The Good with The Bad

In less than two weeks, my daughter will be home from college for the summer. The end of an all male household, plus me, is in sight.
But I don't want to give the impression that having Grace away at college is all bad. I've found one silver lining to this gray cloud. 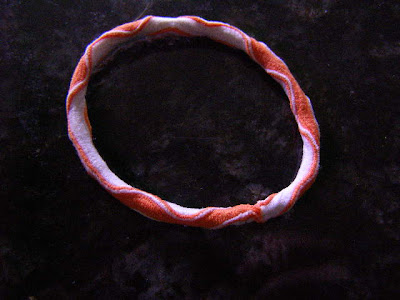 Since she left in August, I have used the exact same ponytail holder every time I needed a ponytail holder. For morning runs or P90X, that ponytail holder was waiting for me. Sometimes, I might have needed to move a brush out of the way to find it, but none of the males in my family took it.
It didn't disappear from my shelf to be lost in a swim bag or pulled from Grace's ponytail in a bedroom to be laid on a bedside table and later swept under a bed. It didn't find its way into a cupholder in a car. I wore it when I exercised, then I would take it out and put it back on the shelf where it remained until I needed it again.
Amazing. One ponytail holder for the entire school year.
Still, for the reward of having Grace back, I guess I'll buy another pack of ponytail holders and welcome her home. It seems a small price to pay.
at May 01, 2011

At least your boys aren't borrowing it with their short hair. I had a daughter too and she was always borrowing things.

Linda's comment made me laugh because it always WAS my boys borrowing my hair bands! Oh it will be so nice to have her home. Especially when you know she's going back. Or aren't you at that point yet?