I worked from 7:30 a.m. to 4 p.m. today and forgot to take a lunch along. My stomach growled and around 2, I texted Tucker, suggesting we go out for Mexican food to celebrate Cinco de Mayo. I got no reponse. When school let out, Spencer texted me to say he was hanging out with Casey. I suggested Mexican food again. He seemed ambivalent.
My widely mixed heritage includes Scottish, Irish, British, French, American Indian and African, but no Mexican, so celebrating Cinco de Mayo was not a necessity. But the day was sunny with pure blue skies, the only break from rain in weeks with more rain on the agenda in the coming weeks. I could practically taste the tangy margarita that I planned to order with my dinner, allowing Spencer to drive us home.
The minute I got off work, I called both boys, my stomach really churning and my mouth watering. If we hurried, we could beat the crowd and sit in the sun. They both blew me off. Tucker said he had Mexican for lunch, Qdoba or Chipotle, no doubt. Spencer said maybe another time, and later came home with a Taco Bell cup. I guess they celebrated in their own way.
I stopped at Rancho Allegre and ordered a burrito. I asked whether they'd give me a margarita to go, but the lightly-accented waitress said, "Sorry, but it's against the law."
Whatever. 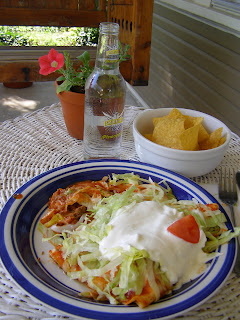 I came home and ate my burrito, chased with a pineapple Smirnoff Ice. Not nearly the bite of a margarita.
This isn't the first time that I've failed to celebrate Cinco de Mayo, Mexico's independence day.
When Earl and I were living in Tampa, we worked with a fascinating group of people. One of our friends, Dave, left the Tampa Tribune for a job at the Miami Herald. As Cinco de Mayo approached, our friend Rosalva, a California native whose family came from Mexico, suggested we take a road trip down to Miami to celebrate Cinco de Mayo.
So we did. We piled into a car and drove the four hours to Miami. We all crashed in Dave's apartment, ready for the big Cinco de Mayo celebration. It wasn't until we were walking the streets of Miami Beach that we realized Miami's latin influence is Cuba, which doesn't celebrate Cinco de Mayo.
It wouldn't have been so bad if the assumption had been made by a bunch of transplanted Midwesterners, but the fact that Rosalva was the ring leader made it a little embarrassing.
Hope everyone else got to sip a maragarita today.
at May 05, 2011

I totally forgot about Cinco de Mayo. I used to celebrate it in Texas. I would have had an average Mexican meal here if I had remembered.

we had dinner at my parents (burgers and potato salad) but for my part I brought tortilla chips and salsa and the ingredients to make strawberry daiquiris. For some reason when the kids were little I would make virgin strawberry daiquiris for cinco de mayo. They were yummy none the less (with a little rum in the adult drinks)

I would have gone out with you!!! I didn't even think of going to a mexican restaurant yesterday!
You could have had your margarita while you were waiting for your food! Hmmm now I'm thinking of Chimichanga and rice! Do you like your margaritas of the slushy variety or the on the rocks varitey, I prefer on the rocks with salty rim.

Linda, I thought you definitely would have gone to a Mexican restaurant yesterday since you love Mexican food.
Sheila, Your dinner sounds yummy and I would have settled for a strawberry daquiri.
Lucia, I didn't want to drink alone. It seemed a little too loser-ish. I'm a slushy margarita fan.