So We Always Remember

Anyone who knows me realizes that I avoid cruelty. I can't stand to watch it or read it. I just don't watch television shows or movies or even read books where people are cruel for no reason.
But that doesn't mean that I stick my head in the sand to avoid the world at large. Yes, I would rather only focus on the positive in the world, but I have to be aware of the news and things that go on to help avoid those same events from happening again.
That's why I agreed to visit Oradour-sur-Glane in the Limousin region of France.
Earl has written a blog post in more depth about the history and I'll direct you there for that, but I wanted to share with you some of my experience.
Our friends Norman and Caroline shared with us a booklet about the town so we could be prepared.
During World War II, on June 10, 1944, German SS soldiers appeared one day out of the blue and killed every person they could find. They shot the men before setting on fire the buildings where they'd shot them. And they locked all of the women and children into the church before setting off an explosion and then burning it.
642 people massacred. Only one woman escaped the church alive by jumping from a 9-foot window. The Germans shot her as she made a break for it, but she lived, hidden among the rows of peas growing in the garden.
It is too horrible to imagine.
And the people of the village, those who somehow lived, or those who were gone to work that day, never rebuilt the village. They built another village nearby so the burnt out village where so many died stands today as a testament to the atrocity of the Nazis.
As we drove toward the village, about an hour and a half from our housesit in Chateaneuf-sur-Charente, I noticed that I was yawning, big yawns. I'd slept okay the night before, so felt like my body was just reacting to the scene I would soon face.
Parking is free and we entered the memorial building, which is underground. It crosses below a road and then visitor climb up to see the destroyed village. Anyone entering or exiting must go through the memorial.


No one knows for sure why killed everyone in the village. Some say there was another village called Oradour where some resistance fighters were working. Apparently, this occupied village had never had trouble with the Nazis there. They all appeared when they were called to the square, except one eight-year-old boy who had lived in Lorraine, France and knew what the Germans were capable of, so he ran and hid in the garden of the school rather than walking to the village square. He survived. The only child in the village left alive at the end of the massacre.

The church, where the women and children died, was of course a central point for visitors. Even though the roof is gone and it stands open to the air, the charred smell remains. A memorial to World War I soldiers is built into one wall, the residents never imagining that their village would sacrifice even more in the second World War than they did in the first, right there beneath the plaque.

Apparently, the men who escaped, fell to the ground feigning that they had been shot and did not move as the Germans continued to shoot anyone who moved or moaned. Then when the place was set fire, they hid and about a dozen or more men managed to survive the massacre.
Like visiting a concentration camp, it takes your breath away to see the signs of such hideous cruelty.
We must be aware of it so we can say never again.
And it doesn't have to be big cruelty, it can start with something as simple as pulling a toddler out of his mother's arms when they arrive at our borders. Separating them as a warning to people not to seek help from the United States, a country that was built on immigrants.
"Immigrants, we get the job done!" from Hamilton  in a line by Alexander Hamilton (an immigrant) and Marquis de Lafayette (also an immigrant at the time).
We can't allow even these easily overlooked cruelties to snowball to the point where it is not a big deal to lock the doors of a church and set it on fire, shooting machine guns at anyone who tries to escape as women and children burn to death.
at May 18, 2018 6 comments:

Review of Paris Ever After 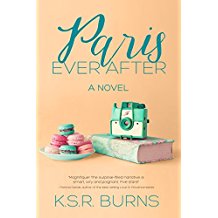 Author KSR Burns lured in readers with her novel The Paris Effect and the story continues in this sequel Paris Ever After, which hits the markets on May 1.
The book covers are magical and the story inside the sequel lives up to the magnetism of the cover.
The main character, Amy, left her husband in Arizona months before after he learned she had jetted off to Paris, a surprise trip, totally unlike her. But after her best friend died, she needed something to jump start her life. She thought she'd be home before her husband returned from his business trip but he discovered her secret trip. When he refused to talk with her about reconciling, she returned to Paris where she attempts to start a new life.
Amy is a bit naive and trusts people she truly shouldn't. It puts me on edge throughout the novel. She ends up living with a woman who had previously drugged her to keep her in Paris. She starts working with a guy who put her in danger climbing through the sewers of Paris. She takes risk that are not normal for a cautious woman like herself.
On her 30th birthday, her new Parisian life is set shaking when she spies her estranged husband checking into a Paris hotel, and her landlord's missing daughter shows up, taking over the room that Amy had lived in. Whatever she thought was settled, suddenly is not.
She has to figure out what her husband wants in Paris and where she will live if she chooses to stay.
Throughout the novel, the vivid background of Paris is a character of its own, along with the luscious meals that Amy shares with friends and frenemies.
This is a fast read that immerses the reader in the midst of French life, rooting for Amy to make good choices, whether that means staying in Paris or returning to her husband.
at May 01, 2018 10 comments: