Thanks to all my new readers who are coming along to watch the fun-- or carnage -- of my adventure of moving to France. If you haven't read my novels, I hope you'll consider downloading on Kindle. Through Sunday, my first novel, The Summer of France, is only 99 cents. I'd appreciate if you'd give it a try and leave a review. Click on the book and it will take you to Amazon. 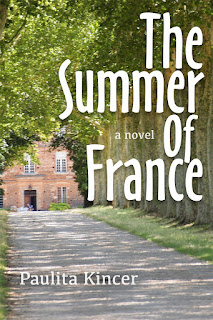 This is only for the U.S. edition. I'll have to figure out how to include the UK edition and let you know when it is reduced.
On to our Friday exploits:
Friday morning the rains had stopped and the sun began to shine in some Biblical Genesis way. 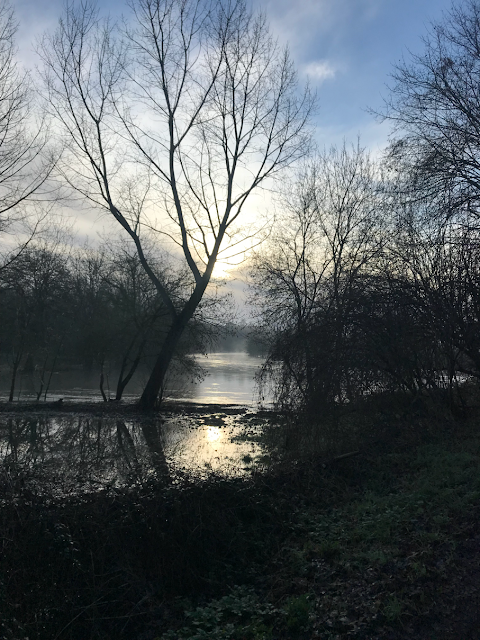 After being stranded on Thursday, we were determined to get out of our isolated island on Friday. First, we took the dogs for a walk, exploring the roads that would lead us to civilization.
The current was fast across the road in one direction, but not too deep. In the other direction, I handed Earl the dog leash so he could hold both dogs while I walked through the deepest section. It didn't top my boots, which come to my knee, so we knew that even though the water looked deep, we could ford that stream. 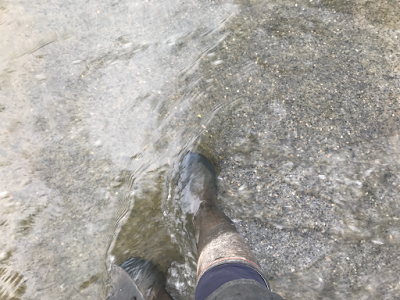 We decided to go to Bordeaux, which is about an hour and half away. We were missing cafe life and pictured sitting in a square with the sun beaming on our faces. After we showered and readied the dogs for their time in the house alone, I pulled up my weather app.
It predicted heavy rain in Bourdeaux! How was that possible when the sun had forced us to don sunglasses? 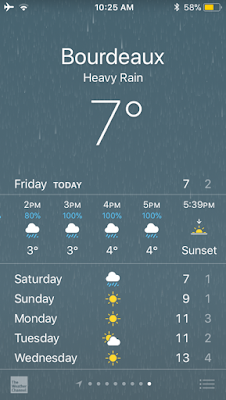 Can you see the mistake I made when I searched for the weather in Bordeaux? I misspelled it and got a Bourdeaux somewhere else in France -- 400 miles away. But we didn't catch the mistake before we ditched our trip to Bordeaux. We needed to stay in the sunshine.
We decided to drive to Jarnac instead because it had a market going on and it's less than half an hour drive. Plus it has a Cognac house there -- Courvoisier. Our host served us some cognac the night we arrived. I think it must be an acquired taste. I had only a sip and felt the burning through my throat. Although, perhaps I should try it as a cold cure when I'm not drinking pastis.
I plowed ahead through the shin-deep water with our Citroen C3 and safely arrived on drier ground. Earl and I shared a fist bump at making our escape from the flooded island.
Driving is when I get my most French practice because the GPS is in French. À la fin de la route, tournez à gauche, she'll say (at the end of the road, turn left), allez toute droite (go straight ahead) or dirigez à  droite (veer to the right). Living in the country definitely curtails my French practice. Sometimes we share "bonjours" with the men fishing along the long or other residents walking along the country road. For the most part though, we're isolated with our English speaking.
We made it to Jarnac and speedily found a parking spot at city hall. The sign warned only 90 minutes of parking, but the hours were from 9-12 and from 2:30-6. Luckily, we parked at 11, so we had until 3 to move the car. Thank goodness parking wasn't enforced during the requisite French lunch hour. 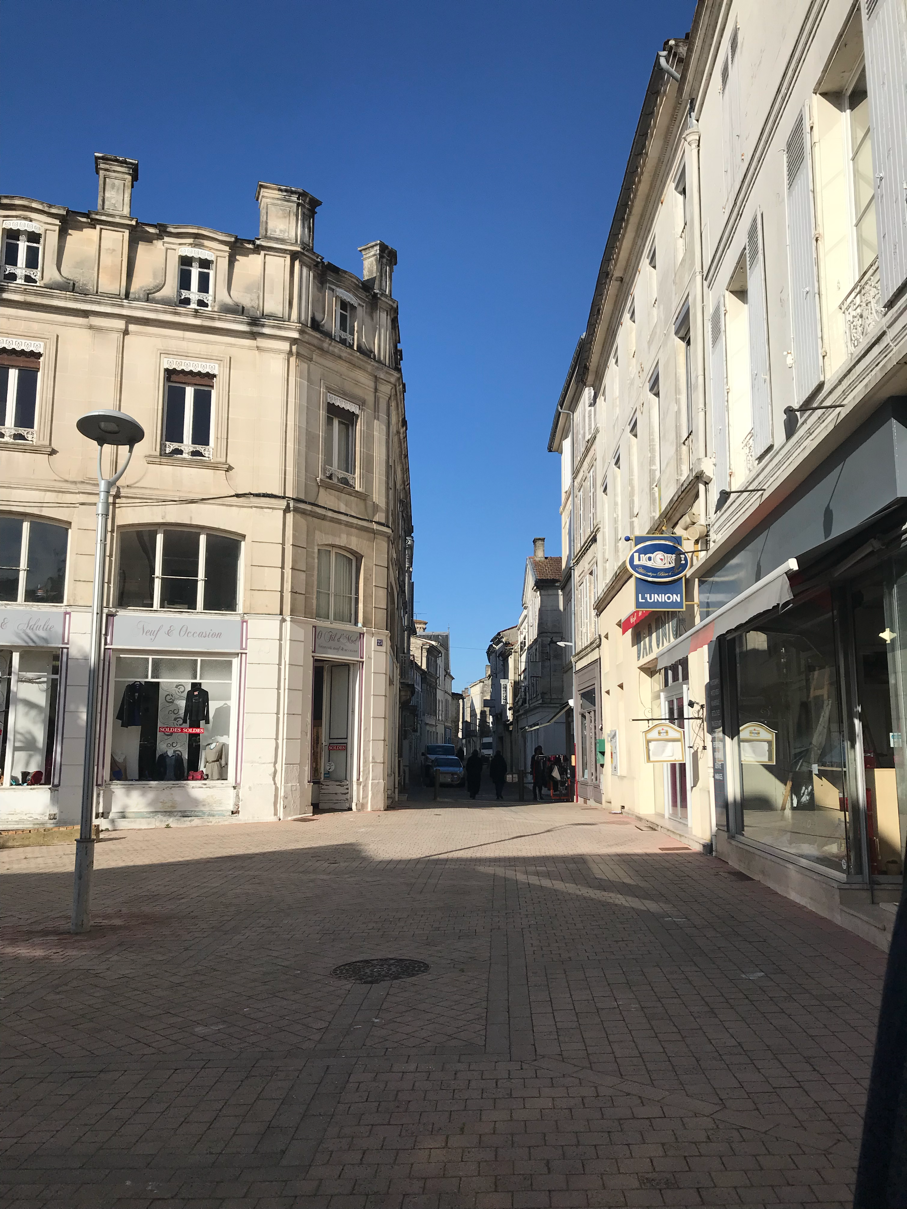 Inside city hall, we asked for the location of the market, le marché, which wasn't apparent. In the summer, the markets fill up the "centre ville" but in the winter, this market is inside. The man directed us down the hill and to the left (more French directions). We walked into "les halles" where we were immediately assaulted with the pungent odor of fish. Once our eyes stopped watering, we saw fruits, vegetables, a coffee bar, meats, cheeses, bread and pastries. 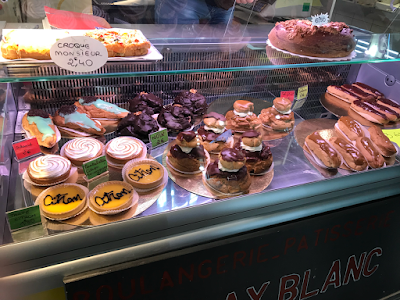 We loaded up on baguettes, some croissants for breakfast the next day, two types of cheese and some luscious red tomatoes. Once we returned the bag to the car, we still had some time to kill. We decided to walk around Jarnac and read the lunch menus in preparation for our next big event -- lunch. 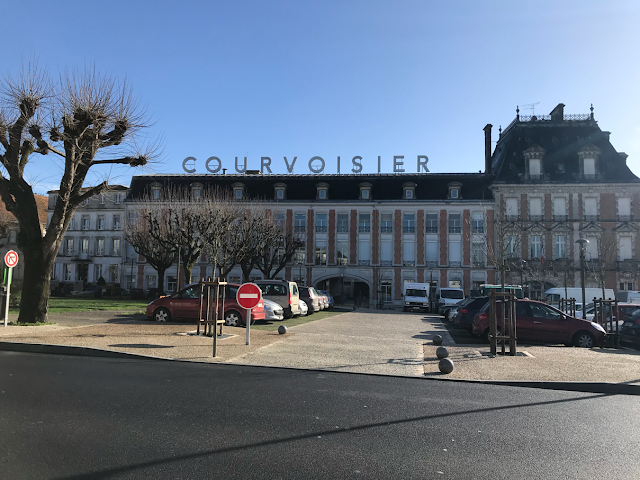 The Courvoisier Chateau, which means castle, but apparently when you make alcohol the house is called a chateau, too, stands along the river, so parts of the riverwalk were underwater here. They give tours from May through September, but during the winter months, you have to reserve ahead of time. We might look into a tour of a cognac maker in the next few weeks just to see the process. 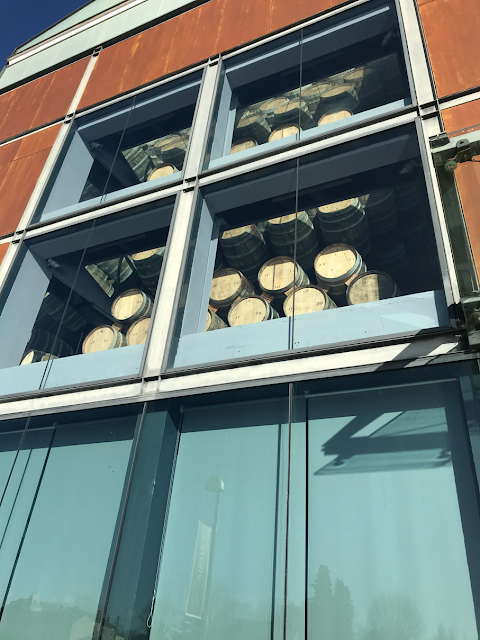 Through the window, we could see the barrels of cognac. I wonder if these are actually filled since the light and heat from the sun might affect how the alcohol ages. I guess I'd have to take a tour to find out.
Jarnac didn't have a lot of open restaurants to choose from, but we ended up at l'Alambic. We usually try to choose a restaurant that  has a menu of the day. Frequently, we end up paying between 10 Euro and 13 Euro for a three course meal if we go with the menu of the day. This restaurant had several things on its "menu" that I didn't recognize, so we ordered individual entrees. A goat cheese and honey salad for both of us. 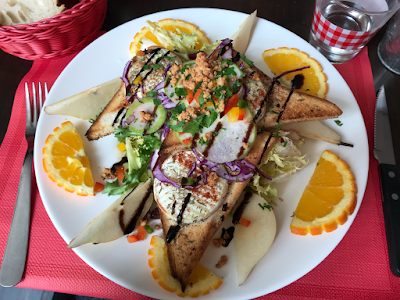 You can see the goat cheese on toast, along with slices of oranges and pears.
After our lunch, we stopped at the pharmacy for more Fervex. I'm feeling better, but my cold may have mutated into a sinus infection. I've promised myself if I'm not feeling really well on Monday then I'll find a doctor. But this Fervex helps relieve the symptoms beautifully.
When we got home, we took the dogs for a long walk, Earl still carrying short Jeff through the deep parts. We waded along the road and noticed some swans paddling toward us. They were amazing.
If the fields hadn't flooded, we wouldn't have captured this magical swam moment. 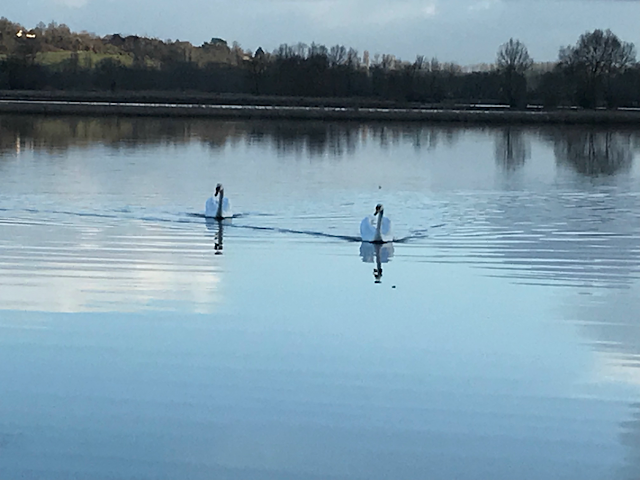 I took several shots of the swans and I wondered as I watched them if they might not have been mistaken for the Loch Ness monster as they dipped their heads in the water in search of food. They are huge.
Another pair of swans flew in and landed as I tried to capture their flight. 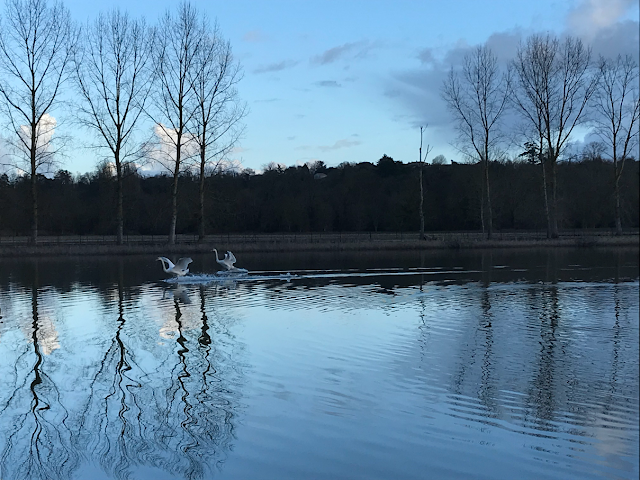 As we walked on wading through the rushing water, we came to a church in Angeac-Charente. The sun was setting just behind it and the clouds looked ominous. 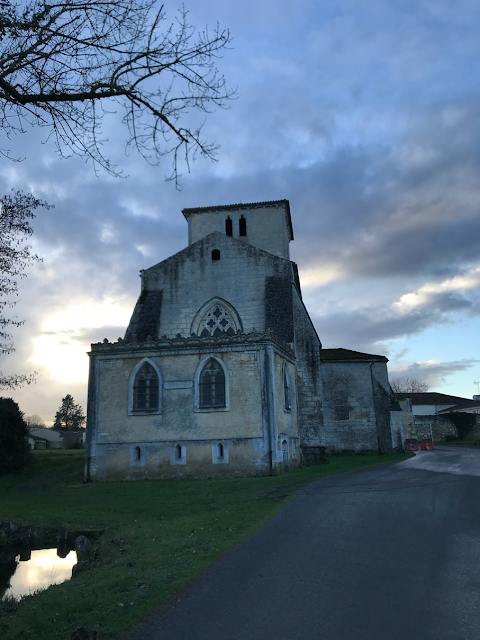 Our hosts had told us about this church, but when we read the sign on the door, it looks like they aren't having mass here during the winter. The local mass is at 6:30 on Saturday in another nearby village.
Walking home, having actually reached my 14,500-step goal for the day, I felt thankful for the flood which brought me the swans and the magical sky, and grateful for a day of good meals and wet dogs.
A day in France living my dream, cold or no cold.
at January 27, 2018 2 comments: