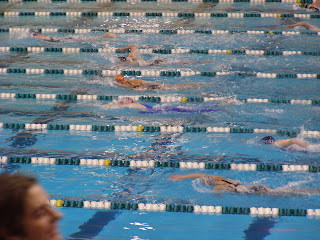 I was feeling pretty proud of myself as a parent this weekend as I drove two of my children to a swim meet through the dark morning. The clouds were piled up like mountains and the light was peeking through attempting some sort of midwestern Northern lights show. We left the house a little after 6 a.m. About an hour later, I was standing at one end of the pool with a stopwatch in my hand as Grace swam the 500. That's 20 laps and it is one of her favorite races. She's pretty good at it. Some of the girls from swim team were at the end of the pool turning cards that counted her laps. She was on 13 when she seemed to fall behind the girl next to her. And, as she reached the end of the pool, rather than the smooth flip turn with a glimpse of her legs flashing over her head, she stopped and held onto the side of the pool. I saw her put her hand to her mouth and cough.
She must have gotten choked on the water, was my first thought as I stood there, glancing down at the watch. This was really going to mess us her time. The girls she had been ahead of flipped and headed back to the other end of the pool. Some of the girls were only on lap 11, so if she got going she could still beat some of them, I thought. Our coach knelt down in front of her and was talking to her. Then a white-outfitted offical bent over to talk to her.
The coach made a motion with her hand, calling me down to that end of the pool. I took off the watch, laying it on a chair next to the dad who was timing. "Sorry I can't help you with Nick," I said as I walked away. By the time I got to the end of the pool, Grace was sitting on the bleachers and the coach was glued to her side. Her friends on the other side. I knelt in front of her. Okay, I was still feeling a little annoyed. So she wasn't going to have her best time, she should have finished.
"Do you want the paramedics?" the sheriff's deputy on duty asked.
I felt confused. Why? I looked at the coach.
"Yes," she told him.
Grace seemed pale but she was upright; she was breathing.
"I had to carry her out of the pool. She couldn't support any of her weight," the coach said. "She couldn't breathe."
So the paramedics came and Grace seemed dazed. They said what people who aren't athletes would say, she probably over exerted. But she swims this race almost every week. She was scheduled to swim the 1000 later in the day. This should have been nothing.
We talked about lungs and heart and, as a mom, I began to worry. Those football players who collapse during summer drills. All those kids whose hearts seem healthy until they just stop beating and all the teammates talk about what a kind person the kids was. I was torn between encouraging Grace to try again and wanting to keep her immobilized. When she walked, I held onto her sweater, like that could keep her from falling down.
We saw a sports med doctor on Monday. She ordered a stress test to see if Grace has sports-induced asthma and she'll do an EKG too. Then a friend started talking about whooping cough and the recent outbreak that started with a swim team so we went to see the pediatrician. The pediatrician, not our regular doctor, swam competitively through high school and college.
"Sometimes if your oxygen gets low and your CO2 gets high, you'll start to hyperventilate," she explained.
I practically saw the light bulb over Grace's head. "I'm not dying?" it seemed to ask. And the cold she'd been fighting became nominal. She could be a swimmer again.
And I could take a deep breath and be just a mom again -- not the best or the worst, but a mom.
at November 13, 2007 2 comments:

"Well, what does your husband think about the gas prices?"
I was stunned into silence. This questions was beyond my grasp in so many ways as I sat on a hard metal chair against the wall of an elementary school. I had been there since 5:30 a.m. when we set up the 3 voting booths and measured 100 feet away from the doors, sticking flags and warning signs into the ground. No one should pass out campaign material past that flag. Then I was obligated to stay in the room with these four other people for the rest of the day, until we packed up the voting machines and turned in the results. I was doing my civic duty by working the polls.
The one guy working with us was probably mid 50s with hair nearly reaching his shoulders and a beard that he let grow long from his chin/neck area. Creepy. And he was the sole republican. (Can Republican and sole/soul go together?) The gas price question was obviously one of those, "do you have a husband?" questions. Ick. The man then lectured me on the fact that if he drove to Springfield - 40 miles away and 40 miles back - he could find gas for $2.50. I'm sorry, who has an extra 80 minutes to drive to fill up the gas tank and save 50 cents per gallon. Time is money, people!
The county had sent out letters to democrats pleading with them to volunteer at the polls. Since the majority of the precincts went democratic during the last election, the republicans could not be in charge of the polling places and they were desperately short of democrats. My husband (who has no strong opinion on gas prices) said he didn't have to work until the evening on election day. Why didn't I go ahead and volunteer to work. (Oh, the reasons I could come up with now!) So I did.
The gas-price guy had worked the polls for years. He came prepared with a cooler full of food, a grocery bag and a 12-pack of Sprite. Yes, 14-hours is a long time to work, but who is going to eat that much food? I'm figuring I need lunch and that's about it. As the day wore on, he walked back and forth with food. Strawberries smothered with sugar. A sandwich (he brought the whole loaf of bread and made the sandwich). A bowl of steaming soup. "And I've got two more cans of this!" Finally, around 6, he walked past with a bowl of ice cream. Ice cream? I'm going to be gone 14 hours and I pack ice cream as a snack? When anyone commented on his food, he would respond: "You don't bring it, you don't eat it."
Not that any of us were after his food. Only one woman, who was on a walker and had to take 15 pills each morning, was wishing for something of his. She needed a Sprite or clear liquid to drink before she could take her pills. The pop machine in the teacher's lounge was broken so she was out of luck. The poll worker guy did not offer to share his 12-pack of Sprite. Instead, he reminded us, "You don't bring it, you don't eat it."
When I went out for lunch, I stopped at a coffee shop for myself and grabbed a San Pellegrino limon drink for the woman waiting at the polls.
She'd had knee replacement surgery in the summer, but it became infected and she had to go back to the hospital to have it scraped before spending a few weeks in a nursing home learning to get around. Now she was up to a walker with tennis balls stuck on the back legs to keep it from scraping. She had long, numerous braids and talked about her kids, ages 21 and 22. Her mouth turned down at the edges and she was missing some front teeth. She thought someday she would like to move someplace warm, like California. I went to get a blanket from the back of my car so she could cover up as the elementary children ran in and out the school doors, letting the cold air in. She didn't mind that the polls weren't busy. She was getting paid to sit and do nothing. At home, she usually spent the day watching TV. Later, as she was talking, she mentioned her age. She was 45. Just a year older than me.
Not many people voted at that precinct on Tuesday. Not even a 20 percent turn out. But I did my civic duty and learned a few lessons about people who are outside my bubble.
Don't look for me to volunteer again, though, come the March primary. I think I'll just drop by with pizza for those other dedicated workers.
at November 08, 2007 1 comment: