No one expected Christmas 2020 to be normal. Why should it when everything has been turned upside down this year?
We could have flown to the States for Christmas, but with 200,000 new cases a day, that seemed a folly.
Also, we wouldn’t risk seeing my parents and passing on the virus to them if we picked it up in our travels.
Grace and Jack were in Dublin. Our sons were in the States. I knew that Ireland was allowing Americans to enter, so I proposed we all meet in Dublin.

Spencer and Kaitlin decided it was too risky. They were very mature about it. Tucker, faced with a Christmas alone, decided to join us.
We knew it wouldn’t be a touristy trip, just a family get together. 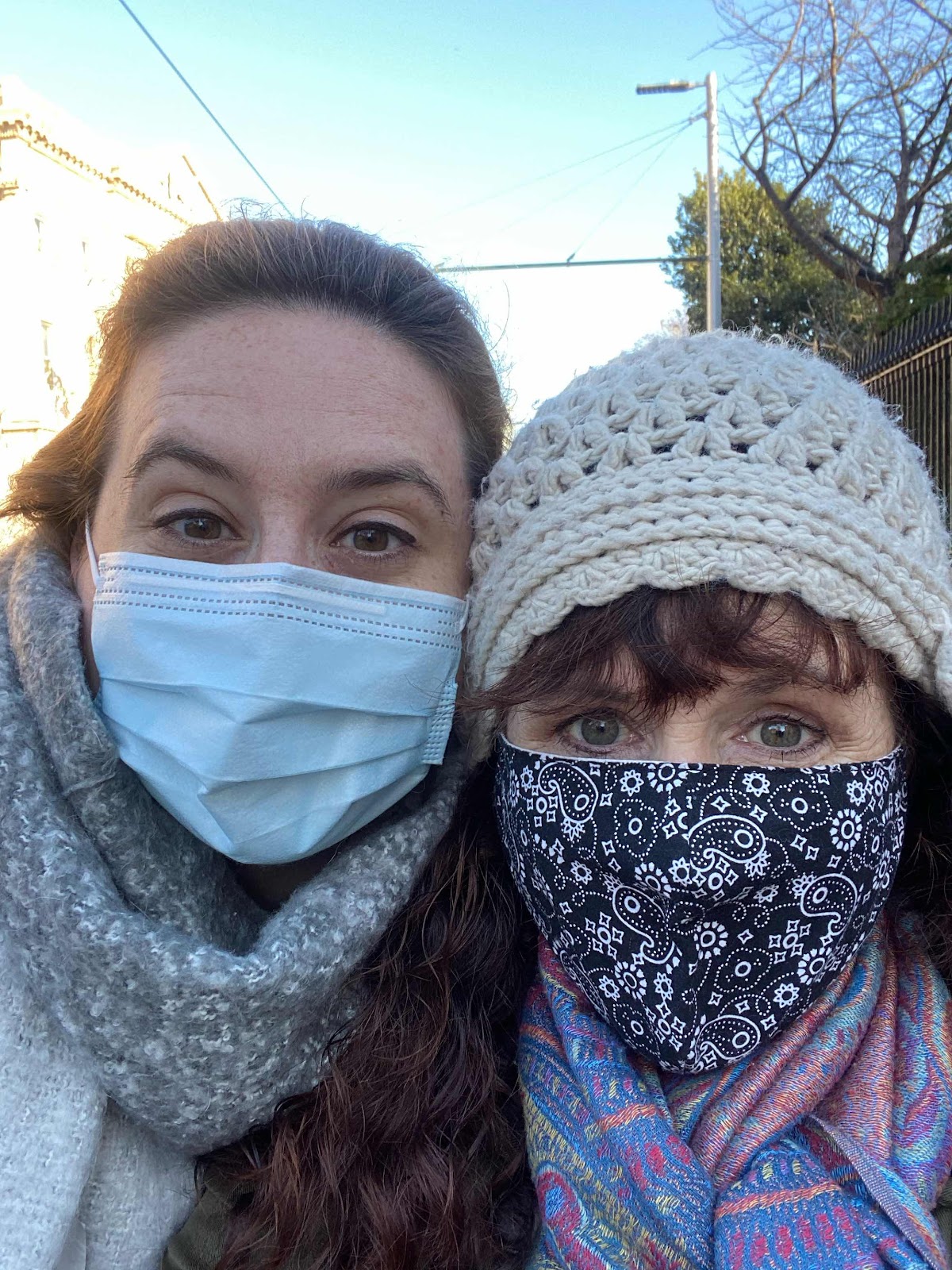 We rented an Airbnb. We sprung for an extra bedroom because Tucker often complains that as the only single person he gets stuck on the pull-out couch.
The apartment was less than a mile from Grace and Jack’s apartment.

We all arrived on Sunday December 20. Earl and I flew from Barcelona, a couple of hours from our home in France.

The Covid situation was changing quickly. Suddenly, France and a number of other countries were closing their borders to the UK. Of course, Ireland is in the EU, not in the UK, but it made me nervous when friends got stranded in England.
And Spain declared that everyone visiting from Red areas needed a Covid test to enter. It was kind of a puzzle because Ireland, with a low number of cases, isn’t a red area, but France where we originated, is.
The rule was that we needed a test 72 hours before the flight, which would have been Christmas Day. I couldn’t find any place giving Covid tests on the day after Christmas and the only tests at the airport I could find were drive-up tests. We didn’t have a car.
We decided to risk it, calling ourselves in transit to France. We have our carte de séjour or résident card, an electric bill to prove our address, and our parking ticket to show that our car was awaiting us. We would promise to make a quick getaway from Spain.
So all of this was going through my mind as we tried to enjoy a family Christmas.

We managed to cook a few meals on the wonky apartment stove and Jack cooked a delicious beef Wellington for our Christmas dinner. I had to make Tucker’s favorite holiday dish corn casserole but there was no corn meal or flour and no creamed corn to be found in Ireland. I made my own creamed corn and found a recipe that used flour.
Grace made a delicious apple pie. 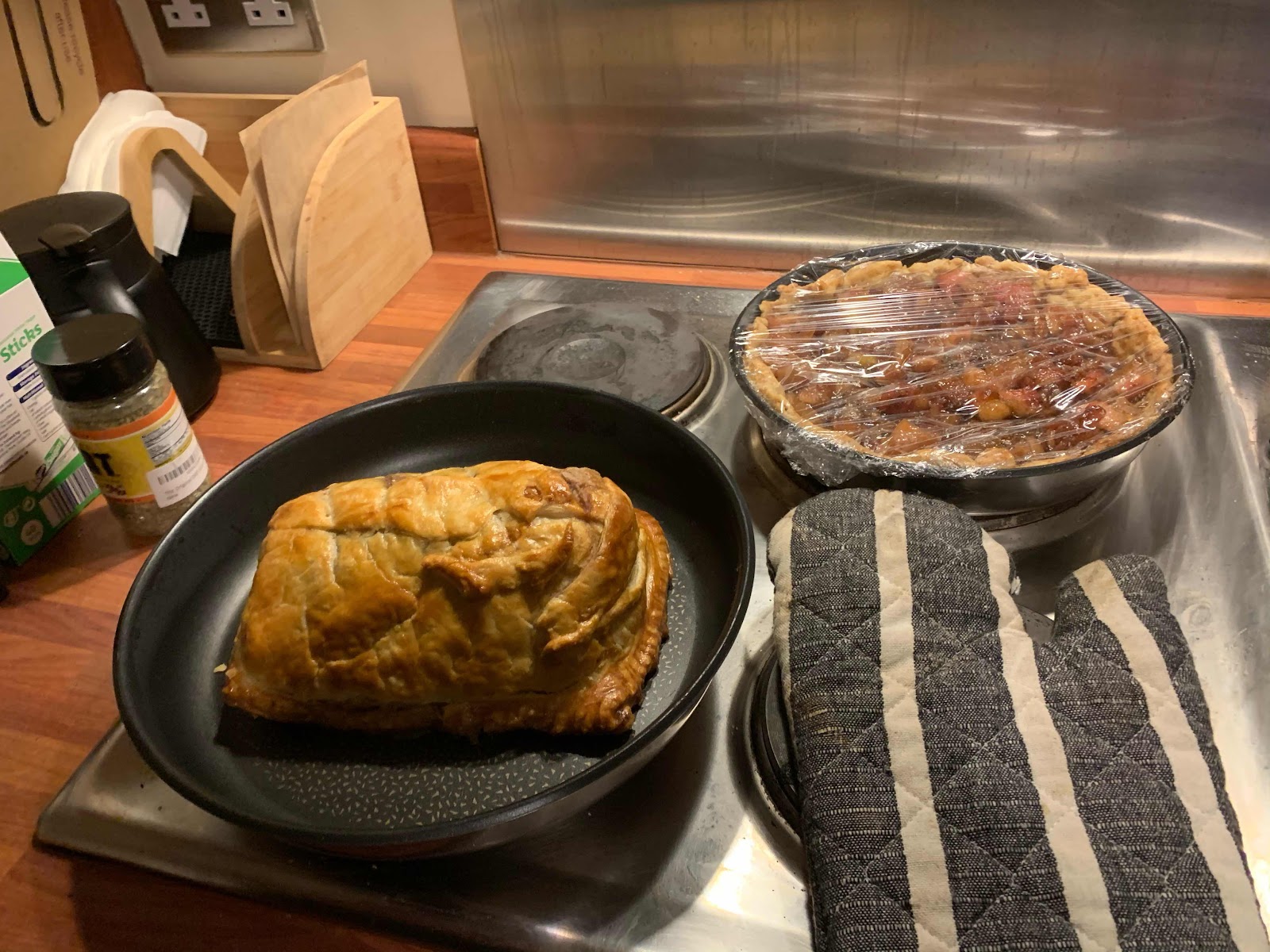 We played family games most nights and had takeout a few nights. We walked and shopped and watched in amazement as the sun set each afternoon at 4ish. 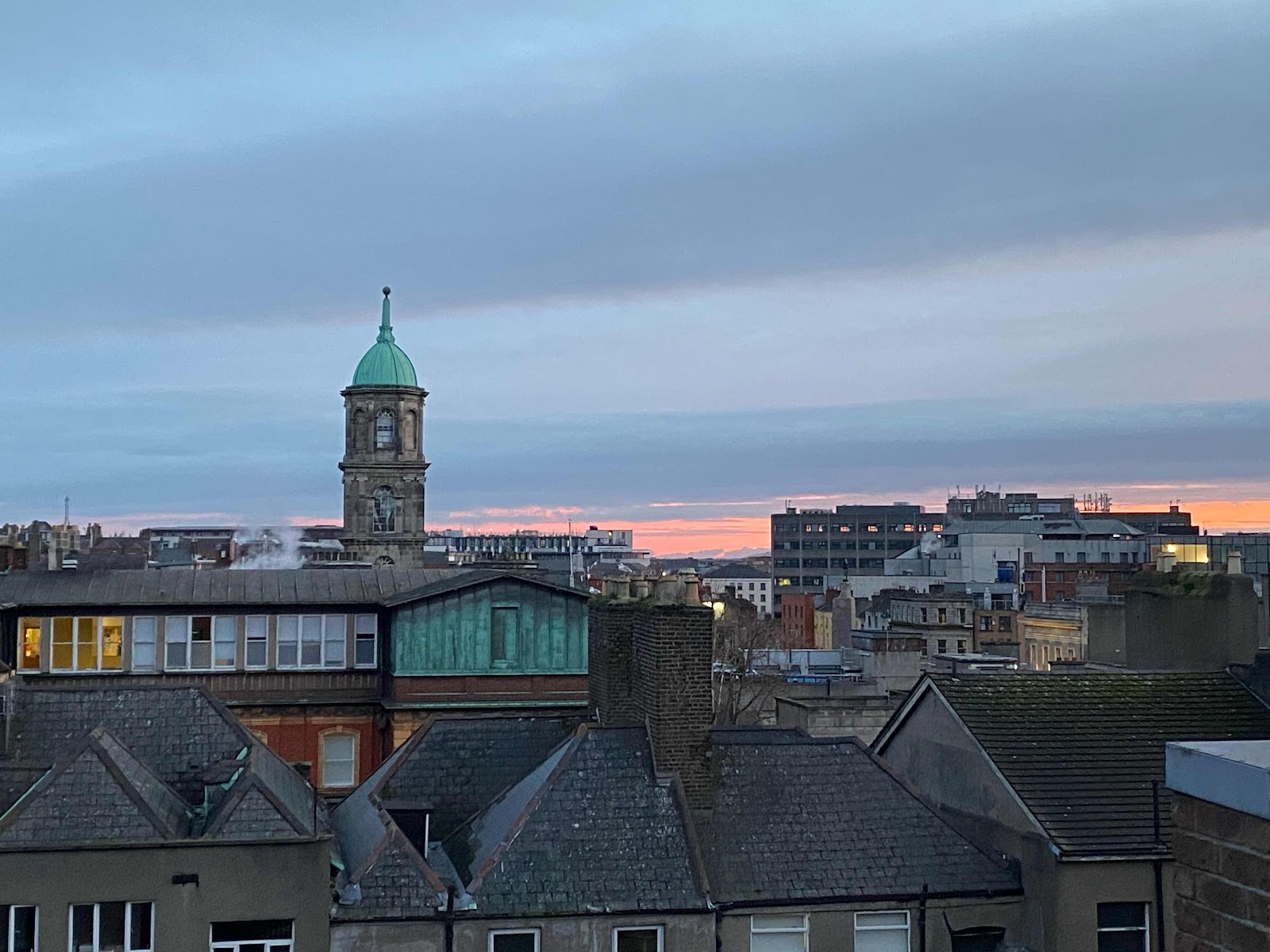 It was great to be together, even though we missed Spencer and Kaitlin.
Tucker flew out this morning to the news that the US wasn’t accepting travelers from the UK. I told him some people in the US might not know that Ireland isn’t in the UK.
As I write this, he’s on his plane, nearly to New York.
Earl and I are waiting for our flight. The airline checked to see if we had the necessary health form required by Spain. We do and they waved us on.
Fingers crossed that by the time you read this, we have safely landed in Barcelona and roared off in our little Audi back to France.

People always ask, “What do you miss from home?” 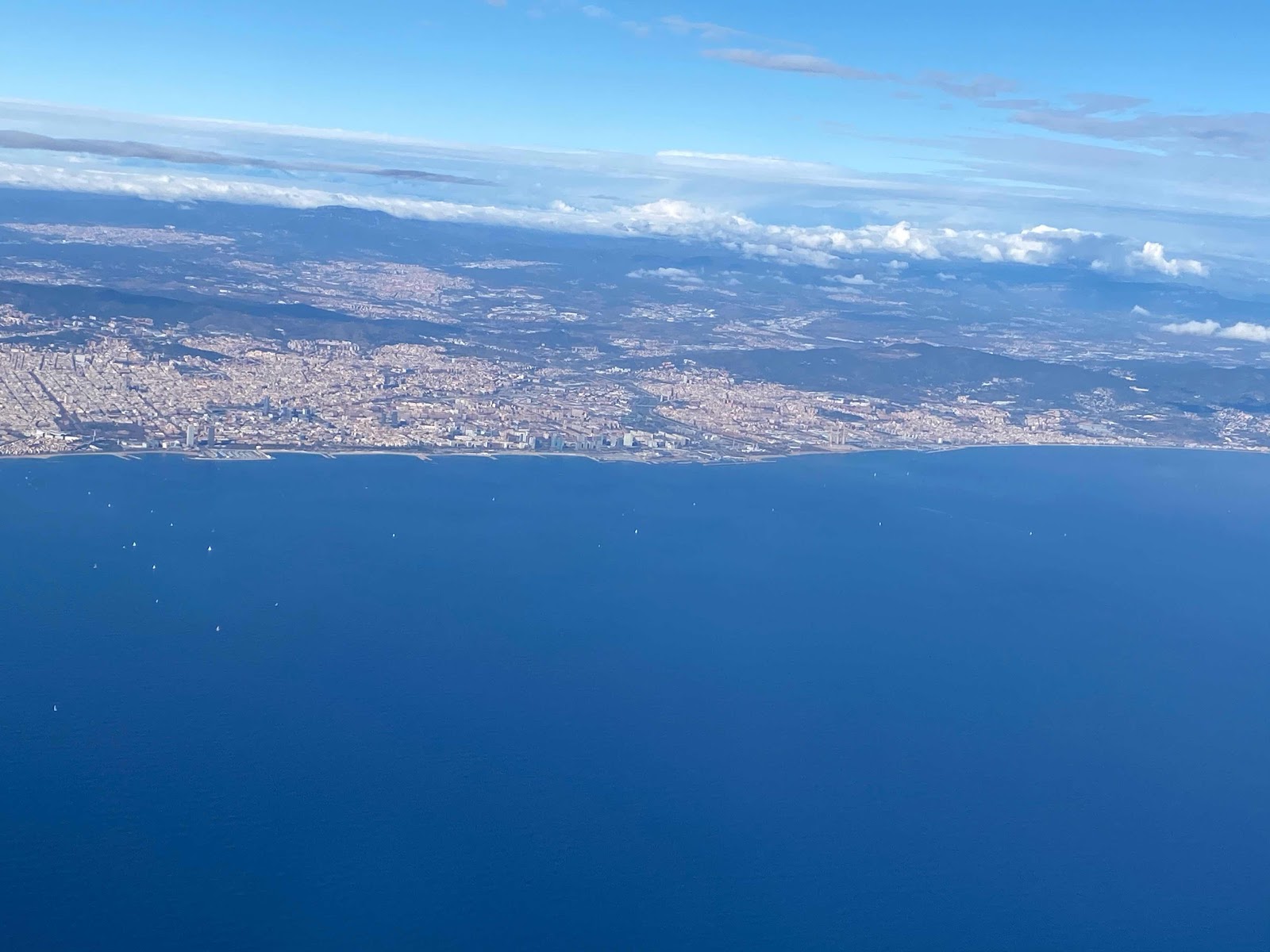 My kids, of course.
My parents and family and friends.
But what things are gone from my life?
Until recently, bacon.
Bacon here in France is called poitrine, but it is more like Canadian bacon. It doesn’t crisp up.
British friends have given me streaky bacon, but again, it’s more ham like than bacon.
So I was overjoyed  when I found poitrine fumée (smoked) fine (thin sliced). It looked like American bacon but I couldn’t be sure.
I took it home and threw it in the skillet one morning, along with French toast.
As soon as I saw it cooking, I texted two American friends with pictures. So happy to share my news that I let the bacon get a bit dark.

“Are there bones?” One American friend asked and I had to laugh.
We have had gristle or bacon in the poitrine.
No bones!
What else do I miss here?
Bagels.
I tried my hand at making everything bagels, but I didn’t boil them as soon as I shaped them, so they rose again and didn’t hold their shape when I did boil then bake them. Still, they tasted good.

And sometimes I wonder how I managed to move from the 21st century to a place where most people don’t have clothes dryers.
I thought about that as I spread a white sheet over a radiator and imagined my grandmother being horrified that I’d given up the luxury of a dryer and fluffy towels, instead watching Earl hang clothes on the line on sunny days or drape them over river the drying rack.
It has been 10 months since I was in the States.
I might find bagels and bacon and even a clothes dryer, but more importantly, I’m about to spend a bit of time with two of my children.
They’re awaiting us in Dublin right now as Earl and I fly direct from Barcelona. 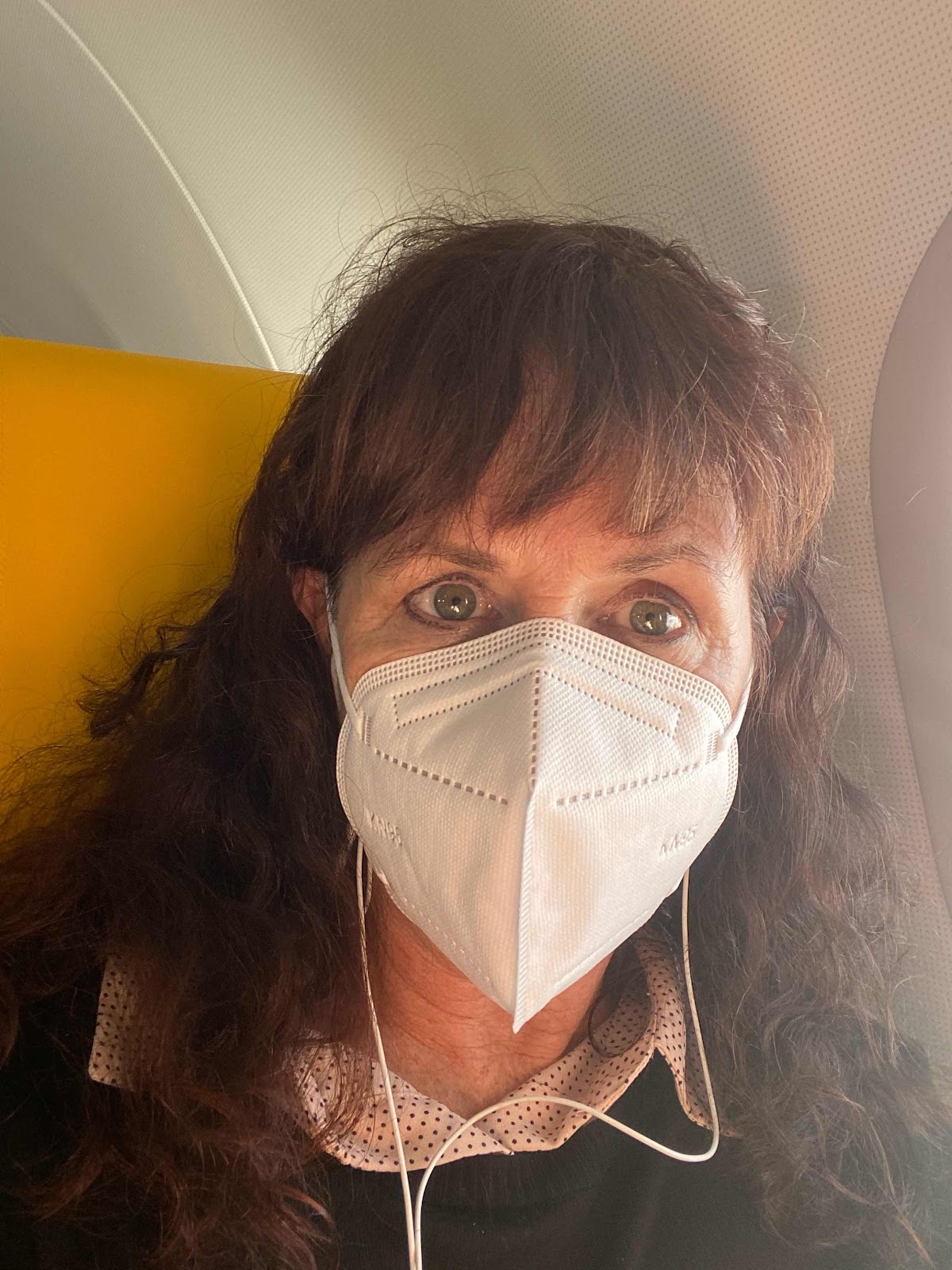 On Facebook, a memory popped up showing a set of pictures from 4 years ago. The temperature was 14 degrees Fahrenheit (-10 Celsius), we had snow and our house’s big front window shown with Christmas lights.
I had been scrolling through Facebook while I lay in bed in the dark with the shutters closed. I hadn't been walking or running lately after another knee injury. So I got out of bed in France and determined to take a walk and some pictures to contrast life then and now.
Today
I chose a flat path that I could walk and as I rounded a corner, I heard the tinkling bells of sheep and a baa. I knew where they lived and walked around to the backyard to see two of them standing on an old concrete well.
That’s something I never saw on my runs in Ohio.

I continued my walk and the faint pinks of sunrise still shone over the mountains.

The river continues to rush to its destination in spite of COVID-19 and confinement and curfews.


This path looks so welcoming but it leads up a mountain and the path is unsteady with lots of stones, not good for my knee, so I resisted.


The orange and yellow berries reminded me of a photo I took 4 years ago, but the berries in Ohio were covered with snow.
4 years ago
The pictures from my Ohio life made me feel homesick.

My life in France is very much changed from that Ohio life.

But the sun still decorates the sky every morning. And even though the air feels a bit cold when I go out in the morning, the temperature is in the mid-40s Fahrenheit, about 8 Celcius, which is a far cry from 14 (-10). So I may long for those days, but I probably wouldn't get out of bed and go for a run like I did on that morning four years ago.
In every new life, you gain some things and lose some things. My goal is to be able to see the beauty of whatever life I'm in.
at December 15, 2020 No comments: