"What was your good fortune?"
That's the question my mom asked yesterday. Last week I had forwarded one of those emails with an angel and floating dollars that promised good fortune if I sent it on to friends.
My mom emailed that she was notified she won a drawing she had entered last year and had won big bucks.
"So far, my only luck is this email from you," I told her. But, that was early in the day.
That was before the Junior Varsity basketball game where Spencer played and won.
That was before the swim meet where Grace won both her individual events and the relays.
That was before the dark drive home on the cold, slick roads and the phone call from Grace.
"Mom, I just wrecked the car. I've got a bloody nose. I'm so sorry. I think it's totaled."
I wasn't home yet, so I swung by the house where Earl hopped in the car. We got on the highway and could see the red and blue lights flashing not far away. We had to exit and get back on to reach her.
That day, I had suggested she drive my car. The newer car. The Pilot sat higher up and I thought it might handle better. She was driving home from the swim meet with two friends. She started to get over and the friend in the passenger seat warned of a car in the lane. She swerved. The story there is fuzzy. She hit a guard rail on the right -- a guard rail that prevents cars from driving into the wide stretch of river there. Somehow, the car careened across three highway lanes and ended up against the concrete median in the middle of the highway, facing the opposite direction. No cars hit her in this wild ride. She hit no other cars.
The air bags deployed and the girls dissolved into tears.
"Call 911." I had told her as I rushed out of the high school gym.
When we got to the accident, the girls were in the back of the ambulance with two cute medics. I signed a form that Grace refused treatment. They didn't think her nose was broken. The other girls weren't hurt, but one was leaking tears.
I hugged her, because she was the closest to me.
Grace was calm. I was surprised and proud that she wasn't hysterical. She talked with the police officer. The parents of one of the other girls showed up and gathered them into warm hugs and the heated car. They took them home. Grace returned to our car with a citation for failure to control and then she cried.
"I could have killed my friends," she sobbed. "I thought I was going to die, like Aunt Millie."
My husband's oldest sister was killed in a car accident by a drunk driver.
I held her hands and then dropped her at home before I followed the tow truck and the mangled car to the auto body shop.
So, if my mom asked today, "What is your good fortune?" I could answer.
"I have my daughter."
at January 10, 2009 5 comments: 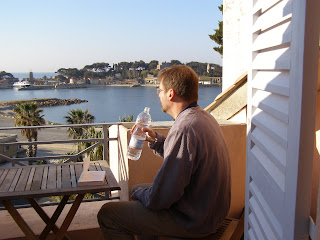 Yesterday, I apologized to my husband for something that happened 15 years ago. It's not like he was holding a grudge, but I felt the urge.
Lots of things happened 15 years ago, most noticeably, our second child was born. Almost exactly 15 years ago, our friends the Kamikazes http://www.suburbankamikaze.typepad.com/ visited us in Michigan where they, childless at that point, went skiing with my husband while I stayed home with the kids and dropped one on his head, resulting in an emergency trip to the doctor where the car broke down and two guys in a pickup truck picked me up... but I digress.
The thing I apologized to my husband about was that span of about a month where he contemplated going to law school. He was working as an editor at a small newspaper. I was staying home with the two-year-old and newborn. Life was a blur to me and suddenly, he wanted to make major changes.
I remember saying that I wish he had told me he wanted to go to law school before the birth of our second child. We might have held off on that decision. (Ouch!) I'm sure that comment didn't have a huge effect on him though.
I recall that he talked with some good friends who were finishing law school and they told him that legal assistants were making as much as lawyers because of the glut on the market. I'm sure that's what convinced him to trash his dream of being a lawyer and continue his daily walk to the local newspaper.
Last week, my husband turned 53. He told me, "I'm getting really tired of life in the newsroom." I gave him a grin with too much gum and told him that we only have nine years to go. Nine years until the youngest will graduate from college. Nine years, according to Quicken, before all of our bills including the mortgage are paid off. Nine years and we will be just like the couple we were before children and mortgages and excessive age brought us to where we are today.
So, I'm sorry, honey, that I put the kibosh on your dream. Maybe you should have left me right then and gone in search of your desires, the ones that don't include me. But, I'm glad you stuck with me, and the kids, although they'd never say it, are glad you're here too.
Now I promise to work like crazy on my dream, so I can release you from the nine more years in the newsroom. Promise.
at January 02, 2009 No comments: