The worst thing about sending my kids to school, aside from all of the school things, is that in one fell swoop I lost contact with all of my friends.
When we were homeschooling, hardly a day passed that we didn't get together with friends to play or meet at the rec center or have classes at the library or go on a nature hike/kickball game. The days were filled with laughter and yelling and conversation.
These days, after 8 a.m., my house is mostly quiet. When I'm home, I work in the solitude, shooing the cat off the mantle, turning on another load of a laundry. I don't mind the quiet and sometimes will stretch out on the couch for an afternoon nap. But I do miss my friends, those homeschool moms who helped me brainstorm so many childrearing problems.
And so, I'll think to myself, we should go out for coffee or lunch. But then I remember the problem. That mom still has all those kids at home. She can't just dump them and meet me. I can't invite her and the clutch of kids to my house because my kids aren't here to entertain them. And, I'll have to assume, my homeschooling friends figure I wouldn't want to visit their houses with the passel of kids there. Who would want to leave a quiet house for a house full of kids (to steal a turn of phrase from Seinfeld)?
So, I'll sit here in my quiet house, reminding myself to get my work done while the kids are gone, and hope for more days like the snow day, when I invited some moms of schoolgoers over to play cards and we had pina coladas in the middle of the afternoon.
at March 12, 2008 3 comments: 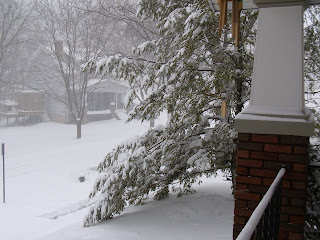 Somewhere back in my childhood is the memory of being snowed in. I think I can remember my father not going to work because of the snow, but it somehow gets mixed together with my best friend from college being stranded at our house too, so I know that different blizzards have mingled. But I felt that same excitement yesterday when the winter storm warning was changed to a blizzard warning.
As a child, I can remember the weather man's face on the news when he warned that the barometric pressure was dropping. That was a sudden and scary blizzard. The one this weekend was just heavy snow that refused to quit.
I was prepared to hunker down in the house, a nice fire drying off the wet gloves and boots as the kids came in from their sledding forays. I got up at 5 and turned on the TV so I could see the cancellations, confident that the championship swim meet over an hour away would be put off for another day. But when the call didn't come, we piled into the car, leaving at 6:45. The kids busily texted their friends.
"Where r u?" they asked.
Not going, came one response.
Then, "Turning around," from the friends about 20 miles ahead of us. The roads are too bad. And the highway was covered with packed down snow. When we got to a smaller route that didn't have buildings on either side, the blowing snow was piled up, scraping the bottom of our Honda Pilot. We began the route home, calling the swim coach with the bad news.
So today, as the kids arrange sledding dates, there is a vague feeling of missing something. Being stranded in the house with peanut butter cookies and cocoa, card games and a curious kitty isn't as satisfying because we have that left out, nagging feeling, knowing that in an overheated natatorium, the kids' friends are swimming, possibly making their zones' times.
And our kids ask for rides, to a friend's house three blocks away or to the sledding hill. Another is picked up to go to a farther sledding hill. And so the bunker mentality of the blizzard is broken as the kids disperse and my husband stops to get a movie for those of us who won't brave the snow. Okay that's just me. But now I'll always remember the blizzard of 2008 as the year that I watched Italian for Beginners.
at March 08, 2008 No comments: