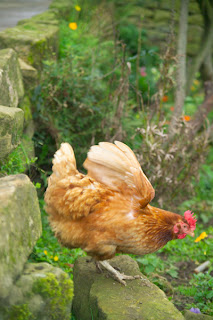 The rain was blowing almost sideways while I sat in the parking lot at the zoo waiting for Grace and her friend Eleanor. They came out the exit, their look alike heads bent against the rain,although Grace was several inches taller. Eleanor's hair a little redder, but the haircuts the same with a curtain of bangs pushed to the side ending along their cheekbones and the rest stretching in choppy layers to their shoulders. They were dressed alike too in their khaki pants and khaki zoo shirt with the green logo. And they were smiling. Tonight was the Girl Scout sleepover at the Holiday Inn across the street from the University. No parents, just two leaders -- three doors away.
They opened the rear door and blew into the car with some rain.
"Hmmm, bagels," Grace said, spotting the open Panera box. She started spreading cream cheese on a cinnamon crunch while I started driving. I still had to drop the girls off at the scout leader's house, along with the leader's son who was in the way back of my car, and get my sons to swim team. Five kids in the car, 13 bagels eaten or fading fast.
"How was the zoo?" I asked. The girls had complained that their volunteer time at the zoo often resulted in a lot of dish washing. They were constantly washing the bowls that hold the animals' food. One held pinkies, which are some sort of embryo mice or something.
Why doesn't the zoo have a dishwasher -- you know, a machine like GE or Kenmore? Grace wasn't certain, but she said the washing machine sits in the middle of the hallway, so they may be lagging on some essentials.
"Good," Grace said, her mouth full of bagel while she answered my question about her day. "We got to feed the chicken."
"Chicken? Why does the zoo have a chicken?" And why isn't the chicken fed to the tigers, was what I wondered silently.
We were zooming down the highway by this point, having evaded the stop and go traffic that led us back to the highway.
"I don't know, but it's name is Gracie," she said, chewing.
"Yeah, we fed it meal worms," Eleanor said.
"Grace touched the meal worms?" I asked in surprise. I knew that Grace's contribution when it came to worms, snakes or bugs in general would be minimal. When the girls were told to clean the Hissing Cockroach cage, Grace's participation was limited to trying to scare the cockroach away from the opening while Eleanor took care of the cleaning and feeding. I'm not certain what her tactic was for scaring it -- perhaps she hissed back.
"Well, I didn't exactly touch them," she hedges with a shake of her shoulders as if disgusted at the thought of touching the meal worms. "I kind of turned the can sideways and dropped some out."
"Yeah, and we were supposed to do them one at a time," Eleanor protested. "After that, the chicken wouldn't leave Grace. It just stayed with her hoping for another worm bonanza."
They both laughed, showing mouths full of bagel and cream cheese and braces.
"Yeah," she turned in the seat toward her 10-year-old brother, "the chicken kind of reminded me of Tucker."
"Hey," he protested.
"Why," I asked, "did the chicken remind you of Tucker?"
"Well," she said tilting her head to the side as if trying to find the best way to explain it, "I think it was the facial expressions."
I spent the rest of the drive pondering what sort of facial expressions the chicken could possibly have, but afraid to ask for more details. Sometimes, with teenagers, it's best not to know.
at January 15, 2007 No comments:

I realize that sports coaches probably hope to achieve different goals than I do as a mother. I want my kids to learn how to play sports and to enjoy playing sports. Coaches just want to win. Still, I wonder if I am somehow a magnet for incompetent coaches or if every coach out there is incredibly BAD!!
Ironically, we decided to let my son play in the Catholic leagues, thinking ... what that the players wouldn't be as apt to use foul language and insult each other? Thinking that the coaches would be using Christ as a role model?
Some people might have wised up last year when the football coach was talking to a group clustered around him and he suddenly beaned one of the kids in the head with the football. Luckily, it was his own kid.
This year, new coach. An old guy who has been coaching forever. Why did I think that would be better? At one point during the season, he told the boys that they were the worst team he has ever had. Perhaps it's true, but not exactly inspiring. Then he told them they sent him to the hospital with chest pains because they are so bad. When my son came to me concerned, I told him the coach was a grown up and he needed to decide how much stress he could take.
Now we're on to basketball and, so far, his team has lost every game, although one game was close. Another new coach. This one is younger with a 5-year-old as his oldest child. Apparently he doesn't like losing either. He told the boys last game that if they couldn't beat the team they were playing, they might as well cancel the rest of the season. Guess what? They didn't win.
When my son asked the coach about practice Friday night, he said there wasn't much point in practice for this team.
All of this is culminating, in a kid who actually still loves sports. And if losing and lame coaching make for character, my son is brimming with it.
at January 13, 2007 No comments: