Usually, the Tour de France begins in the heat of summer with the riders attacking the roads of France in July. This year though, the Tour was delayed until today and will run through September 20th.

Two years ago, we tried to watch a stage of the tour in Carcassonne but failed after our B&B had bedbugs. 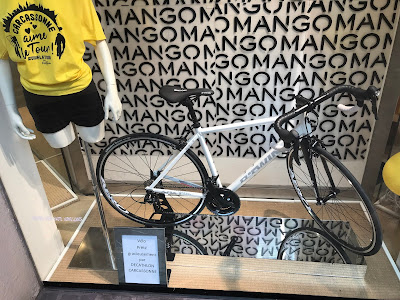 A few days later, we got to watch a stage of the Tour as it came through the mountains near our home in Quillan. 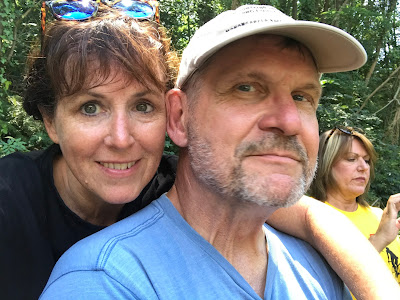 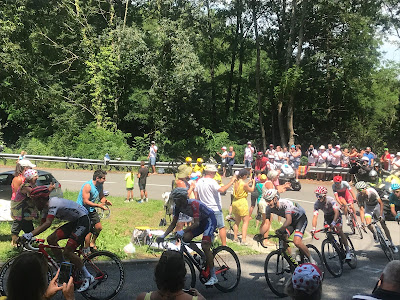 Last  year, we were in the States for the summer so we enjoyed watching the TV coverage early in the mornings and commenting on places that we had visited.

We've watched the Tour for years, enthralled by the beauty of the country that became our home. Every year we get caught up in the drama, rooting for bicyclists that we had never heard of before and suddenly we're invested in them.

Often we end up making spontaneous decisions while caught up in the Tour, like a bike trip through Provence 19 years ago. And already, as the first stage is blurring past us on the television, we hastily booked a hotel in Paris for the end of the Tour.

For years we have wanted to be standing on the Champs-Élysées watching the cyclists whiz past on the last day of the race and then to see the winner receive his yellow winner's jersey.

This seemed like the perfect opportunity. There aren't many tourists in Paris. The number of tourists in France always goes down in September, but now, with Covid-19, Americans and Asians are banned. Brits are facing a two-week quarantine when they return home so they aren't here. The crowds should definitely be smaller along the Champs-Élysées.

Also, the race is in September instead of July, so the sun shouldn't be too piercing as we stand along the road for hours.

We will have to be careful, of course, and wear a mask. But I'm picturing wandering through the Musee d'Orsay without crowds or taking an early morning run in Jardins du Luxembourg without hordes of people.

My heart rate increases just imagining walking the streets of Paris again. I love it every time. 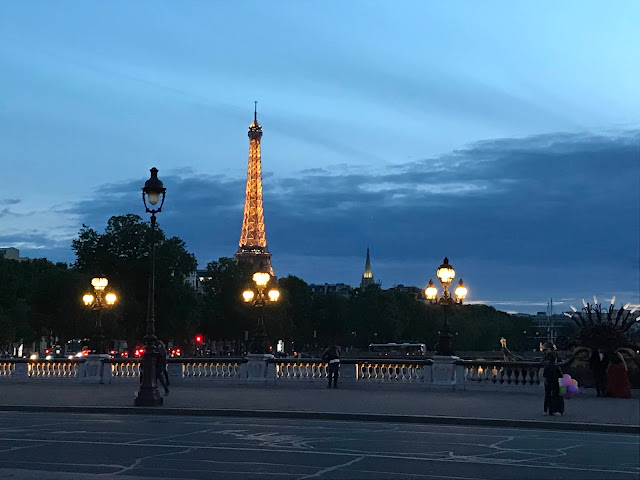 I'm happy to take you all along with me.

One of my friends from Ohio delights me with her messages.
When she sees my boys out on the street or at a soccer game, she'll take a picture and send it to me.
The most recent one was Tucker on a bike ride. He stopped for a photo and to greet Leah.
Of course, I text with my sons throughout each week and we Facetime every few weeks, but there's something thrilling about getting a glimpse of their lives while I'm so far away.
Spencer and his girlfriend Kaitlin have moved in together. Leah documented them on a walk with their Starbucks cups.

Sometimes she sees our old house and takes a picture of it. 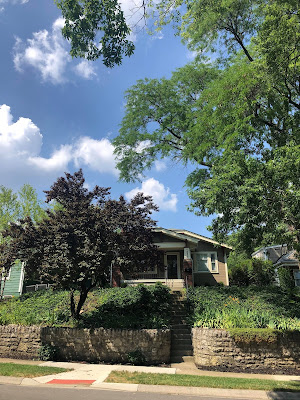 It's nice to know that you're thinking of us Leah! And we do miss our friends and family in Grandview Heights.

Before Coronavirus, Leah was likely to run into Tucker at a Columbus Crew game.


So if you see my boys in the "wilds" of Columbus, snap a picture and send it. Or, starting next month, if you spot Grace and Jack in the depths of Dublin, send it.
The hardest thing about moving to France is leaving family behind, and the pictures make it a wee bit easier.
at August 04, 2020 1 comment:

As someone who loved France enough to move here from the United States, I'm always excited to see new books about French history. And the final queen of France, Marie Antoinette, always has plenty of fodder.
I've read books by Will Bashor before and definitely enjoyed the roller coaster of books like Marie Antoinette's Head, which documented the rise of the hairdresser who created the magnificent hair styles of the queen and her entourage. Here's an excerpt from my review from February 2014:


The story is entertaining and educational. I really enjoyed seeing sketches of all the outrageous hairstyles created by Léonard and learning about the court intrigue. My favorite was the one that looked like a ship sculpted into the woman's hair.

You can see my entire review here.
And then scroll down to learn about Bashor's latest book, Marie Antoinette's World. I'm sure you'll be immersed in intrigue and shocked by what you learn.

This riveting book explores the little-known intimate life of Marie Antoinette and her milieu in a world filled with intrigue, infidelity, adultery, and sexually transmitted diseases. Will Bashor reveals the intrigue and debauchery of the Bourbon kings from Louis XIII to Louis XV, which were closely intertwined with the expansion of Versailles from a simple hunting lodge to a luxurious and intricately ordered palace. It soon became a retreat for scandalous conspiracies and rendezvous—all hidden from the public eye. When Marie Antoinette arrived, she was quickly drawn into a true viper’s nest, encouraged by her imprudent entourage. Bashor shows that her often thoughtless, fantasy-driven, and notorious antics were inevitable given her family history and the alluring influences that surrounded her. Marie Antoinette’s frivolous and flamboyant lifestyle prompted a torrent of scathing pamphlets, and Bashor scrutinizes the queen’s world to discover what was false, what was possible, and what, although shocking, was most probably true. Readers will be fascinated by this glimpse behind the decorative screens to learn the secret language of the queen’s fan and explore the dark passageways and staircases of endless intrigue at Versailles.

Will Bashor is the author of the award-winning Marie Antoinette’s Head: The Royal Hairdresser, the Queen, and the Revolution and Marie Antoinette’s Darkest Days: Prisoner No. 280 in the Conciergerie. He holds a doctorate in international studies from the American Graduate School in Paris and is professor of global issues at Franklin University. He lives in Barcelona, Spain. Visit his website, or connect with him here:

BUY the book here:
Amazon | Barnes & Noble | Publisher | IndieBound and other links available on the author’s page
***
You can enter the global giveaway here or on any other book blog participating in this tour. Visit/Follow the participating blogs on Facebook/Twitter, as listed in the entry form below, and win more entry points!

Tweeting about the giveaway everyday of the Tour will give you 5 extra entries each time! [just follow the directions on the entry-form] Global giveaway open to all 9 winners will receive a copy of this book

CLICK ON THE BANNER TO READ MORE REVIEWS AND EXCERPTS

Running Isn't the Problem; Falling Is

Thursday morning started so well. The sun is rising a little later, so I can get out while there is still color in the sky.
I'd had a good 4-mile run the day before, so I thought I'd warm up with a run on the road before trying a trail run in the direction of Ginoles.
All was going well until the tip of my foot caught a rock, and I was down on the ground before I could blink, feeling my knee, my elbow, my hands and then my head bounce on the dirt and rock trail.
I lay there for a minute stunned by the turn of events. Then, it was time to take stock.
As I sat up, I considered crying. I'm not a cry-er. I can probably count on one hand the number of times I have cried since my sister died when I was 14. I have nothing against crying; I just never seem to.
A tissue had fallen from my running belt. Its pristine whiteness clashed with the dirt on the trail. I picked it up and unfolded it, placing the clean side against my head. It came away red. Great. My head was bleeding. Next, I patted at my elbow where a deeper gash dripped.
I looked at my knee, an interchange of cuts, a secret tic tac toe game. I didn't touch it. No blood was running yet.
I picked at a few rocks on my palms.
Nothing to do but walk home, I decided.
But first, to take a selfie to share with my running friends. I know, it's a weird thing to do. I didn't even realize I had knocked off my hat.
In this picture, with my face caked with dirt, my nose definitely looks crooked. But I remember thinking as I hit the ground, thank goodness I didn't hit my nose. I've broken my nose on a running fall before. See my post here.

I walked home, down the trail and along the road. I passed 4 or 5 people who all said "Bonjour" and gave me curious looks. I didn't realize how bad I looked at the time -- my white sleeveless shirt was covered in dirt and mud. The waterbottles I carry must have squirted out when I fell, adhering the dirt to my shirt. Earl has washed it in the machine and by hand trying to get it clean.
The knee that I hadn't touched had started to drip blood down my shin, and dirt still caked my face.
When I returned home, I went straight to the shower, hoping to remove the smalls pebbles embedded in my palms, erasing the dirt from my head and nose, and gasping in surprise at the feel of the water on the cuts.
Earl doctored my open wounds with some antibiotic cream. He prodded at gray spots on my palms that could be rocks, and he gave me two ice packs, one for my knee and one for my eye.

Some people may wonder why I document my falls. Shouldn't I try to cover them up? But I do enjoy keeping track of all the pitfalls of running -- at least for me. Blogging is a good way to remember. And when I searched for the post on my broken nose, it helped me remember another fall last year  --we were in Massachusetts for the summer and I bruised my ribs on a fall. It keeps me honest.
I'm not really a runner; I'm a plodder or I wouldn't keep tripping.

I'm planning a hike with a friend in the coming week, and she gave me a stern lecture about taking care of myself before our trip.
Friday, I forced myself to rest. No walking; no running; no keeping track of my steps.
Instead, I kept ice on my knee and kept it elevated. My body felt like I'd been in a car accident. Stiff neck, sore ribs, back pain. I went to a friend's house and floated in the water, hoping it would realign me.
Saturday morning, I knew I couldn't have another day of inactivity. But I wouldn't push myself too much. Instead, Earl and I went on a bike ride. Not a long one. We stopped and had coffee before riding back home