We've been in England since Sunday, and I owe you a post about the fun and foibles we've encountered, but right now, I have to write about Hamilton.
Before we even arrived in England, I had searched for tickets to Hamilton in London, thinking maybe it wouldn't be quite as popular as it was at home in New York and Chicago. Wrong.
Grace found tickets for us for nearly $400. That was too much. We planned to enter the daily lottery to see if we could get some cheap seats, but otherwise resigned ourselves to not seeing Hamilton.
But we did have tickets to see Wicked on Thursday evening.
After a nice hike with the dogs in the snow and piercing wind, we walked the mile to the train station and prepared for our 30-minute ride to London. Some trains had been cancelled that day and people kept talking about the bad weather. I understand that it's bad for England, but the temperature was in the 20s (Fahrenheit) and not even an inch of snow had fallen, so for Ohio, this wouldn't be bad.
Still...
It got me thinking. I didn't know if Hamilton had a matinee, but I suggested that when we got off at Victoria Station, we head over to Hamilton to see if the show had a matinee that day and if any tickets were available because of cancelled trains or people who didn't want to brave the weather.

As we walked toward the marquee a little after 1 p.m., we saw some official theater people. One very jolly man stopped to explain to us how to get in line (queue) for the "returns." Returns are tickets that other people bring back to the theater and then the theater helps them sell the tickets for face value.
He sent us into the wind to wait by the security guard. There were 4 people waiting when we arrived. Apparently, the line is usually much longer.


So Earl and I joined the line; I went to fetch us coffee. When I came back, two people had already gotten in to the show, and only two people remained in front of us, maybe a mother and daughter from Sweden. Behind us was an American woman who snagged a single ticket a few minutes later. As the clock ticked to 1:45, the ticket rep came out with a young man who had two tickets that were 79.50 pounds each. "Really, very good seats," the ticket rep said.
The Swedes in front of us decided that was too pricey and Earl snatched them up for us. That was a lot of money, but much less than the prices Grace had originally found. So we paid our cash and walked into the warm theater.
What did I know about Hamilton, other than the fact that everyone wanted to see it?
Well, I'd listened to the music with Grace. I knew some of the history, of course. And I knew that the roles were played by people of color, only King George III being played by a white man.
We had a glass of wine standing in the lobby before finding our seats in the "Dress Circle" section. Perfect.
I had chills the minute the show started, and tears pooled at the edge of my eyes, splashing over.
Why? Why did this show move me so much.
The music and the actors were inspiring. I loved seeing this struggle to create our country.
Here's a line from one of the songs that made me tear up:

"Look around, look around, how lucky we are to be alive right now. History is happening..."
And here's a two-minute clip of the London show with the very same actors we saw performing.
So what made this show so emotional for me was seeing the actors, from all different cultures, portray our founding fathers and revolutionary fighters. I couldn't help but think how much stronger our own country would be if we had treated all people equally from the beginning.
The man who played George Washington really inspired me. We could have had a black George Washington  200 years ago if not for slavery and deciding that some people had more worth than others based on their skin color.
In the musical, again and again, they called Hamilton an immigrant. I imagine most people were immigrants in the late 1700s, but I got the point. Immigrants made our country stronger.
As Hamilton met the Marquis de Lafayette, along with the lesser-known revolutionaries John Laurens and Hercules Mulligan, the four of them bonded and sang a song about "The Story of Tonight," with the lyrics especially moving, "Raise your glass to the four of  us, tomorrow there'll be more of us..." And then, I pictured the students from Parkland High School, fighting like revolutionaries to be heard, fighting to stop the massacre of students in school. They started out with just a few and their cause is growing. You can find the song and lyrics on Youtube here.
Of course, the song "My Shot" inspired similar feelings as I watched the revolutionaries deciding to fight and at the end they implore, "Rise up! When you're living on your knees, you rise up. Tell you brother that he's gotta rise up. Tell you sister that she's gotta rise up"
All of it feels like it could be applied to today.
I wanted to rush back home to the States and jump into the risings that are going on now. 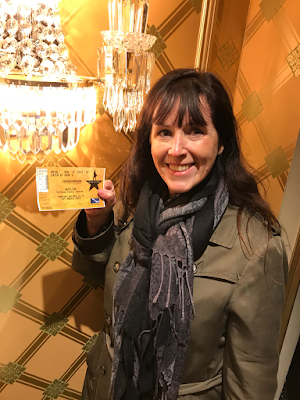 I wanted Hamilton to transport everyone of those Florida students to their audience to sing for them and inspire them. I wanted my children to watch the show and be galvanized to make a difference in the world.
If you have a chance, go to your favorite music app, or youtube and listen to some of the songs. It won't be the same as seeing the show, and no one can explain how basic and deep the feelings are that this show stirs up, but it's a start.
Drained from all the emotions of Hamilton, we stumbled out of the theater into the cold of London again. We didn't go far, just to a nearby brasserie called The Shakespeare across from Victoria Station to eat before we attended Wicked.
Poor Wicked.
It's a wonderful, inspiring musical, but it didn't stand a chance after Hamilton. I actually drifted off a few times during the song Gravity, which is the highlight at the end of the first act.
I found myself dismissively thinking about white people dancing and singing. But then I made myself listen.
At the end of the musical the words pierced me, "Because I knew you, I have been changed for good."
My day on Thursday, definitely changed me for good, and for the better, too.
at March 02, 2018 9 comments: