Within a 15-minute drive of our house weaves a path through mossy rocks and trees shrouded in greenery.  It's called the Labyrinth Vert, or Green Labyrinth.
There doesn't seem a lot there that is man made, as large boulders line the paths and trees look to be upholstered in green fabric.

We lost track of the magical sights.
We walked through the labyrinth then back, rather than making the loop after someone had told us the rest of the walk wasn't that interesting. It was just about 2 1/2 miles but we spent nearly an hour and a half meandering through the rocks and trees, stopping for photos and stories shared.

The walk from the car to the beginning of the labyrinth took us past these historical sights, including an old windmill that was used as a lookout by the Germans during World War II, along with another now decrepit building that the Germans used.
Apparently, this was a good place to watch for anyone sneaking in or out of the pass below.

The walk amongst the trees wasn't too warm and other than occasionally clambering up and down some rocks, the hike wasn't too challenging.
We ended the hike with a home picnic at our friends' house.
I don't think we'll ever be able to see all of the interesting sights near our new home in France. I wonder if that's true no matter where you live if you just take the time to go exploring.
at May 27, 2020 4 comments:

I'm feeling a pressing need to get out and show the sights to Grace and Jack since they've been housebound for nine weeks in France.
On our latest outing, they may have wished they were back in their snug bedroom.

In the morning, we took a hike with our friends Jim and Theresa. Jack didn't come along because his knee is out of commission, but Grace joined us.
We were going to hike through an old railroad tunnel that runs under a mountain.

We had some flashlights (thanks, Derrick) and the lights from our phones. At first, the tunnel had a few side exits that let in light. Then as we went farther, the dark became denser. Water dripped from the roof, splashing onto our heads or shirts.

According to my phone, we had gone about 1.5 kilometers into the tunnel, arriving at the some arches that overlooked the river, when Grace's claustrophobia kicked in. She could not go any farther!
Grace and I told the others to go on and we would walk back to the car.
So their beams of light disappeared and we were alone in the tunnel.
We started walking back toward the beginning of the tunnel. The light faded, the black closed in.
Gone were the lights of Earl and Jim bopping ahead of us as Grace, Theresa and I followed. Now, it was just the two of us.
And as we moved into the blackness, Grace made a break for it back to the arches along the tunnel, the overlooks, gulping in the fresh air.
"We'll just wait for the others to come back," I suggested. So we stood there, watching the river run far below.
After about 15 minutes, we wondered if the others might exit the tunnel on the far side and find another way to return to the car. That would leave us standing in the tunnel forever.
I tried to text Earl and unbeknownst to me, he tried to text me, but our signals were not going through. Obviously, since we were under a mountain.
As the wait stretched to 20 minutes, Grace and I decided we'd have to brave it alone. I suggested we sing a song as we walked, but we couldn't think of any songs we both knew all the words to.
Finally, I came up with the childhood song "This is the song that doesn't end..." We held hands and stepped into the darkness.
As we walked, we looked back and suddenly saw three faint lights moving toward us.
"Here they come!" Grace called.
And we waited for their return before walking out all together.
What a relief!
I can't imagine how exhausted Grace must be from the angst of claustrophobia.
We returned home to muffins and iced tea with Jim and Theresa before dragging Grace and Jack out for an afternoon adventure.
We wove up mountains and down again on a circuitous route to Gorge de Galamus.
I'd visited there before with friends (Thanks, Kris and Derrick) but we had come in from the south. They assured me the view had more impact coming from the north, which led me to the winding roads.
The problem was, that both Grace and Jack get carsick. This was not the right route for them.
But eventually, an hour later, we arrived at the stream that carved the gorge. We waded a bit then drove on to see the gorge.

We drove home from the south. The drive was a straight shot on a nicely paved road. No mountains, no twists, no turns.
Well, another lesson learned.
They both collapsed into bed when we got home, recovering from their day of French adventure.
at May 23, 2020 3 comments:

Blue Skies in the South of France

Finalement!
After nine weeks of quarantine followed by a week of rain, today dawned with a fierce blue sky and balmy temperatures.
Our daughter Grace and her husband Jack arrived three days before quarantine and we were already social distancing, so they have not seen much of France.
On Saturday, I dragged Grace along with me to pick up the chairs we purchased in Carcassonne. The rain had passed and we drove up to "La cité" which is the castle that hovers above the city.
And, of course, Jack felt like he had missed out. So today, we returned to let Jack experience the castle.
Very few people were wandering around the castle, so we got to enjoy feeling like we were back in Medieval times.

We had some ice cream and sat on a concrete step to eat it, offering bites to a mottled cat who refused both bites of raspberry sorbet and hazelnut. A little sparrow, however, gratefully accepted bits of my ice cream cone.
The shops that are open are being very careful, insisting on hand sanitizer and plastic gloves for anyone entering.
We purchased an iron bell with an Occitan cross on it that Earl installed next to our front door when we got home.
And we also bought a few castle-related gifts for our nephews. We are trying to support local businesses, even if it isn't much.
Afterward we drove down to the "modern" city of Carcassonne and walked around. We got take out from a kebab restaurant and ate it in the Square Gambetta, until Grace accidentally gave food to pigeons and we had to abandon our park bench. Not really, but we did give her a hard time about the gathering, until a little boy on a scooter zoomed by, scattering the pigeons.
We have discovered that the simplest outings are exhausting these days.
I think it's going to take some time to get used to going out again.
at May 18, 2020 4 comments:

On Monday, the lockdown in France eased.
We were allowed to go out without an attestation, a paper that said where and why we were going somewhere. The reasons were limited -- fulfilling essential needs, like medical or grocery, exercising within 1 kilometer of our home, or helping others who couldn't go out.
We weren't even allowed to go to the grocery with other family members. Only one person per car.
As of Monday, we are allowed to travel, no papers required, within 100 kilometers of our home. That's quite a bit for us. It includes Carcassonne, Toulouse, the Mediterranean -- but the beaches are still closed.
Andorra and Spain are also in are 100 kilometer area, but the borders are still closed to both of those places.
We were so excited to venture out of our house and to take Grace and Jack to see some of the beautiful places near us.
Remember that they arrived on Friday before the lockdown happened on Tuesday. Since then, they've been sheltering in our house, taking occasional walks and stopping at the bakery sometimes.
We debated going to an old medieval town and showing them the market. It's about an hour away.
But the weather forecast had other plans.
The forecast has been rain for the entire week.
Monday afternoon, we went about 10 kilometers away to Rennes le Chateau. As you can see from the picture, the weather was ominous.

Rennes le Chateau is one of those mysterious places that has to do with a priest and sudden influxes of money that allowed him to build this tower among other beautiful structures.
Our next day out was planned for Wednesday. Earl and I needed to pick up our visas. In France, they're called carte de  séjour or titre de  séjour. They give us permission to stay in the country for another year.
We had our appointment on February 25th and received a text that the cards were ready on the Friday before lockdown. Obviously, we hadn't been able to retrieve them.
Strategically planning when to arrive and how to avoid long lines, Earl and I drove to Carcassonne. Grace and Jack decided not to come along because rain was once again forecast for the entire day.
The map on our phones took us right through Carcassonne rather than around it because traffic was so light. We found a parking spot a block away from the prefecture. We waited maybe 5 minutes for the security guard to allow us in. Another 5 minutes and our cards were in our hands. By 8:59 a.m., we were back in the car.
But wait! I paid for parking until 10 a.m., I wanted to protest.
In years past, we would go with friends and celebrate our new visas with breakfast in an outdoor cafe. This year, no restaurants or bars are open.
Instead we visited a home improvement store for paint and a used furniture store where we found chairs for our kitchen table.

Throughout the quarantine, this is how our living room has looked. Metal supports on the ceiling and along the walls.

Our builder friend Kris put up the boards a week before quarantine ended. How did we convince him? We had a new kitten arriving and couldn't allow it to hide inside unfinished walls. 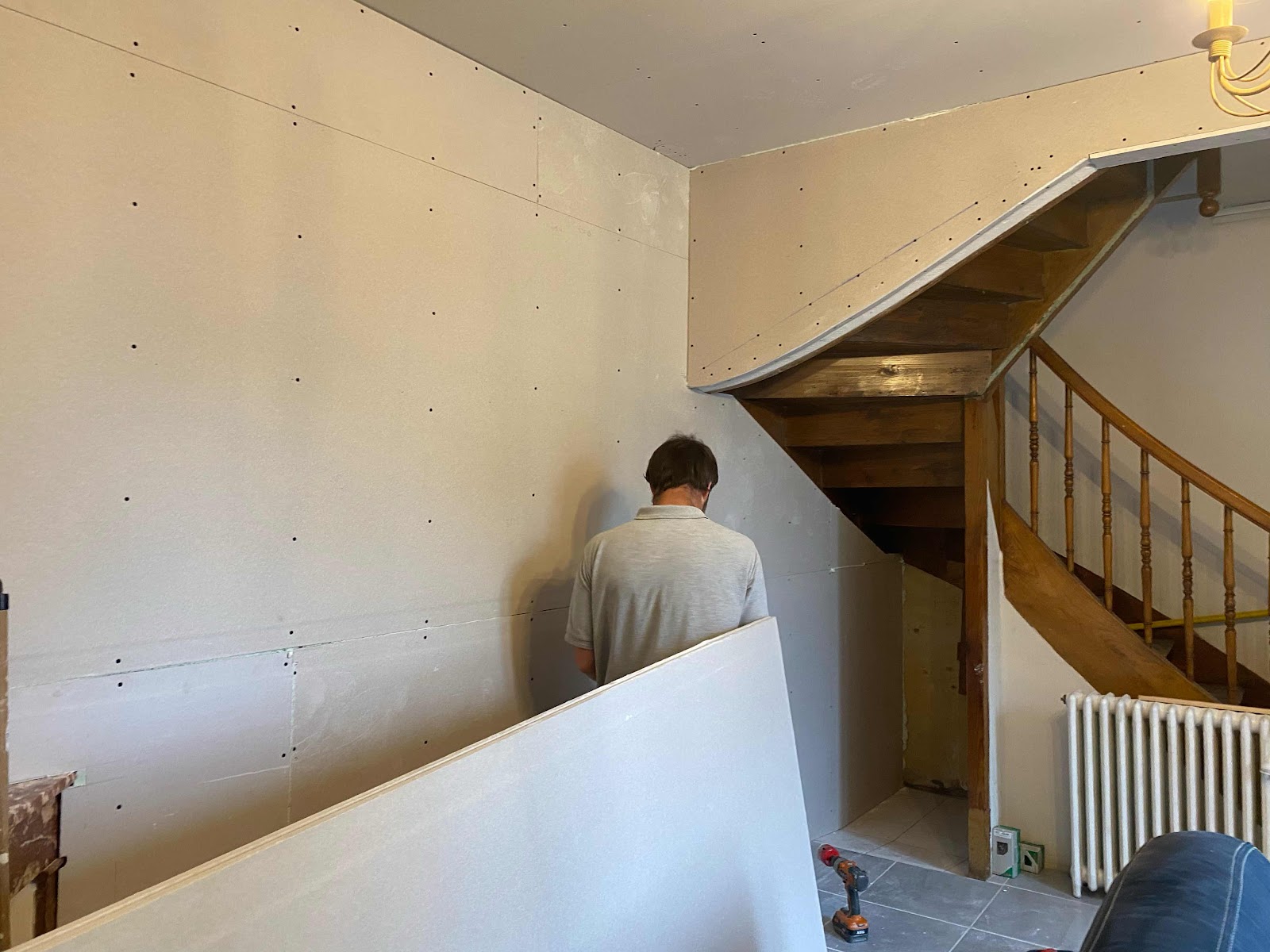 Now the walls and ceilings are complete and we are waiting a week for them all to dry, because everything is humid as we apparently are going through a rainy season. Soon we'll be able to do a few mist coats and then to paint.

A week ago today, we picked up our new kitten, Louis Catorze -- that's a play on the name Louis Quatorze, the 14th. The Sun King. 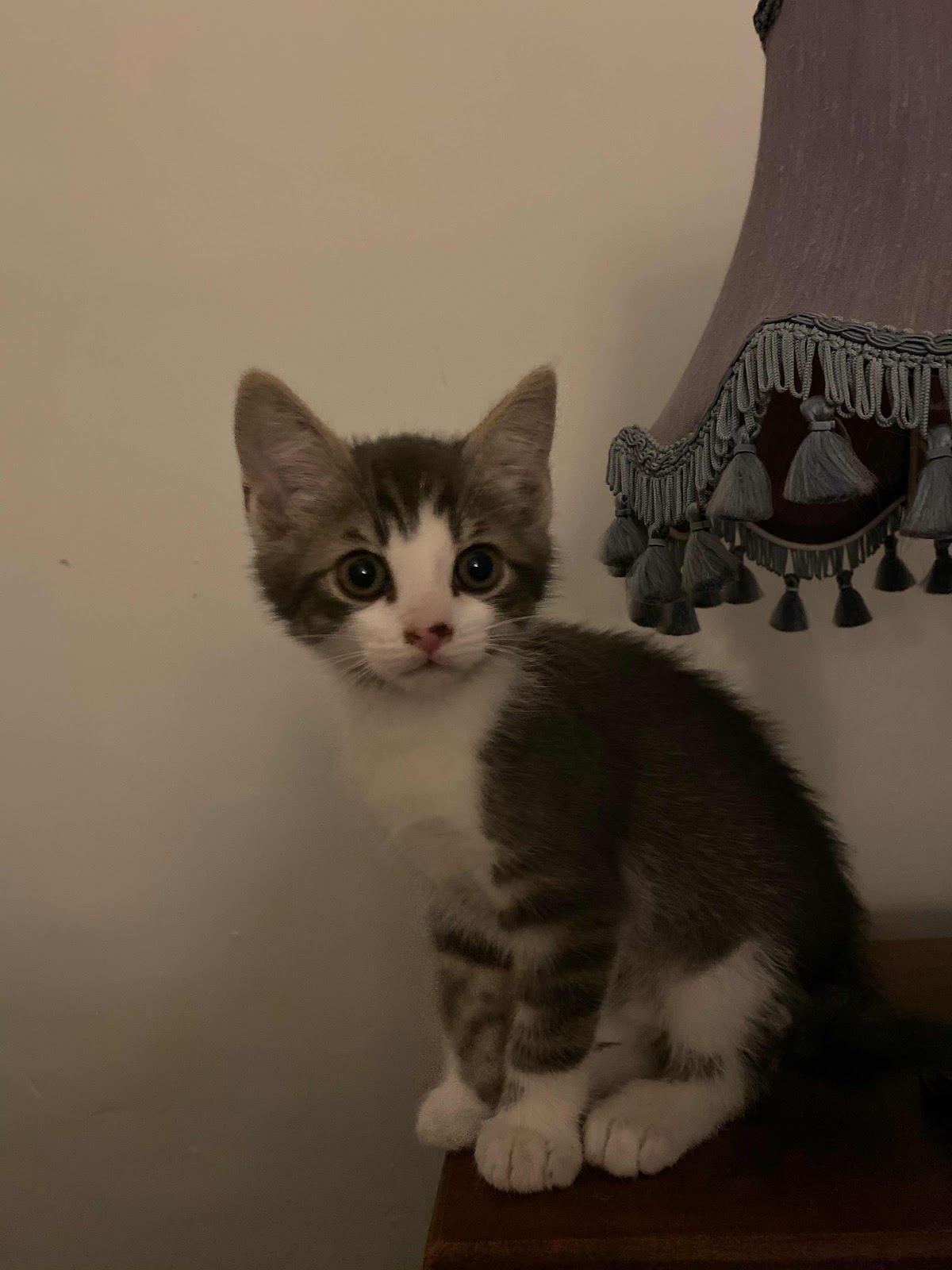 Louis is an upstairs cat right now as we work on the downstairs, but he's mostly fine with that because the stairs are a challenge to him.
The rain is scheduled to dry up next week, so we're hoping for some adventures then.
Meanwhile, our market has still been happening every Wednesday and Saturday with fruits, vegetables, cheese, honey and plants, so we get to walk around and make eye contact over our masks. And I heard even the coffee truck has returned, so I'm super excited to see all the vendors that arrive Saturday morning.