Yes, we made it to the Tour de France and it was everything I hoped it would be.
Earl and I rode with our friend Jules, following a British couple, Steve and Lou, who live here in Quillan to Pamiers, France, where we walked along the route a few kilometers toward the summit.
Steve scouted the route and found a bank at the edge of a hairpin turn that allowed us to see the riders as they approached, turned and then rode on up toward the summit at the Col de Pamier.
The caravan is a parade that comes through, filled with advertisers. They throw out strange and wonderful things. Jules collected a hat of every color.
I got a polka dot one, which is the symbol of the mountain rider, known as the King of the Mountains. 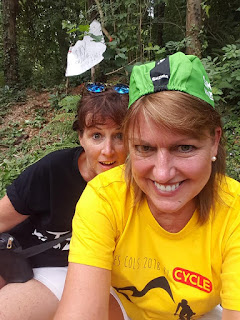 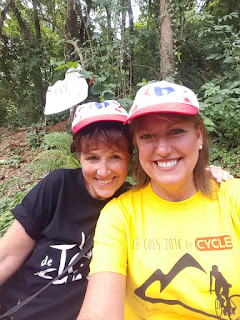 People cheered, music played, packages of small sausages were pelted at passersby, and there was even a chicken float that was kind of freaky. Luckily, they didn't throw chickens, but coupons for chicken, along with refrigerator magnets. 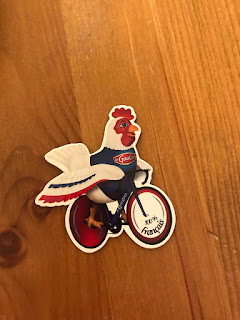 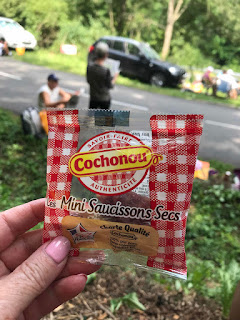 They also threw little packages of sausage, along with Haribou candy and Madeleines, that famous French cookie.

Once the caravan had passed, we settled back on the bank of the road and ate our picnic lunch until the riders arrived, about 1:30 p.m.
We had no idea that up the road, there had been a protest by farmers. The police used tear gas to disperse the protesters and some of the Tour de France riders got tear gassed too. The race was halted while everyone was treated.
But all we knew was that the riders were on their way when we heard the helicopters overhead.
We saw the first group of riders, the breakaway, whizz around the curve and make their way on up the hill.

A minute later, the peloton, the main group of riders sped past too.

I took a few pictures, then put my phone in my pocket and watched the riders as they went. I wanted to see the event rather than live it through my phone.
The yellow jersey, the man in the lead of the race, rode by and I cheered for him. Geraint Thomas for Team Sky has been ahead for much of the race and it looks like he'll win when the Tour finishes on Sunday.
After the riders had finished, I saw one lone rider in the back near the team cars that follow with extra bikes and mechanics. I recognized his bright blue uniform and turned to Steve, our biking expert. "Is that Marcel Kittel?" I asked. Kittel is a German sprinter and the sprinters don't do so well on the mountain stage. Steve agreed that it probably was Kittel, and I felt a bit like an expert myself that I had recognized him.
Afterward, we walked back down the road to our parked car.
People with data were able to post pictures of the race on Facebook and explain our excitement at being there. One of the most common comments received was that it is "over so quickly," implying the race wasn't worth attending.
That comment kind of made me bristle. That's true for everything that's enjoyable.
Think of the preparation for Christmas day and then the day goes by in a flash. Months of preparation for a wedding and in a few hours it's all a memory.
I wouldn't skip going to watch the Tour de France because it goes by so quickly. After all, who wants to watch a race that goes by slowly. That's not exactly a race, is it?
I loved being there and would have gladly made the trek up to Paris to see the end of the race on Sunday, but the cost of trains and planes this time of year is a bit steep.
Just waiting, I had goosebumps and seeing the riders themselves thrilled me.
You can bet that I'll be back on a mountainside next year cheering on the Tour de France.
at July 28, 2018

I watch the Tour de France mainly for the scenery! I know this is strange but I do not get so many documentaries etc here on our channels and this tour always give me fabulous scenes right through France and the ones in Paris are spectacular.
I like the cycling too btw!

Lee, Yes, my feelings exactly.
Mystica, That's why we started watching too - just our love at seeing French scenery.

I am surprised the crowds weren't thicker on the col. Everybody wants to see the riders climb. I was on a flat bit, and right on the curb. They went by so fast and so close it was startling.
It looks like you had an ideal spot--shady and on an incline so you could see past the people in front of you.
To Mystica: Check out Des Racines et Des Ailes (roots and wings), a show on France 3 TV. You can see videos online. All about scenery and patrimoine.

You look so happy, to me that's everything!

Sounds just as fun and exciting as I envision it would be. So happy that is true. Loved the part where you put down the phone and enjoy it in real time .