The Male Perspective on Prom

The funny thing was at 4 p.m., when Grace's friend Deidre showed up to have her makeup done, Spencer hadn't even showered yet. He was chilling with some friends. Deidre's nails and hair had been done. Glitter spritzed her face and the poofy part of her hair. Grace gave her smokey eyes before taking her home so she didn't muss her prom preparedness. 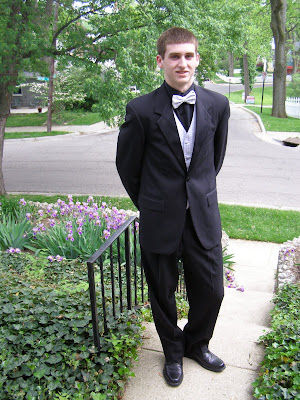 Spencer hopped in the shower at 5. His tux was hanging on the closet door. The orchid corsage for his date was in refrigerator. The prom tickets were in his wallet.
I took a few pictures of him alone before he left, but couldn't get a genuine smile out of him.
The minute he got to his date, he relaxed, as if the anticipation was much worse than the actual experience. 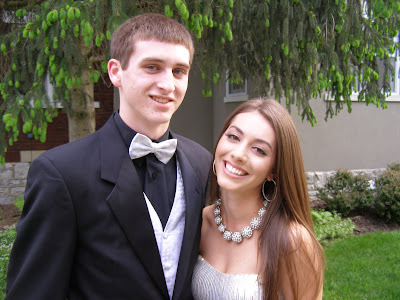 When Grace went to prom, we had the advantage that her date came here so we could get some photos of the two of them together. Earl and I skulked over to Claudia's house, hoping to snag some photos of the two of them before the big crowd arrived. Too late. 12 couples and most of their parents came to take pictures.
Here's a picture of the whole group so you can see how diverse the girls' dresses were. 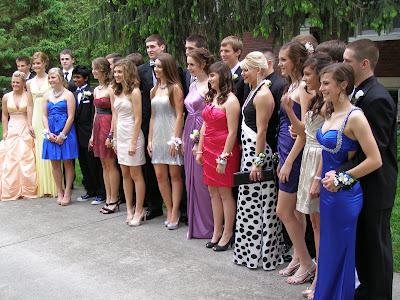 That's Spencer in the center towering over everyone else and his date slightly to the right of him in the photo.
Here's my favorite picture of Spencer and his date Claudia. 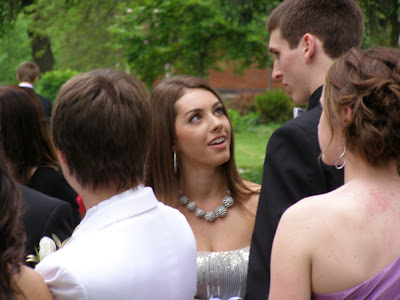 All 24 kids paid $17 each to ride on this "Party Bus." It took them to dinner then to the prom at Franklin Park Conservatory. 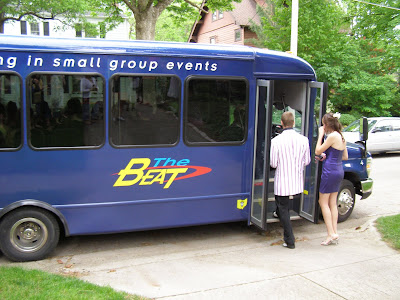 We didn't hear from the kids again until AfterProm where Earl and I were chaperoning. Spencer and friends played basketball while the girls sat in groups talking. Baskets overflowed with food -- Chipotle, pizza, fruit, chips, baked goods. I stayed until 2 and Earl closed down the place at 3:30 when all the kids were shipped home.
at May 15, 2011

they all look great!

They all look fabulous .. love the girls dresses :-)

What a Handsome couple!

Love the group bus idea and all of the dresses.

I passed a couple who were either on their way to dinner or leaving dinner in German Villiage and the young man's car's had broken down right in the middle of the road.

I also learned this week that the dress shops around the state keep record of who buys what dress and what prom they are going to, in an effort to prevent the "arriving in the same dress" issue.

Thank you for sharing

What a fun time, and great photos. When I saw your son's date's hair, I immediately flashed back to my own prom in the early 1970s as that was the hair style then..LOL

Thanks for the comments, guys.
Diane, Claudia was the only one of the girls who didn't have her hair teased and curled into some sort of updo. She'll probably start a new trend. She does look great