My nephew Michael was the first grandchild on both sides of the family. He was feted and corrected by more grandparents and aunts and uncles than he could count. Now he's almost 24 and has been in the Navy for nearly 5 years.
He served on a nuclear sub, which sounds dangerous, but keeps him away from road bombs. This year he decided to accept land duty in Afghanistan. He's in Texas training for what he's calling Afghan Deployment 2011.
I long for the days when a mischievous Michael tried hard to stay out of trouble.
At our house in Florida when little Michael visited, the lights suddenly dimmed and went out. I found a pair of tweezers stuck into the outlet on my makeup mirror. That tripped the breaker. We examined Michael's hand to make sure he hadn't burned himself. 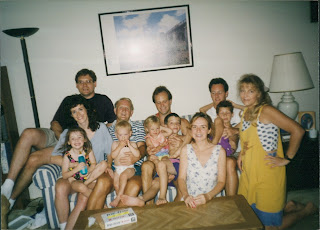 Here's the whole gang except for the two youngest, including Tucker. Michael is on the right with his eyes closed.

Every time he visited us in Florida, he seemed to get bronchitis. One day, while eating Entenmann's chocolate donuts, he started to cough and threw up all over my favorite sweatshirt. As we were cleaning him up, he asked, "Can I have the rest of my donut now?"
My favorite Michael story is from when we were visiting my parents' blueberry farm in Kentucky. Michael must have been two years old and he had a little plastic tennis racket. Earl, who I was dating at the time, was in charge of Michael as he leaned over a little waterfall, running the racket under it again and again, as two years old will.
In a fraction of a second, Michael fell head first into the cold creek.
Earl says he still remembers the quiet of the countryside that second that Michael was face down in the water. Then Earl lifted him out feet first and his wails filled the air.
When Michael was 19, he joined the Navy. He rarely makes it home as he figures out what his adult life will look like, but he got home this spring and luckily, his flight came through Columbus. The boys went with me to the airport to see Michael off. We won't see him again until after his tour in Afghanistan. 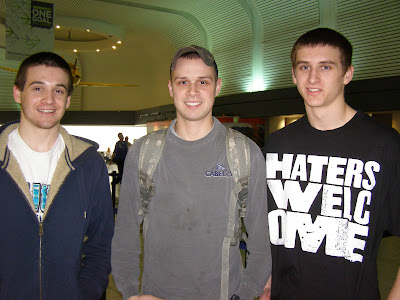 My boys have grown in size to catch Michael, but they have years to go before they're ready to make decisions similar to Michael's.
When your kids, or even nephews, are making life-changing decisions as grown ups, all you can do is watch and hope for the best.
Thanks for your service, Michael, and come home safely.
at May 26, 2011

I hope that war is over soon. What a mess it is. I hope your nephew will make it back safely too.

Yes make it home safe Michael! Paulita you and your family have a great weekend. HOpe you get that massage you want!

I always feel like watching my neices and nephews grow up is dress rehersal for my kids. Michael is brave and courageous. He deserves your love and fond memories. They will sustain him.