I'm not prepared for my class tonight, but I wanted to try to keep up my streak of blogging everyday in May, except for the one day that Blogger was down.
Yesterday we took the cats to the vet. The younger one, who is usually more sociable, hid behind Grace and tried to climb in her purse.
The older one just hung out on the counter wondering what the big deal was. They both received shots, but the younger one, Tybs, got a 3-year rabies and distemper shot. 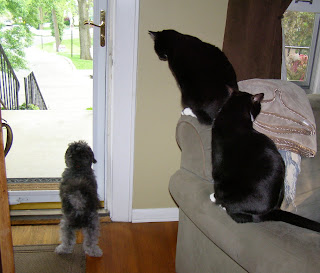 The cats kept their distance, but a close eye on my brother's dog when he came to visit.

In the evening, Tybs couldn't settle down. He threw up three times. He moved meowing from room to room. His back leg thumped like a bunny's as if he couldn't control it. His breathing grew rapid and shallow. He refused to be held or petted. I tried to call the office and it referred me to an emergency pet clinic. The vet tech on duty suggested that if he kept throwing up, he should be seen. He hid for awhile in Spencer's closet until Grace found him and took him out.
Her fear: Cats go to be alone if they are going to die.
She looked up his symptoms online and read that vaccines could lead to seizures and death.
Things settled down and everyone went to bed before Earl got home from work, until 2 a.m. when Spencer came to the living room complaining that Tybs was standing at his closet door meowing to be let in.
I picked him up and carried him upstairs. He hissed and clawed at me. I wondered if the distempter vaccine had given him a temper. I finally let him down and decided we should let him go in the closet. 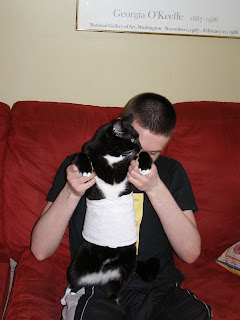 The whole family, except for Tucker who slept through it, stood in Spencer's room, watching the now violent cat disappear into the darkness of the closet.
The older cat followed him and everyone went back to bed.

Here's Tybs in calmer times being tortured, I mean dressed up, by Tucker with the cut off sleeves from a t shirt.

This morning, I woke to Tybs lying beside me, his back leg thumping against my ribs.
His breathing was normal, although he has slept a lot today. Looks like he's getting better.
I called the vet this morning and they decided giving him both vaccines on the same day may not have been a good idea. I could have told them that.
at May 25, 2011

Poor cat. They are like babies-can't tell you what's wrong.

Is your cat still doing okay? Mine just got a rabies vaccine tonight and has the exact same symptons except no vomiting and it's really scaring me. She also has been having allergy issues (pulling her hair out) for months and it's worse tonight she can't stop licking. Hope your baby is doing better.