A few weeks ago I wrote about the book Her Beautiful Symmetry. I was in the middle of the book, loving the writing, but dreading that I might end up hating the book the way my best friend did. 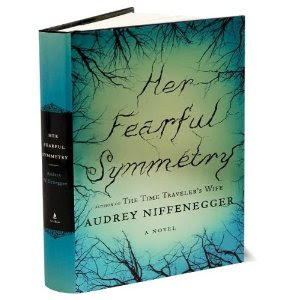 I finished it and definitely count it as a book worth reading, but before you go on, I have to warn you that I reveal the secrets of the book in this blog post. If you plan to read the book, don't keep reading my blog post. Also, another warning that when I told this story to two co-workers yesterday, one of them snorted water out of her nose. So don't say you haven't been forewarned.
Her Fearful Symmetry was written by Audrey Niffenegger, author of The Time Traveler's Wife. Everyone loved The Time Traveler's Wife. The story idea was unique; the writing exquisite. Such a distinctive book probably put pressure on Niffenegger to come up with an equally unusual next book. That's why the author wrote a book about an aunt leaving her London apartment to twin nieces after she died. When the nieces move into the apartment, they discover that the aunt's ghost lives in the apartment too. Okay, it gets more preposterous.
The aunt ghost discovers she can remove the soul from a living cat and then put it back in. That makes the cat die then come back to life. One of the twins decides she wants to fake her own death so she can escape her controlling twin sister. Why does no one talk the confused 21 year old out of this? Why doesn't someone tell her to get a backbone and stand up to her twin? I'm not sure.
The dead aunt and the boyfriend, who lives downstairs, make a plan to remove the twin's soul and put the body on ice until it is buried in the mausoleum. Then they'll get the body out and replace the twin's soul so she comes back to life and can live free of her sister.
You'll be surprised to learn that this plan did not work out the way the twin hoped, but was the aunt scheming the outcome all along? She claimed she couldn't get the twin's soul to go back into the body, so the aunt entered the body instead.
The dead twin haunts the aunt's old apartment, stuck with the living twin, because apparently dead souls are confined to the place they lived. How ironic, right? The dead twin literally can't escape her overbearing twin. Okay, in spite of all the crazy things that I've told you about this book, the most unbelievable thing is yet to come. The dead twin figures out how to escape the apartment and asks her living twin to help her. The dead twin's soul, and the dead cat's soul, have to go in the mouth of the living twin who then has to run outside and release them.
And that was the moment that seemed most ludicrous, of all the bizarre things in the book. That living twin racing downstairs and outside then opening her mouth to release the soul of her sister and the kitten so they could roam the world.
As for the dead aunt inhabiting the body of her niece, she and the boyfriend move out of London and have a baby boy. At the end, the boyfriend leaves the ressurected girlfriend and the baby behind. That also rang a bit unbelievable, since the boyfriend seemed like a decent guy for someone will to aid and abet the soul removal and body on ice of a 21-year-old. Plus he knew the mother of his baby was evil. She took her niece's body.
The fact that her niece was actually her daughter, well that's another plot twist and you'll just have to pick up the book yourself.
I think Audrey Niffenegger could write about life in a brown paper bag and make it beautiful. I hope her next novel tackles something less preposterous. The human condition is already unbelievable, Ms. Niffenegger. Explore it, explain it with your lovely palette of words.
at May 27, 2011

OK that plot is ridiculous, and really doesn't make me want to read the book!

I did hate this book although I loved the writing. The only redeeming thing about it for me wars the plot line between the OCD upstairs neighbor and the overbearing twin. CraZy book but a great description

I think I'll give it a pass but I like the beginning concept.