The Cat's Tail is on Fire!

Even as he stood in the kitchen with a dish towel in hand, my husband had to know that this story could not avoid the blog.
I had allowed the younger cat, Tybalt, to go outside a few minutes before. He stays on the sidewalk and rolls onto his back the minute he feels the sunshine, unlike the older cat who always makes a break for it. I let Tybalt enjoy the warm day and the outside smells for a few minutes until I carried him back inside. 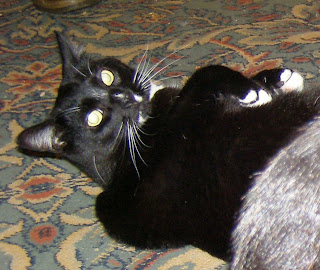 I returned to my computer and Earl decided to heat some water for tea.
That's when I heard him speaking in warning tones to the cat.
"Tybalt. Is that feeling a little warm?"
I went back to the kitchen and saw that the cat was sitting on the counter staring out the back door. His tail swished back and forth, close to the gas stove burner that Earl had lit to warm his tea water.
The cats, of course, are not allowed on the kitchen counters. We have a spray bottle of water to use that convinces them to jump down. I have even put pieces of tape, sticky side up, along the counter to dissuade them from using the kitchen counters as a short cut.
I searched for the spray bottle to get Tybalt off the counter.
"Let him learn his lesson," Earl said.
With another flick of Tybalt's tail, the end flamed yellow.
I could picture him making a run for it, his tail lighting couches and curtains on fire. The house would burn to the ground because my husband thought a cat, with a 3-second memory, could learn his lesson by catching his tail on fire.
As Earl described it later, it was just like a cartoon where the fuse is lit.
The cat's black tail flamed, Earl smacked the fire with the dish towel, and all that remained was the sickening smell of burnt hair.
Tybalt is okay. He sat on my lap later licking the burnt tail hair. Earl assures me that the skin underneath never burned, just the hair, and that the cat is not hurt.
I just hope he learned his lesson. Not the cat, my husband. Anything that blatantly obvious will land him on the blog.
at May 09, 2011

I still can't believe he let my baby set himself on fire.