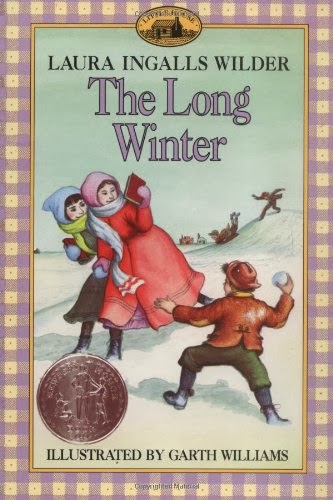 If I were an elementary school teacher, I would definitely have a time period each afternoon where the kids put their heads down on their desks and listened to me read to them from Laura Ingalls Wilder's The Long Winter. Did your teachers ever do that? I have such a warm feeling inside when I remember a teacher taking the time to read aloud to us each day.
The book, The Long Winter, is so apropos for this year. It tells the story of Laura and her family on the Dakota frontier during a series of blizzards as food and fuel ran short.
Here in Ohio, we've had more snow fall that stayed on the ground, beginning in November than ever before.
We've had the coldest weather I can remember, with temperatures dipping down to -17 degrees, and that a straight thermometer reading, not counting the wind chill.
On Tuesday night through Wednesday morning, we had a big snow. Even with our increased snowfall, we usually stop after three inches or so. The other night, the snowfall must have been six to eight inches with a nice crust of ice on top. 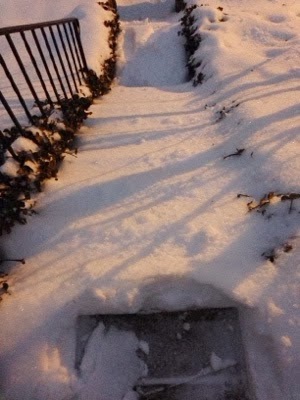 I went out to shovel the snow, since my classes were cancelled and Earl still had to go to work. The snow was deep enough along the front steps that it looked like a giant ski jump rather than a set of stairs.
Underneath the ice, the snow was heavy and wet. So perfect for a snowball fight or building a snow fort or snowman. But I had no one to play with in the snow. The temperature was pretty perfect too, about 28 degrees. I had on layers, but didn't wear a winter coat. By the time I finished, my thick sweater and knit cap were wet from the snow that continued to drift down.
I cleared our sidewalk and the neighbors on either side.
Then I went over to another neighbors house; she's in her late 70s and I knew she'd be out to try to shovel. The heavy wet snow was not anything she should tackle.
As I shoveled my way up to her door, I saw another woman trying to clear out her driveway where the snow plows had pushed the snow from the road. The snow pile was up to my waist. We worked on that for awhile until she was able to get her car through.
I had one more neighbor to help before I  could abandon my shovel.
Earl walked past on his way to wait for the bus. Since the county had declared a Level Two snow emergency, the bus would be free.
He waited for nearly an hour before he came home for the car and gave a ride to several of his companions waiting for the bus.
Our little city does pretty well at clearing the roads, and good thing because today the temperature plummeted down into single digits and it's supposed to be even colder.
at February 06, 2014

Shoveling snow is fun but by February it can get old, especially with a winter like you guys are having.

You went above and beyond the call of duty for which I have no doubt that your neighbors appreciated.

Not a good winter to have a drive way.

What a great neighbor your are!. I hate shoveling snow....

I loved all the Laura Ingalls Wilder books. I grew up in South Dakota and did have a teacher that read to us every day. She introduced me to the Little House books. I should re read them sometime.

sounds heavenly right now to put my head down and hear you read me a story! I didn't mind shovelling the other day, it was good exercise for me! More snow on the way to night and Sunday. I really have had enough! How about you! :)

I love Laura Ingalls Wilder. My mother read the Little House books to me & I read them to my daughter. Both times bring back happy memories.