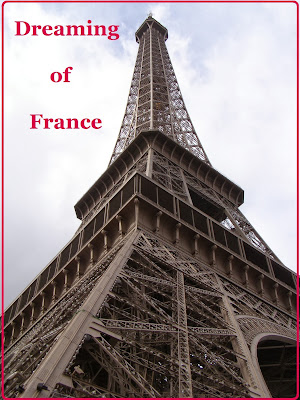 Please join this weekly meme. Grab a copy of the photo above and link back to An Accidental Blog. Share with the rest of us your passion for France. Did you read a good book set in France? See a movie? Take a photo in France? Have an adventure? Eat a fabulous meal or even just a pastry? Or if you're in France now, go ahead and lord it over the rest of us. We can take it.
Sunday was my birthday, but since I'm still feeling strung out by the flu, I decided to watch a French movie, Amours & Turbulences, (Love is in the Air). The movie, starring Ludivine Sagnier as Julie and Nicolas Bedos as Antoine, begins in New  York as both prepare to catch a plane to Paris. As fate would have it, the ex-lovers are seated next to each other on the flight. 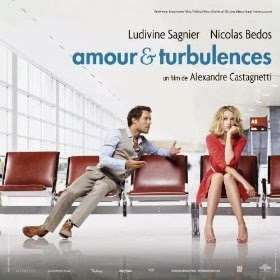 I was afraid the entire film would take place on the plane and we'd miss the ambiance of Paris, but as the two remember their relationship and their break up, plenty of Paris scenery fills the screen.
As the board the plane, three years after their breakup, Antoine is a player who can't get it up after two weeks with a woman. Julie is a sculptor and takes herself very seriously. Julie is going back to Paris for her wedding in a few days.
This movie, with English subtitles, was lighter than most French movies are. At my house, we joke that a French comedy only has two or three people die. They are usually very dark. This one is more American-style romantic comedy, which I enjoyed. It wasn't black and white, though, like many American movies are. There were definitely nuances.
When Julie meets Antoine at a party and ends up sharing a cab with him so he can escape another woman, they have their first date on the lower observation deck of the Eiffel Tower. As they drink champagne and dance, Antoine counts down then they both look up and see the Eiffel Tower sparkling above them.
Julie calls Antoine corny for taking dates to the Eiffel Tower or traditional French restaurants where tourists go, but as a tourist, it's fun to travel to these places with the couple.
This was a charming way to spend a Sunday afternoon. I highly recommend it.

Another film to put on my list. It sounds delightful.

Oh it's sounds divine, exactly the sort of film we all need sometimes. Parfait. I'll watch out for it here, I hadn't heard of it before.

BTW I got my link title wrong it's not brides of Paris again.

If the movie is on DVD I'll watch for it. We would never find a foreign language film at any theater in wild, woolly Wyoming!! :)

Sounds like a movie I would watch. Wonder where I can find it?

As Louise said, parfait! I rediscovered Mr. Morgan's Last Love - that Michael Caine film set in Paris - is now titled Last Love and it's on Amazon. I'll look for Amours & Turbulences there too:)

Sounds interesting! I am now in a French film club. Maybe this is one we might want to see. Thanks for the review.

Paulita, So sorry I submitted mine twice. For some reason the first one did not link to the post. Maybe you can delete #5 , I could not figure out how to do it.

Sally,
I can't delete #5, but people can visit your hearts post and enjoy that if they missed it!
I watched the movie On Demand on WOW. I'm sure that it's available on demand through most cable systems or on Amazon.

This looks like an awfully good one! I think I'd enjoy it lots -- thanks for the recommendation!

I think I would love to see this movie!