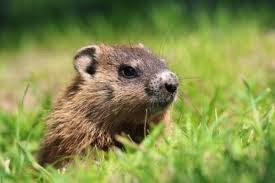 Sunday was Groundhog Day here in the United States. I guess it is no coincidence that it falls half way between Winter Solstice and Spring Equinox. I didn't even realize that until some of my British blogging friends in France pointed out that it was Candlemas, the halfway mark. Then I realized why Feb. 2 was Groundhog Day.
Of course, Groundhog Day was made famous by the Bill Murray movie Groundhog Day.
The folklore about Groundhog Day is that the groundhog climbs from the hole where he hibernates to check out the weather. If he sees his shadow, he gets scared and goes back into his burrow for six more weeks of winter. If he doesn't see his shadow, then he doesn't retreat and that is a sign of an early spring.
What bugs me, is that the people in Pennsylvania have named their groundhog, Punxsutawney Phil, as the official weather predictor. He saw his shadow because, apparently, Pennsylvania had a sunny day on Feb. 2. So Pennsylvania is going to get six more weeks of winter.
But I say that Pennsylvania is a different area of the country and Punxsutawney Phil does not speak for the rest of us!
Yes, Pennsylvania is just east of us, but, here in Ohio, we had rain all day. No groundhogs saw their shadows in Columbus. I am counting on an early spring.
I am begging for an early spring.
As I type this, I'm watching the weather forecast for ice accumulation starting tomorrow followed by several inches of snow by Wednesday morning.
Come on groundhog!
at February 03, 2014

And here in California the poor groundhog never got to sleep because it's sunny and warm year-round :). Thanks for stopping by pret-a-vivre.com and for the party.
Have a great week!

Lol. Happy groundhog day. It is freezing here as well.

We haven't had any winter to speak of here in Paris. It's been raining but in the 40's or even 50's. Winter isn't over, though. Love that movie.

So agree with you! We have Wiarton Willy as our National ground hog. He predicted 6 more weeks as well. I say in 6 weeks it will be spring and this crappy weather will leave. That's what Lucy Christie says!!! Especially when I notice that it's still light out at 5:35 p.m. I'm very optimistic as for the snow tonight or tomorrow, just a little hiccup in my plan!

Ha! You are so funny. We got a snow storm Sunday night and schools were closed again Monday. I say that as if lends credibility to my whining about the weather but actually our superintendent must not like winter. He or she announces school closings when the storm is announced.

People around here rush to the grocery store when a storm is coming, and buy up everything in sight.

I don't know how many people asked me today .. "is it always this crazy when a storm is coming?"

Cheers to only 6 more weeks of winter.