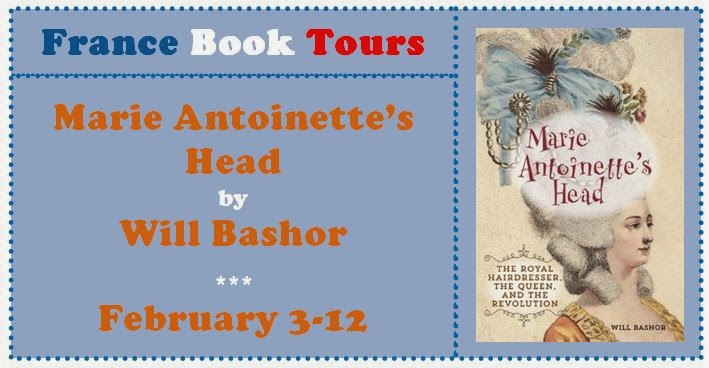 I received this ebook version of the book in return for a fair review.
Who knew that Marie Antoinette's hairdresser played a crucial role in her life? 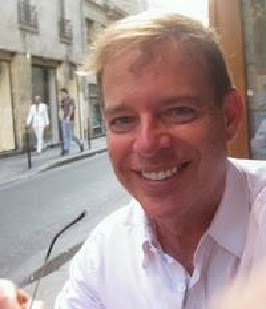 Author Will Bashor did apparently because he has written a well-researched, thorough book on the life of Léonard, who arrived in Paris from Gascon as a rudimentary hairdresser sure that he was meant for
greatness. If this was fiction, an editor would argue that Léonard catapulted to success too easily. Surely in fiction we would have to make our characters struggle a little harder, but apparently creating outrageous hairstyles on actresses brought Léonard to the attention of the aristocracy. In just a few short steps, he was the hairdresser to the new dauphine, Marie Antoinette. 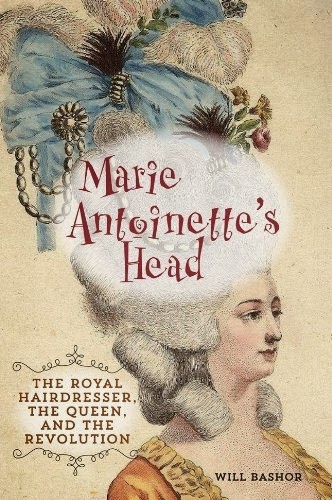 I'll have to say that the initial pages of information in this book had me a little worried. The cast of historical characters was sooooo long. And, since I'm not a French Revolution buff, the characters did get confusing at some parts. I think my daughter, who reads a lot of historical fiction, would have had an easier time keeping all of the people straight.
The story is entertaining and educational. I really enjoyed seeing sketches of
all the outrageous hairstyles created by Léonard and learning about the court intrigue. My favorite was the one that looked like a ship sculpted into the woman's hair.


The coiffure a la Belle-Poule consisted of a ship sailing on a sea of thick, wavy hair. It was invented after the naval battle in which the frigate La Belle Poule was victorious. The ship itself, with its masts, rigging, and guns, was imitated in miniature in the pouf.

Here's a picture from wikimedia that shows an example: 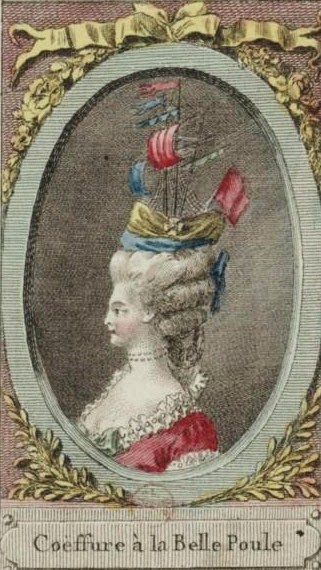 As I read this book, I found it hard to believe that a mere hairdresser could play such an important role for a queen, but the carefully documented sources definitely support Bashor's story. There were times when the story moved slowly, but overall it was entertaining and informative.
Synopsis by the Author

Marie Antoinette has remained atop the popular cultural landscape for centuries for the daring in style and fashion that she brought to 18th century France. For the better part of the queen’s reign, one man was entrusted with the sole responsibility of ensuring that her coiffure was at its most ostentatious best. Who was this minister of fashion who wielded such tremendous influence over the queen’s affairs? MarieAntoinette’s Head: The Royal Hairdresser, The Queen, and the Revolution charts the rise of Leonard Autié from humble origins as a country barber in the south of France to the inventor of the Pouf and premier hairdresser to Queen Marie-Antoinette.
By unearthing a variety of sources from the 18th and 19th centuries, including memoirs (including Léonard’s own), court documents, and archived periodicals the author, Professor Will Bashor, tells Autié’s mostly unknown story. He chronicles Leonard’s story, the role he played in the life of his most famous client, and the chaotic and history-making world in which he rose to prominence. Besides his proximity to the queen, Leonard also had a most fascinating life filled with sex (he was the only man in a female dominated court), seduction, intrigue, espionage, theft, exile, treason, and possibly, execution. The French press reported that Léonard was convicted of treason and executed in Paris in 1793. However, it was also recorded that Léonard, after receiving a pension from the new King Louis XVIII, died in Paris in March 1820. Granted, Leonard was known as the magician of Marie-Antoinette’s court, but how was it possible that he managed to die twice?
About the Author
Will Bashor has a doctorate in International Relations from the American Graduate School in Paris,
and he teaches at Franklin University, Columbus, Ohio. His interests have ranged over many fields,
among them the study of international law and business, linguistics, cultural anthropology, and European history.As a member of the Society for French Historical Studies,he attended its annual meeting sponsored by Harvard University in Cambridge in 2013
at February 05, 2014

thanks Paulita for your honest review. another nice example of some more hidden people who can play great parts in the shadow of the great

What a cool cover and title:) Thanks for sharing.

I watched this movie about Marie A. and Versailles on the weekend.
Sorry cant remember the title it was all in french with subtitles. She had a personal reader. Marie did and she was in love with a duchess. if I remember it I will let you know.

Diane, Thanks for visiting.
Lucia, Hope the movie title comes back to you. This book had so much about the French revolution that I didn't know.

It puts my hair "routine" to shame. I don't even own a comb

This sounds interesting. I did know a little about her hair dresser. Would be interesting to learn more. Thanks Paulita!