First Paragraph, Tuesday Teaser -- After Her 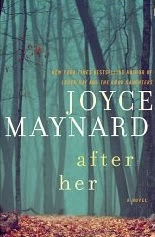 The town where my sister and I grew up lay in the shadow of Mount Tamalpais, not far north of San Francisco. The aging housing development where we lived, on Morning Glory Court, sat just off an exit of Highway 101, eight miles north of the Golden Gate Bridge. Buses ran from where we lived to San Francisco -- the bridge marking the entrance to that other world, though we also knew people came there to jump. But for us, the city might as well have been the moon.

Also this week  is Teaser Tuesdays. Teaser Tuesdays is a weekly bookish meme, hosted by MizB of Should Be Reading. Anyone can play along! Open to a random page of your current read  and share a teaser sentence from somewhere on that page. BE CAREFUL NOT TO INCLUDE SPOILERS! Share the title & author, too, so that other TT participants can add the book to their TBR Lists if they like your teaser.

The intro to the prologue was actually more interesting to me so I'll us it as the teaser:


A little over thirty years ago, on a June day just before sunset -- alone on a mountain in Marin County, California -- a man came toward me with a length of piano wire stretched between his hands, and the intention of ending my days. I was fourteen years old,, and many others had already died at this hands.

Sounds really good to me!

Here is my teaser

this sounds familiar to me too--was it a movie? enjoy your book. kelley—the road goes ever ever on

Maybe it sounds familiar to some of you because other bloggers have featured it. Not sure. Thanks for stopping by.

I like the second one much better. Great teaser.

Wow -- that is one great teaser. Thanks for stopping by!

Sounds interesting, I would certainly keep reading. Thanks for the visit today.

Wow! This sounds like a scary thriller. Good teaser.
My Teaser is from THE CALICO HEART.

Never heard of it, it sounds great though! Here is mine.

Sounds good. Really pulled me in.

I loved this book! In fact, I am such a Maynard fan that I can't wait for her next one!

I have this on my stack and need to get to it.

I'm never sure how graphic these kinds of books may get though. Hopefully not too much

A mystery writer new to me! I'll have to try it.