Every Tuesday, Diane at Bibliophile by the Sea posts the first paragraph of her current read. Anyone can join in. Go to Diane's website for the image and share the first paragraph of the current book you are reading.
One good thing about being sick is the chance to sit and read. I started Still Life with Bread Crumbs by Anna Quindlen. Here's the intro.


A few minutes after two in the morning Rebecca Winter woke to the sound of a gunshot and sat up in bed.
Well, to be completely accurate, she had no idea what time it was. When she had moved into the ramshackle cottage in a hollow halfway up the mountain, it had taken her two days to realize that there was a worrisome soft spot in the kitchen floor, a loose step out to the backyard, and not one electrical outlet in the entire bedroom. She stood, turning in a circle, her old alarm clock in  her hand trailing its useless tail of a cord, as though, like some magic spell, a few rotations and some muttered curses would lead to a place to plug it in. Like much of what constituted Rebecca's life at that moment, the clock had been with her far past the time when it was current or useful.

I think that second paragraph doesn't go at all with the first paragraph, but the book has definitely captured 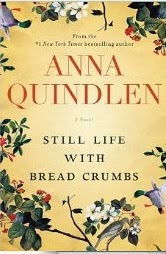 me with Quindlen's warm writing style. This is the story of a photographer who had one of those famous pictures in the 1970s-80s that people made into posters and hung in their dorm rooms. Now the money from that picture has dried up, she's trying to pay for her mother's nursing home and her father's apartment, so she sublets her fabulous New York apartment and takes a rundown cottage in the country to try to make ends meet.

Also this week  is Teaser Tuesdays. Teaser Tuesdays is a weekly bookish meme, hosted by MizB of Should Be Reading. Anyone can play along! Open to a random page of your current read  and share a teaser sentence from somewhere on that page. BE CAREFUL NOT TO INCLUDE SPOILERS! Share the title & author, too, so that other TT participants can add the book to their TBR Lists if they like your teaser
Here's my teaser from page 34:


Rebecca never hung her own work in her home. She felt it would be like talking to herself. Which she did a fair amount in the cottage these days. Otherwise she would never speak to anyone.

Anna Quindlen's new novel is a popular choice this week... I want to read it, too!

I featured this book as well! I hope we both enjoy it!

I loved this book! And I can really relate to the teaser...the part about talking to oneself. One week, I realized that I hadn't spoken (out loud) to anyone for a week! LOL

Can't wait to read this one. I'm on the library hold list. Enjoy!

This sounds like it will be a good one. I hope you enjoy it!

Wow--three readers on this book this week. Are you guys in a book club together? :) I think I'd give this one a go, it sounds really good. kelley—the road goes ever ever on

Indeed, a popular choice, it just goes to show that lots of book reviewers seem to be choosing this/ enjoying it. I am curious now.

This sounds like a great story. I like the description of the setting in the first paragraph. Sounds like a disappointing place!
My Teaser is from WILD.

I'm eager to read this one too. It seems to be very popular today.