Swimming in the Big Arena

Can you all stand another post about high school swimming? At least you can know that the topic will soon be put to rest.
But, after the competition at States on Thursday, the boys relay made it into the finals on Friday night. Tucker was number 17 in the 50 free, so that means he is an alternate in the finals.
Just saying this makes it seem like the swim meet was fairly calm.
It wasn't.
Tucker swam the 50 free as his first event. His time wasn't as good as it was last week, before he got the flu.
Within a few minutes, I had a text message from the swim coach. Tucker wanted to "declare a false start" rather than swim the 100 free.
Earl immediately felt he needed to swim it. That seemed to be what most of the dads around us said. He had made it into States in the 100 free,  he shouldn't miss the opportunity.
But the flu has a big impact on the lungs, and after swimming the 50 free in 22 seconds, Tucker felt his limitations. He told the coach that he wanted to save his energy for the relay, which had a good chance to make it to the finals.
So the coach was able to pull Tucker out of the 100 free, and when that event swam a few minutes later, an empty lane at the end of the pool showed where Tucker should have been.
When the 200 relay swam, they placed 15th which put them in the finals Friday night.
I recorded the race on my sister-in-law's iPad. My favorite part is before the race starts when Tucker puts his hand on a teammates shoulder and gives him some words of wisdom.
Here they are cheering on their final teammate Josh as he swims. We knew Tucker had one more event to swim -- the 400 free relay, in which each boy swims a 100. I thought that Tucker might let the extra boy on the team swim his leg of the race, but when that boy came up to the stands, I realized Tucker was going to swim it.
The boys finished 22nd in the 400 relay, so they won't move on to the finals. One of the teammates, Tucker's best friend Josh, was disgusted with the way he swam and walked away at the end of the race, but I got a picture of the remaining three swimmers. 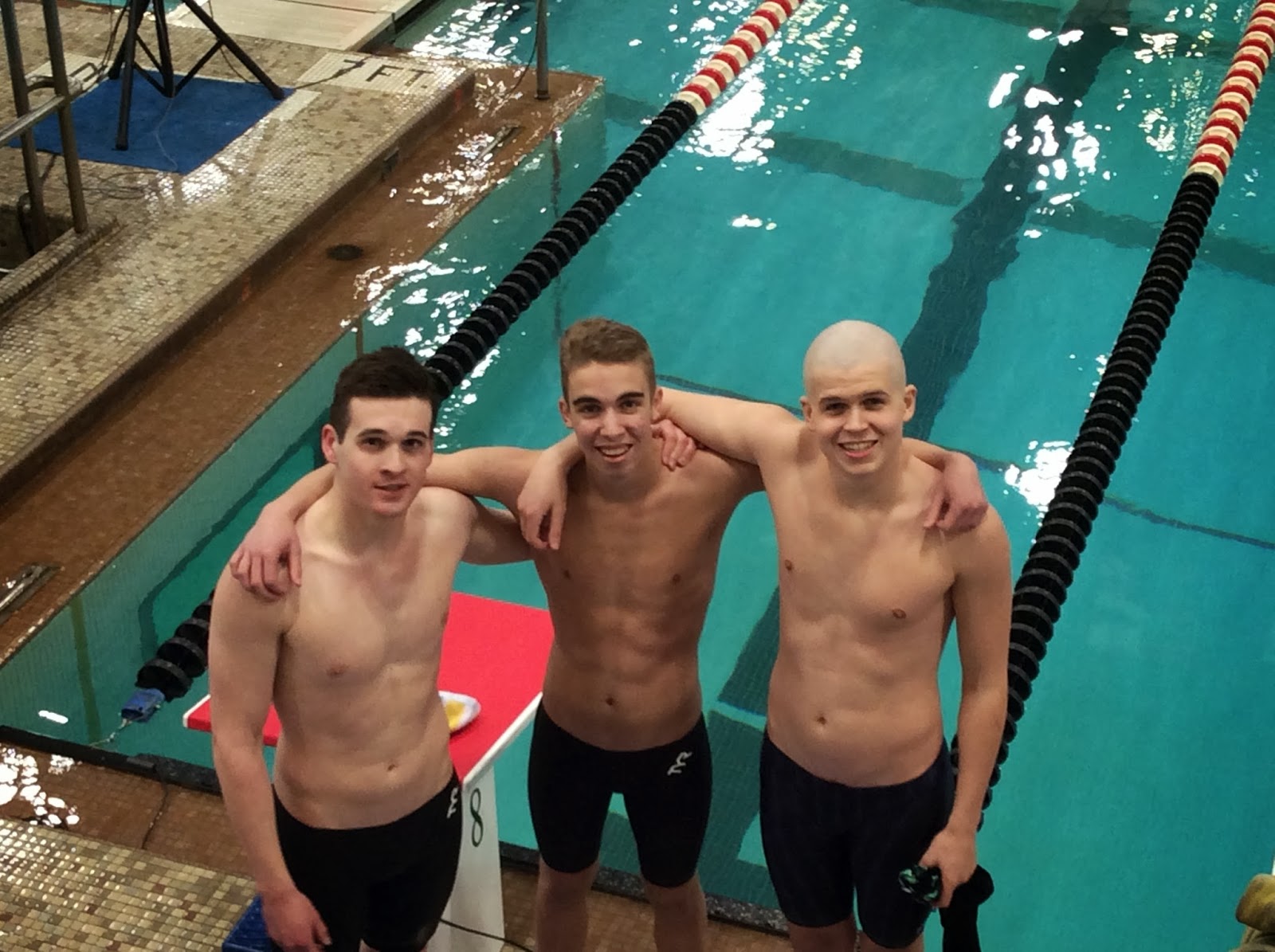 We thought we were finished for the day, but Tucker had tied with another swimmer in the 50 free. He had to have a swim off. I thought he might just concede so he didn't have to swim again. But he decided to get competitive. Sucked up his energy and swam against another boy who had the exact same time.
Tucker won. I think that puts him in 17th place. So he won't swim the 50 free in finals unless someone else doesn't swim.
So for today, back to Canton, Ohio. That's about a two-and-a-half-hour drive. Earl can't go today, so unless I can convince Grace to come along, I'll be on my own or catch a ride with other parents.
at February 21, 2014

All these moments are so special….& provide so many memories later. Hope Tucker is feeling better. Pretty impressive swimming with the flue…I could not have done it.

Oh my gosh. What a suspense and emotion filled day. Duh....I guess I never realized how much emotion goes into competing. Of course it does.

Thank you so much for your willingness to report the details back to us. ( Love that you are a reporter at heart.)

Tucker is having a senior year that he'll never forget. smile

Wonderful pictures. Brings tears of happiness to my eyes. You must be so proud of how Tucker was able to handle all the decisions he had to make yesterday. He's a real Champ!

Thanks, Sally and Just Me. Nice to have that validation and support from other people in the blogging world