Why didn't I take pictures today?
I went to work on costumes for the high school musical. The kids are doing Kiss Me Kate. Tucker is Fred, although I haven't seen the movie or play, so really don't know what that means.
Today, Jenny, the woman in charge of costumes, told me to find hats. They need 1940s hats and Shakespearean hats. Apparently the actors in Kiss Me Kate are performing The Taming of the Shrew, a play within a play. 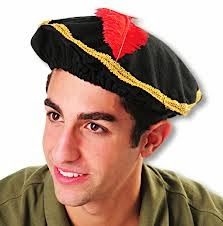 Jenny searched for images of Shakespearean hats to show me. Mostly, I thought they looked like throw pillows on people's heads. Here's an example.
Then I had to decide whether to search through the throw pillow box or the hat box. I could take throw pillows, add feathers and cut holes in the bottom of pillows so they fit on the kids' heads.
Truthfully, a beret with some tissue paper pushed into the corners and some gold braid along the edge would work too and might be a little easier.
Letting me loose in a room with bins full of hats might have been her first mistake.
Within minutes I was back out in the hallway modeling hats.
Sometimes, when you see a hat, you just have to put it on. 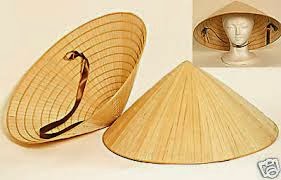 This bamboo hat was awesome, but I couldn't convince Jenny that it would work. Although she later found a woman's hat from the 1940s with the same shape and covered with fabric. So we might make it work yet.
Jenny threatened to take the job away from me if I didn't get serious. So I went back and started sorting through hats.
I found a lovely olive green beret. I put it on and began to sing "La Vie en Rose."
I continued to paw through fedoras and driving caps when I heard Jenny call me from out in the hallway.
I hurried out there again, forgetting about the beret. Jenny and her son, Eli, started to laugh.
"Every time you come out you have a different hat on," Eli said. Isn't that the point of finding hats?
A hat can definitely transform you.
We also pulled some fancy women's hats for the 1940s. Hats similar to this.
I also found a hat that had a scarf attached that ties under the woman's chin. Jenny threatened to remove the scarf part but I protested.
Someone else in the group reminded us that the Baroness from The Sound of Music had worn a hat like that.

I carried the pile of hats into the hallway for Jenny to approve or discard. Then she called a meeting of the wardrobe crew and everyone put on a hat as we discussed what needed to be accomplished to complete the costumes in three weeks.
At one point the music director walked into the hallway and started laughing. We all looked at him puzzled then he pointed out the hats.
We'd forgotten.
at February 13, 2014

OMG You are too funny. I can "feel" Jenny loosing her patience, shaking her head and not being able to hold back her laughter, all at the same time.

Thanks, I hope she felt all those things!
I gave her a ride home so she couldn't be too put out with me.

I wish I felt more confident to wear a hat. I always feel foolish. Love them on others though.