On Tuesday, I posted the first paragraph of the book that I hadn't begun yet. I finished What Alice Forgot by Liane Moriarty yesterday and 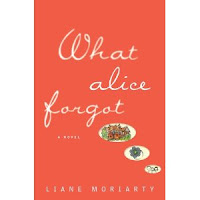 truly enjoyed it -- maybe, because I haven't had time to do much reading this summer or maybe because the concept really made me think.
The book focused on Alice who wakes up lying on the gym floor. She passed out during spinning class. When she wakes up she has lost her memory. As far as she knows, she's a 29-year-old pregnant with her first baby and deeply in love with her husband. In truth, she's 39 years old, mother of three children and divorcing her husband. Because she doesn't remember the 10 years that have passed, she tries to figure out how she became this 39-year-old person. She discovers that she changed quite a bit, some for the better, but she also gained many personality traits that the 29-year-old Alice would not have approved of.
Of course, I've been thinking about paths a lot lately as Grace decides where she'll attend college in the fall and I celebrated 21 years of marriage. It's funny to consider where other paths might have taken me.
Some parts of the book are jarring -- the idea that dozens of petty actions by her husband led to divorce, but it's true that those things build up. The 29-year-old Alice is also surprised the way her friends talk about the other mothers -- so catty. And that's an easy trait to fall into as well.
So, although the book is a breezy read, it is thought provoking and fun. I already passed it along to a friend at 7:45 this morning when I dropped Spencer off to catch the bus for a day of basketball.
at June 24, 2011

I think about paths taken and not taken often. Just by moving to Texas when the kids were fairly young we changed where they would go to college and who they would marry. By moving to Austin after my divorce, I eventually met my French husband and here I am in France. You just can plan these things.