We have some good friends from church who are wealthy and generous. This is a winning combination to have in friends.
Yesterday, their youngest daughter graduated from high school, so they celebrated with a mass and breakfast at a nice hotel in Columbus.
I have to admit to some jabs of feelings about "buying favors" that hark back to the Middle Ages when people could buy their way into heaven. I probably could not afford to pay a priest to come to a hotel and say a special mass for one of my children. However, these friends are so active in the church that they may not have paid. Perhaps the priest did it for free to repay them for all their work. And I know there was some consternation because the priest who was flying in from New York got kidney stones and the regular priest at our church had to take over. 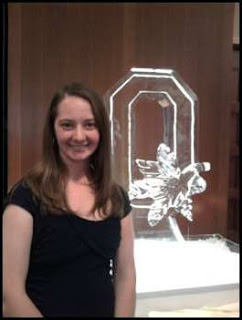 At the end, all of the graduates were invited to come forward for a blessing, so our friends definitely spread around the godliness.
After mass, we moved next door for an elaborate breakfast buffet. The grad will attend OSU so I took her picture with the block O ice sculpture. We moved along the buffet picking croissants, pastries, egg souffles, Belgian waffles, fruit, cinnamon rolls, pecan rolls. Bottles of juice sat alongside the coffee urns and (my favorite part), a stick with rock candy on it to put in the coffee so it can melt and sweeten the coffee. A bowl of whipped cream sat beside the coffee too. 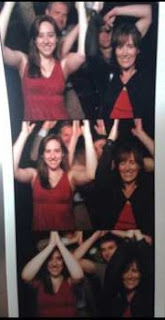 After we had eaten and visited with friends, Earl, Grace, Spencer and I squeezed into a photo booth to have our pictures taken for Sydney. Since she is going to Ohio State, we decided to do the O-H-I-O arm motions for her. Grace and I are very visible. Earl and Spencer, not so much. Sorry guys. Sometimes it pays off to be short.
I cautioned Spencer not to get his hopes up that we would throw him a similar graduation party next year, and, even though he said the food was "the best he's ever had," he thought he might be satisfied with some hot dogs on the grill.
Another friend's daughter who will graduate next year told her mom that she hoped they'd be able to afford something that nice for her wedding, nevermind the high school graduation.
at June 06, 2011

So my last minute invitation to an impromptu party will be kinda lame in comparison. :)

It won't be fancy, but it will be fun. It'll be Beth's last minute school work to pull out a high school diploma that will be amazing.

My sister's wedding (fourth) to a wealthy man was like that-food stations all over the place. It takes a lot of money to do things like that.