The inkling began when I saw this.
My blogging friend Corey had an iPhone and was posting fabulous photos from her home in Provence. Throughout the day she updated her blog. She took videos at the French brocante (flea market), spoke with her French husband, and shot a video at the edge of a cliff in Cassis. Okay, maybe Apple was paying her to sell the iPhone, but my mind began to plot.
With an iPhone, I could update my blog while I travelled. I could take pictures and videos without carrying along my clunky camera. I could use the iPhone as a reader rather than buying a separate eReader.
I needed a new phone. My phone was beaten and battered. It quit for no reason and sometimes I'd have to remove the battery and replace it to get the phone to work again. We had a credit I could get the iPhone for $99. I ordered it and anxiously watched for the FedEx delivery person.
Today my iPhone arrived. I set it up and waited for my life to change. I expected that I might look out the window and see a mountain soar toward a painfully blue sky just like Corey did with her first iPhone photo.
Instead my front porch is still here in Ohio, but the new cushions on my porch swing look a little French. 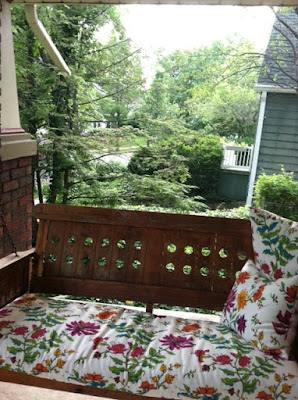 I guess the iPhone won't change my life. It might take me awhile to figure out how to text and make calls, much less post videos on my blog.
Who knows, maybe this is only the first step toward a fabulous new life that Earl and I will have in Provence someday, and I'll take my iPhone with me.
at June 09, 2011

I just got an Iphone. I can take photos with it but for some reason I can't get them directly to my blog. I haven't even tried the video part yet. It's an amazing phone. I love downloading camera apps. to use.

beautiful colors. do we have good taste or what?

I love my iPhone 4. I hope you learn to love yours as well. I would give up my iPad before my iPhone if I had to choose LOL

well we're a blackberry family but have fun with that iphone! if you haven't figured it all out by the time I get home we'll get together to play with it.