Did I say I was tired of parenting? Well, I've only just begun my summer of intensive parenting. This time, I'm taking a page from the ABC television show The Middle. This show has been on for a couple of years and it makes me laugh. It has a teenage son, middle school daughter and elementary-aged son with some quirks. The family lives in Indiana (not too far from Ohio) and the parents both work. They're always rushing to kid activities and their house is a shambles. Dinner usually is fast food take out eaten in front of the television. It's fun to laugh at the things that are similar in my life (teenagers walking around in their underwear) and the things that are different (the fast food in front of the TV). Little did I know that I would employ one of their parenting techniques.
After I wrote about Spencer being in trouble a few days ago, I gave him the shortest bit of leash on Monday, and when I received a call from another parent, I knew that was a mistake. I have now instituted the Axl punishment. Axl is the teenager on The Middle. 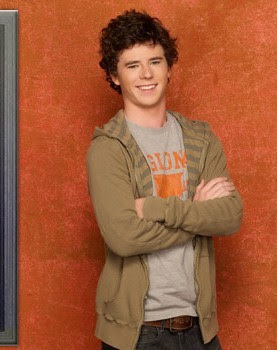 Here are a couple of his lines that are so appropriately teenager-ish:

They sent home a note. But you're always talking about how busy you are so I signed if for you. You're welcome.

If you don't want to do anything for us, why'd you even have kids?

During one episode, Axl's punishment was to stay within 5 feet of a parent at all times. When his parents wanted to have a private conversation, they closed him on the outside of the sliding glass doors. It was hilarious to watch, not so hilarious to live.
I've given Spencer a similar punishment. He stays with a parent, which is fine when I work days and Earl works evenings, but got a little tricky when we both had work at the same time.
I took Spencer with me to a staff meeting Tuesday.
He came along while I measured for costumes at the Community Theater where Grace is working on Pride and Prejudice.
At one point while I was measuring sleeve length and neck size, I looked over and saw a woman talking to Spencer. He shrugged. I asked later what she said. "She asked what line they were on," he said. He had no idea. I think the woman was developmentally challenged, which probably explains why she didn't know Spencer wasn't actually in the play.
As we were leaving the theater, the 20-year-old co-director came running up to Spencer. I was talking to the woman in charge of costumes, but like one of those fuzzy television shots, I felt like we were in the foreground and the camera was actually focused on Spencer who loomed over the tiny 5-foot tall woman. She craned her neck to look up at Spencer's 6-foot, 4-inch frame. I heard her high-pitched voice then the deep rumblings of his reply. As we left, he told me she had asked him to join the play. They need more men. 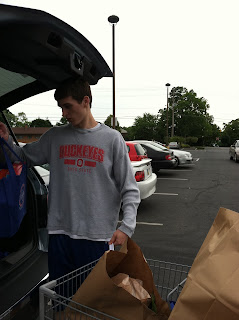 "I respectfully declined," he said.
Wednesday morning, he got to go to weightlifting with the basketball team, but I asked the assistant coach to drive him home afterwards.
"If you'll drive him home, I won't have to stay during weightlifting and bring him home myself," I explained. The coach agreed, probably imagining that having a mom in the weight room would curtail a lot of swearing and guy talk.
Yesterday afternoon, Spencer heard me talking about going to the grocery. He asked if he could come along so he could get out of the house. He pushed the cart and helped unload groceries onto the belt. I can't remember the last time he went to the grocery with me.
Last night, I had to teach a class. Earl was at work, so Spencer came with me. I didn't introduce him to the class. For two and a half hours, he sat to the side chewing on his cuticles and checking his cell phone for text messages.
We walked out to the car. A couple of guys from the class yelled their goodbyes.
"Was it different than you expected?" I asked as we pulled the car doors shut.
"Yeah, the students were different," he said.
Then, "You're a good teacher, Mom."
"Thanks, Spencie," I said and rubbed his head. I didn't ask for more details. Maybe he was just trying to suck up, but sometimes he's still my little boy.
Tomorrow, he leaves for 3 days of basketball camp, so he's the coach's problem then, although he has taken vows of the straight and narrow.
And next week, I plan to ease back on the constant parenting time. He may be grounded for a few more weeks, but eventually he has to learn to make the right choices without a parent standing over his shoulder.
at June 15, 2011

you *are* a good teacher... and not only in the classroom

I don't know too many parents who would hand out such a punishment, seeing what it demands of the parents.

I never heard of this and I'm floored by the wonderfulness of it....

The Middle stuff was hilarious.

You are right that this consequence has sharply affected what I can do, although last night I did make him sit through an episode of Toddlers and Tiaras. It's hard work and I'd much prefer an easier route.

Ethan spent an entire summer with me when he was 15 for something that he did. It ended up being kind of nice actually (for me anyway).