I was working at my computer in my office (hallway) when Spencer came in from school yesterday a little later than usual.
"Hey. Where've you been?" I asked.
"Working on bio," he said. He's taking a biology 2 class, which isn't as challenging as his chemistry class.
"Good day?" I asked, my eyes half on the computer screen where I was grading papers.
"I got a date to prom," he said.
That got my attention.
Then Earl walked up and asked if Spencer would help him move something heavy at the neighbor's house.
"Who is it?" I asked as they walked toward the back door.
"Claudia," he said as they left. She's a girl his age. One of those startlingly pretty girls who didn't seem to exist when I was in high school, but who seem to fill the halls these days.
I wanted more details but I would have to move slowly rather than bombarding him with questions.
A few details trickled out. They were leaving bio after school when he asked her.
"Did you feel like Harry Potter?" I asked.
He smiled. My family has read and listened to Harry Potter enough that he knew exactly which scene I meant.
The scene in Goblet of Fire where Harry has to have a date for the ball. He blurts out to Cho Chang, "Would you go to ball with me?" running all the words together so she can't understand him. I can hear the voice of Jim Dale, the Harry Potter narrator, saying the words.
Spencer smiled. "It's embarrassing, but that's just what I was thinking."
But, her friends had already let him know that Claudia would go to the prom with him, so he wasn't as nervous as Harry Potter must have been.
The experience made me think back to my own prom days.
When I was a sophomore, I was a last minute date for a guy named Brad whose date got sick. I wore a cream-colored dress with ribbon straps on the shoulders, and Brad brought me wrist corsage of white carnations tipped in brown. I know. Couldn't we just have waited a few days for them to wilt to get the tipped in brown look?
We lived in a small town about 30 minutes from Cincinnati, so the prom was held at a fancy hotel in Cincinnati. I don't remember where the after prom was, but I know Brad asked me if I wanted to start dating. I can't remember if I said yes or no, but we didn't after that anyway.
Then my junior year I went to prom with one of my best friends, Bobby. When I couldn't find a prom dress I liked, my mom made me a dress of dusty rose material. It has a drapy look over the front and Mom, following the pattern, had to put a weight in the material to get it to drape correctly. 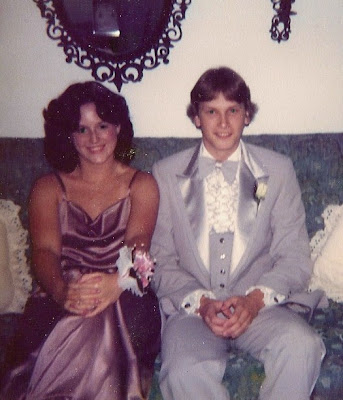 Here we are sitting on the couch for a prom photo. Love the hair -- both of us with our wings flying out. Isn't he a cutie!

We were driving to Cincinnati for prom and first went through the drive-through at McDonalds to buy Cokes to mix with the rum we had brought along. We were such bad teenagers. A lot of the couples got rooms at the hotel where we had the prom. They were even naughtier teenagers.
Going with my friend Bobby was much more fun than an actual date and he kissed me at the door as the sun rose.
That afternoon, for the AfterProm, we all went canoeing. Bobby canoed us right under a tree where a snake was dangling from a branch and I screamed at him. He continued to be my friend for years after that.
I graduated after my junior year, so I never went back for a senior prom.
Do you have any fun or horrible prom memories? Do they have prom where you live?
at April 06, 2011

Yes we have prom! I didn't go to prom! My friend and I, her boyfriend and his friend that I was dating on and off (FWB)went to a country bar! Drank 2.00 drafts and got totally blitzed bad teenager you bet! I just hope my daughter doesn't follow in my footsteps!

I know. No matter what my teenagers do, I was worse than they are.

I went to 2 proms. One with a boyfriend, one with a friend (who wanted to be more than my friend). I really don't remember what we did...I just know it wasn't what I told my mom.But it wasn't nearly as bad as what she assumed I was doing. Which leads me to believe that she has her own stories!

Congratulations to your son for getting a date to prom! That is very exciting! Haha, that's funny that he knew what you meant when you mentioned the Harry Potter thing. I have never read the books or seen the movies, but I have heard they are good!

It's amazing how often style changes. You and your date though both look beautiful...and handsome!

I haven't been to prom yet, I plan on going this year which is my sophmore year! We'll see though, I am still undecided.

I love that photo. I went to my Junior Prom, but my friends and I did not want to go to the Senior prom...LOL

I never went to a prom although my high school had them. I just didn't date back then-too shy.