Today was the most gorgeous day of the year with the temperature climbing to 80 degrees and the blossoms suddenly bursting forth on the trees.
Spencer is playing AAU basketball, which means many weekends are spent at local basketball tournaments. Today's tournament was 45 minutes away and they played at 9 a.m. so we left before 8. The morning was foggy and eerie until about half way to Lancaster. Then the sun burned through.
Only five guys showed up for Spencer's team, so they all played hard the entire game without any subs, getting only a 3 minute break at half time.
Spencer had some friends over for awhile then they decided to go bike riding. When Earl and I got home from ballroom dance class, a sweaty Spencer was sitting in a stupor on the couch. I took the boys for ice cream then Spencer swung his legs over the arm of the chair and he fell asleep while Tucker controlled the remote control. When Spencer roused after a little while, I urged him to move to the now vacated couch so he didn't get a stiff neck.
As the bright sun headed toward 6 p.m., it left these shadows on my tired boy's sleeping face. 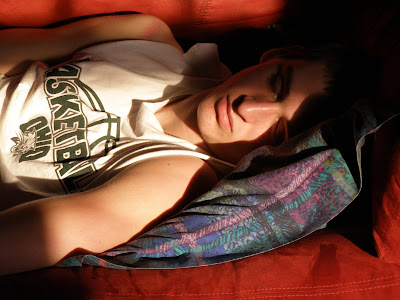 An afternoon nap well earned during a pretty satisfying weekend.
at April 10, 2011

Is there anything better than a Sunday afternoon nap?

I am so jealous! It has been a very long time since we have had 80 degree weather.
That sounds like a super busy morning! But it sounds like it went well which is great!
Haha, I always thought naps were for babies. But the older I get the more I have come to realize that naps are great for all ages!

I still love to watch my "baby" boys sleep and they're 23 and 25! They look so young and innocent....even though I know they're still relatively young...they're NOT innocent!