No, we didn't take another trip to Paris, but I reminded Earl that last year at this time we were anxiously anticipating our trip to Paris. We decided to create our own France staycation by walking downtown for coffee and dessert. 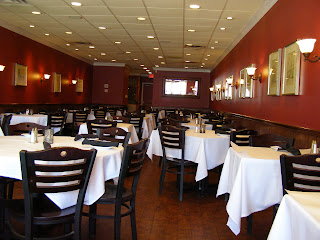 We went to one of our favorite restaurants Roma Trattoria. We got to the restaurant just moments before they closed between lunch and dinner. They seated us along the front windows and we ordered espressos while we perused the dessert menu. 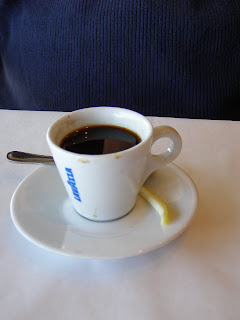 Earl is a tea man usually, but he drank some espresso in Paris and decided that he would drink coffee for our Paris staycation. I'm not sure if espresso tastes better in Paris, or if everything tastes better in Paris, or if it was the lack of sugar cubes. A sugar cube is more sensory satisfying than a packet of sugar. Dropping it into the cup then using that tiny little spoon to stir it around, watching it melt slowly until it melded with the espresso.
Earl went for the chocolate cannoli for his dessert. 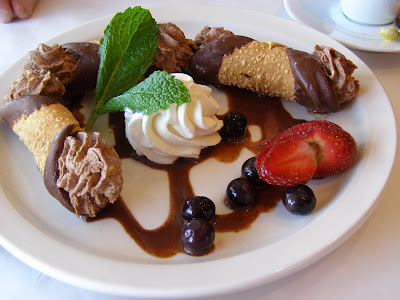 And I chose the lemon torte with vanilla bean ice cream. I don't usually like ice cream with my desserts. I don't like switching from the warm to the frozen. In this instance, the warm and the cold melted in my mouth. Delightful. 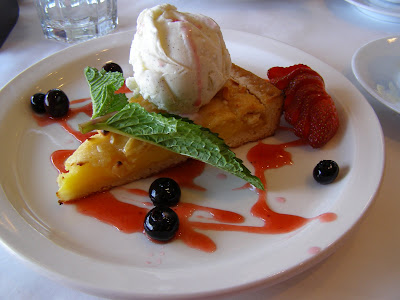 After our coffee and dessert, we walked to the grocery store and bought some French brie. When I was paying, I looked curiously at the cost of the brie. I thought the tag said $5.99 but it rang up $6.99. While Earl waited at the door, I went back to look at the price. Sure enough, it should have been $5.99. We went to the customer service desk and I showed them the receipt and the cheese.
The woman gave us back $7. When it rings up incorrectly, the buyer gets the item free, she explained. Plus, she was the only one behind the desk and she didn't want to go check the price. So, with our free brie, we walked down the street to Panera where we bought two baguettes. One baquette was to go with the cheese, the other baguette was to assuage the boys when they got home from school.
We walked home with the baguettes jutting from the bag and saw the spring flowers blooming in yards. 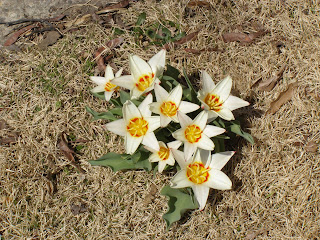 With our cheese, baguette and a new bottle of red wine, we were set for our Friday night date with House Hunters International France night.
Tucker claimed we were pitiful when he discovered our plans to watch six episodes of House Hunters International set in France. But he went to a Cake Walk, so who was he to talk?
Earl and I sipped wine, ate bread and brie and watched a couple of professors buy a tiny apartment in Paris, watched a British family choose a country house in Normandy, watched a single woman and her mother squeeze into a studio apartment in Paris, watched a family from New Orleans get a country house near Toulouse, and I went to bed while Earl watched a couple searching for a bed and breakfast.
We may be pitiful, but it was a lovely France staycation for us and cost much less than last year's 10-day trip to Paris.
at April 02, 2011

I love it ♥ such a great word too, Staycation .. sounds like you had a trip to Italy too, with a Trattoria and cannoli for dessert :-)

I loved how you spent your day, and traveling so inexpensively as well...LOL

I am so jealous right now. Last night the only food I had time to get was one of those little cold starbucks things, yogurt and a pub cookie.

It sounds like fun to me. I almost got interviewed by some British TV show about buying apartment in Paris but it never happened. I think it would have been fun.

A fifty-something couple over here simply loves the idea!

I love watching House Hunters International...that's a greay way to do some inexpensive travelling and I always say one day!

The sure sign that you were not REALLY in France...you pointed out an error at the store, and not only did the clerk not sigh dramatically, she actually gave you ....yes....CUSTOMER SERVICE!