I want it established right up front that walking to the library was my idea. I had a whole route planned out where we could stop by the bakery to get a baguette then have a coffee at the coffee shop then run by the grocery store.
It's true that my friends and I canceled our morning run because the wind howled through the trees and a cold rain fell. By 10:30 or so, the morning seemed to have cleared up. Let's say the weather resembled this day along the Atlantic. 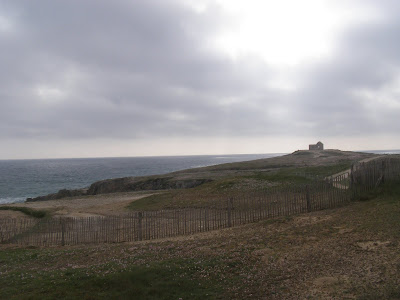 I remembered to grab the big umbrella from the back of the car and I said to Earl, "How about if we both take umbrellas?"
"Nah," he said. "It's not going to rain."
So we walked to the library in the light breeze avoiding puddles on the sidewalk. We picked up an Italian movie for tonight then we took a turn up a side street to go past the school.
A drop of rain fell on my arm. Then another. Thunder rumbled and a shrill whistle blew at the field. Soccer was canceled due to thunder. The kids ran screaming from the field as Earl opened the umbrella and held it above me.
I understand that holding the umbrella can be a tiring job and I am thankful to him for doing it, but, to be honest, the person not holding the umbrella gets wetter than the person holding the umbrella. He thinks he is keeping me dry, but he is a foot taller than I am, so inevitably the rain begins to soak my shoulder.
We walked fast but the rain became more fierce as the thunder rumbled. In a yard between two tall buildings, the rain came in at an angle blowing my hair across my face.
"Get on my other side," Earl said as he attempted to block the rain with the umbrella. We rounded the corner headed toward Panera and the rain suddenly turned to hail bouncing off the sidewalk in little chunks. The rain came straight at our faces and Earl held his umbrella in front of us and it buckled.
I ran for it. My jeans were soaked. My wet hair curled wildly. My socks were wet inside my shoes.
We decided to get the baguette and the coffee at Panera so we didn't have to go any farther. We shivered in the cool restaurant trying to warm up with the hot coffee. When we finished, the rain had stopped and we walked straight home with the sun trying to peak out.
Now the weather looks like this, kind of mocking us as we hang up our wet jeans and put on dry socks. 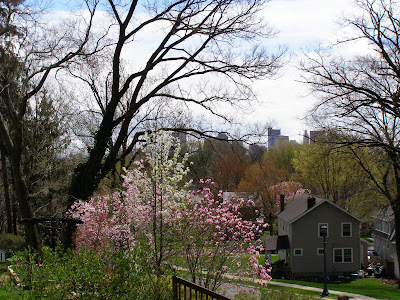 Lesson learned? Probably not. Unless I carry two umbrellas, we'll probably have to share again next time.
Do you think it's a marriage problem if I want my own personal umbrella in the rain? Does that mean the romance is gone?
at April 16, 2011

Sorry we missed your call, Dan and I had actually just walked to the post office, Caribou and Giant Eagle. We stopped at the house to drop off 3 boxes of juice boxes for Thomas' soccer game, then we were going to walk to the dry cleaners. In that minute we stopped at home the storm blew in. We managed to completely avoid it. I guess our timing was a little better than yours. :)

Nah, one umbrella or two - you both weathered the storm together, and that's what counts!

I always carry a little umbrella in my purse since unexpected showers are the norm here. My husband doesn't usually get under it and he complains the whole time that I'm going to stick the umbrella in his eye so I try to walk behind him.