I was supposed to run with Dream Girl and Pam this morning, but my knee is a little swollen and I thought 7.5 miles would be pushing it. So I stayed in bed where the cats pestered me until I finally got up to feed them.
Since I'm not running with my friends in my weekly therapy session, I may as well write about them.
For anyone who doesn't know the story of Dream Girl, she was diagnosed with breast cancer last March. She had a lumpectomy at the end of that month. She and her husband went hiking on the Appalachian Trail then she began her chemotherapy treatments and met us each Saturday for a run. She was amazing. She out ran us throughout the summer and throughout her chemotherapy. She kept running through the summer and into the fall She ran the half-marathon in October.
Now Dream Girl has hair again and has had two haircuts. 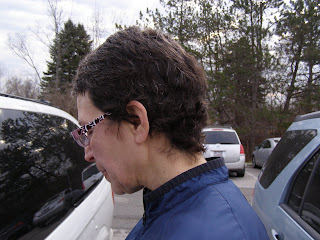 This isn't a good picture of her because we had just run 7 miles and I made her take her hat off for a picture, but as you can see, her hair is back and it's kind of wavy.
When Dream Girl went to see her doctor, she told him that people kept asking if she was cured or in remission. She didn't know what to tell them.
The doctor said she won't be considered cured until she has gone 10 years without a recurrence of cancer. Gulp.
How will she know if it comes back, she asked. Scans, blood tests, xrays?
"Your body will tell you," he said.
Double gulp.
What does he mean her body will tell her? Did her body tell her about the original lump? Not soon enough.
I don't like the idea that the doctor is relying on her to figure it out. I don't like it when the eye doctor shows me one lens then another and says, "Which is clearer? Lens 1 or Lens 2?" What if I'm wrong? You tell me, I want to shout.
But which lens is clearer is a much less important question than has my cancer returned.
The doctor explained that the scans are expensive and make a lot of money for the companies that give them, but he doesn't rely on them.
He told Dream Girl to begin self-breast exams again. She suggested that if the cancer came back it probably wouldn't come back in her breasts.
He said that if the cancer came back, the treatment changes from being cured to increasing the length of survival.
Yikes.
Here's to the countdown of 10 years cancer free for Dream Girl, who now has turned her worries away from her breast cancer and toward paying for college for three kids.
at April 09, 2011

Best of luck to Dream Girl & all the couragious women fighting this battle. Keep on running!

That is scary. I think if breast cancer spreads to goes to the bones so pain in her back might be a sign. I would think some sort of scan every year might be a good idea but I'm no doctor. Good luck to her.