Tucker has always been precocious. Maybe because he's the third kid and he caught on quickly to what his older brother and sister were doing. He learned how to work the mouse on the computer when he was 18 months old. He learned how to pedal a bike when he was two. He started the violin at 4 and quickly caught up with his older brother.
Does it count as being precocious if you can grow facial hair early?
Tucker just turned 15 and is growing a beard. 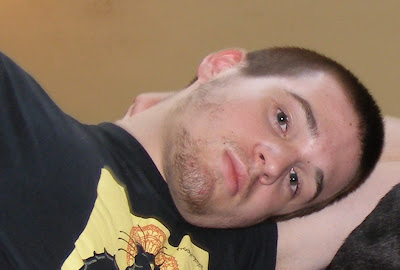 He has had a few episodes in the past where he refused to shave and the hair on his face looked scraggily, like Shaggy from Scooby Doo. This time, I think he's actually got something going. Luckily, he still has braces so he doesn't look like he's 20 when he smiles.
People have always told Tucker that he looks like his father. I warned him that he would get more comments that he and Earl look alike if he grew a beard. He was undeterred.
Looks are not the only way Tucker and Earl are similar though. Actually, both of my sons take after the father in this one way.
I was making French toast for breakfast on Saturday morning. I hadn't put the powdered sugar and spoon into a bowl like I usually do.
Tucker pulled the bag of powdered sugar from the "baking center" where I store it. As he took off the clip and began to unfold it, he started coughing. Then when he sprinkled the powdered sugar on his French toast and took a bite, he coughed again.
All of the men in my family get choked on powdered sugar. Earl has often told the story of how he nearly choked to death when he was a child because his sister sprinkled the brownies with powdered sugar.
No matter how much they all look like each other, or don't, they have that one trait, a hatred for powdered sugar. Yet, they continue to encounter it.
at April 13, 2011

Gosh, a beard. He certainly isn't a little boy anymore. I choke sometimes with vinegar for some reason.

Great story about the men in your life and their troubles with powdered sugar. Thank you for your visit, and your sweet story about mothers. Can I use that in the magazine? or would you like to add on it. I agree, what could make a beter life than a mother who loves you.
Have a good day,
Mimi