Family Games in the 21st Century

Last night, my brother Kevin, his wife Dawn and 14-year-old daughter Caroline came to our house to wait for their son in the Navy to land at the Columbus airport. While his flight was delayed and delayed again, we decided to play a fun game we got for Christmas. The thing is, the boys were gone, and we really needed another teenager to make the game more fun for Caroline. That's when we got on the computer and called Grace on Skype. We set the computer in front of a chair with the camera facing the game board so she could play too. 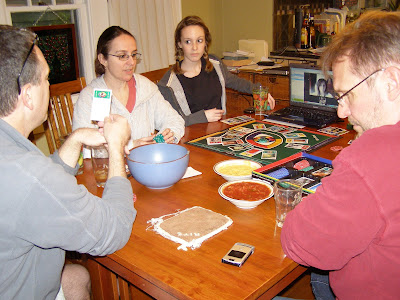 Do you see her on the screen there? Whenever it was Grace's turn, we held up the cards for her to make her choice then answer a question.
It may not have been as much fun for Grace as it was for us. I imagine it was a bit confusing as everyone talked and Kevin took the dog outside and we laughed at things that she couldn't see because the camera was facing the game board.
Still, it was almost like having her there with us.
Earl won by the way.
at April 23, 2011

That is really cool... technology is an amazing thing!

Yes, and it was nice to spend some time with Grace on a holiday weekend when she's 10 hours away.

that is really cool, I love skype. We do that at Xmas with my sister, BJ and Isa. We play our holiday games and unwrap our presents on skype.

And what was that game?

The game was called Eye Know. It has a picture of a famous person, landmark, animal, or manmade item and you have to identify it to win that card. Then you answer a question on the back of the card to win chips. Everyone who played has enjoyed it. Earl won.