I watched a few minutes of a show called Extreme Couponing last night on TLC. I know it's ridiculous, but I kind of wondered how someone could spend $600 on groceries and only pay $6 for them. I'd like to do that. Unfortunately, the show doesn't really explain how to save a lot of money with coupons. 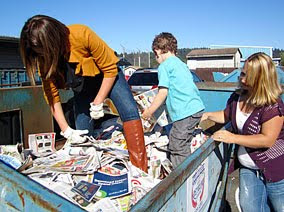 It focuses on a couple of families in each half hour episode. It shows the family's "stash" where they store loads and loads of items, like toilet paper, paper towels, canned goods, boxed goods. Then it shows them organizing coupons, going through the weekly sales papers and finally at the grocery store. The families pushed three and four carts each and the checkout took two hours. One woman bought $1800 worth of groceries and paid less than $100 for them.
That same woman said she wants her kids to be able to go to college without loans and that she has saved $40,000 on groceries by couponing. Earl was impressed that she had saved that much money. I suggested that she hadn't actually put away $40,000, but had avoided spending $40,000 on groceries. I'm sure that unspent money dissipated into the family budget somewhere. And if I was going to be really catty, I would point out that $40,000 would pay for one of her seven kids to go to college for two years.
Here's something I noticed while watching the show. First, stores don't offer coupons for meat or vegetables or fruit, so if the families were paying $6 for groceries, they weren't bringing home some of the necessities for a healthy diet. Most coupons are for pre-packaged-type things. Cookies, Pop Tarts, Ritz crackers, cereals that my boys would love to get their hands on like Reese's Puffs and Crunch Berries, filled the shopping carts.
Maybe once a person starts spending less and less on groceries, she can't break that habit to buy healthy foods, like $3 for a pineapple or $2.50 for a quart of blueberries.
One 24-year-old woman who lives with only her boyfriend and who was extremely overweight was up shopping at 6 a.m. to get to all the items she needed before the other shoppers.
She had a $5 coupon off Maalox and the store was selling it for $5.67. She bought 35 containers of Maalox.
If two people can go through 35 containers of Maalox before they expire, they have many more problems than their grocery budget. Maybe they need to start focusing on living their lives to reduce stress rather than clipping coupons and popping antacids.
at April 07, 2011

My coworker, is a couponer, and she shared this story with me today. It is really mind boggling. I could not imagine spending some 17 hours on coupons.

Personally, I hate coupons. Unless I can save $10.00 on a $30.00 clothing item at Macys, I'm not interested. for me it has to be easy and substantial..LOL

I never did well with coupons. They are always for something I don't need or use and I don't have the patience for the time required.

Thank thank thank you! I can't believe people actually spend so much time doing this! Don't they have real jobs and a families to take care of???

I pulled up your blog as a morning respite from paid labor and saw couponing.

Should I turn back and avoid the topic as I normally try very hard to do?

And to my delight, someone else is pointing out all of the craziness of couponing. There is God.

Okay. I'm not prepared to knock it but I won't discuss it, and refuse to watch it on tv. I do love reading views like my own on this topic.

THANK YOU and ALL YOUR READERS.

I tried to play the couponing game here in France, thinking that they were offering two for one. I proceed to buy two of all their deals (that I actually needed) and realized after I paid and then attempted to question them in broken french, that they were giving me the price of the second of all the items off of my NEXT purchase. I had to haul sacks of toilet paper, paper towels and eggs home on the bus and deposit them in this tiny apartment where there isn't room for an extra fork! However, toilet paper and paper towel packages make a lovely end table. End of couponing in France!

I saw the show too. It blew my mind. I use coupons when I can and always love getting a deal BUT the stash was just too much.
Some of it could be donated before it expires. I'm just not that organized!