I remember when they were little and the excitement built as we moved toward Easter. We'd color eggs and I'd plan the jump ropes and slinkies that I'd hide in their Easter baskets so they wouldn't get overloaded on chocolate. Sigh...
I mailed Grace an Easter box last week and I was left home with 15 and 17-year-old boys. Would they even want Easter baskets? They would never turn down candy.
"Are you still going to hide Easter baskets?" Tucker asked in the week before Easter. His eyes looked hopeful.
"Well...not me, but the Easter bunny will," I told him.
We talked about it the night before and decided the boys needed to get up around 8:30 so they could find their Easter baskets then get ready for church.
Tucker got up and took a shower. A shower? Before Easter baskets? See, what kind of excitement is that?
Spencer finally got up about 10 til 9 and stumbled around until he found his basket then collapsed on the couch. 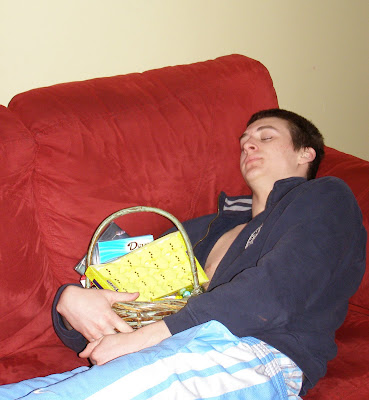 Tucker "didn't feel well" which curiously is how he feels most Sundays when we insist he accompany us to church. Easter was no different. He was angling to stay home even before he began looking for his basket. 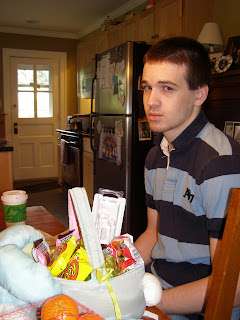 This is one of those "if looks could kill" given by a teenager and caught on camera. It practically makes me a wildlife photographer -- catching the native species in its natural, aggravated state.
After mass, we went to my sister-in-law's house to play with baby Caroline who was dressed in a floaty Easter dress but who had not tasted chocolate that day. Ah. The innocence. 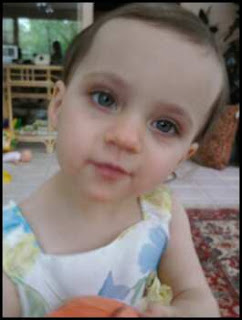 The only problem was that I took the picture with my phone and she kept tilting her head around to see the picture before I had finished taking it.
After a good meal, the boys interacted with their aunts, uncles and older married cousins. They carried on farily decent teenage conversations with adults and were in much better spirits when we returned home.
Hope your Easter was joyous, or at least you didn't have surly teens.
at April 25, 2011

This teenager would have been thrilled to be with you on Easter Sunday. If you really want to be thankful for now though, just think that in the not too too distant future you'll have the grandkids to color eggs with and hunt for baskets. Love you!

I love the tilting of the head and peering behind the camera look.

You are such a fun mom.

Easter is fun again once you have grandkids although I didn't spend time with any this Easter.