My friend Dream Girl is making me feel depressed. You remember her. She's the one who found out she has breast cancer. I was all worried about whether I would act differently around her, what I would say. And, of course, I was worried because I want her to get better. 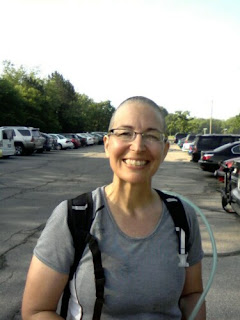 I see her every Saturday for our weekly runs and we stay in touch by email the rest of the week. Her emails have depressed me and it's taking a toll on my body.
I've already eaten a small box of malted milk balls and I just ordered pizzas for dinner. I haven't run this week at all either. I left the house two mornings to run and ended up walking around the block before coming back.
Today was Dream Girl's echocardiogram to make sure her heart wasn't affected by the heavy duty chemotherapy she has taken. Here's part of the message we receieved from her afterward:

So I ran far and did 6 hill repeats this morning to crank my heart up before my echo. I bombarded Janise, the girl who did my echo, with questions about how high a score I could get on my echo. Average/a good score is 55, and she said my previous 62 was really good, but I wanted to know what the best number would be. She said a younger person could get like 75-80, and that there were people my age that could get up to 70-75.

See, some people might think, "I have cancer. I need to treat my body gently." But Dream Girl thinks she should whip her body into its best shape ever while going through chemotherapy. She's running 60 minutes a day and doing extra hills, plus riding her bike on paths that run through corn fields. She's swimming laps without needing a swim cap (since she's bald).
She doesn't know the score on her echocardiogram yet, but here was the follow up message she sent:

I don't know my new score yet. I have to wait until I go back to the Dr. I'm hoping for a 70! Hee hee! It probably would be too if I had been swimming. Dang.

And you can probably see why this level of activity by someone healing from breast cancer can be disheartening from those of us who are complaining about plantar's warts or heavy periods.
Really, can any excuse stand next to the woman who is having chemotherapy, the woman who got jabbed five times at the doctor's office last week because they couldn't get a good vein. As she left the office, she reassured the lab technician that it wasn't his fault that he couldn't get a vein. Can Mother Theresa have been reincarnated into my friend's body if she was already alive when Mother Theresa died?
Some people might see this kind of reaction to breast cancer and be inspired to try harder. I wish it had that kind of effect on me. Instead, I feel defeated before I begin.
So, I'm eating malted milk balls and pizza before a night on the couch watching bad sit coms.
Don't get me wrong. Dream Girl is amazing. She's my hero. She's just flown so far out of my realm that I can barely see the soles of her feet any more.
at July 01, 2010

Next time you feel like a slug txt me and we can go walk!

She has rendered me speechless. I can only shake my head and show up to see what she's going to do next.

Dream girl loves to say miracles will happen but we can't know a head of time, what form they will take or what they will look like...... well there we have.

I'm happy that dream girl is doing well...Some people just have bodies and the mind built for it! exercise that is. I was doing so well until my heel started to kill me...I'm going back to my exercise routine even if it cripples me. Back to Zumba and body pump! I wanna feel good again.