Well, I, and some commenters, have mentioned changes in my eating plan, and since it has actually lasted more than four days, I guess it's safe to write about.
Grace and I have been doing P90X this summer. P90X is an intensive exercise program We do a different exercise six days a week. They usually last an hour but sometimes an hour and a half. We're on Week 7 now. We're feeling stronger and more flexible but some of those muscles are still hiding beneath fat. So we decided to eat better.
We were going to start two weeks before our trip to Florida, but Grace had swim meets through last Thursday. We knew we couldn't diet while training and competing was still going on. We marked Friday as the day to begin.
Friday morning, I woke up with a headache. Now, keep in mind that I hadn't actually begun this new eating plan, so I couldn't blame the headache on that. Our plan was to try the Fat Flush Diet that, some of you may recall, I tried last spring and ended up with a migraine and throwing up.
Just call me a glutton for punishment because on Friday morning, I poured the cranberry juice (unsweeted) and flax seed into a cup and downed it. Then I spent a few minutes leaning over the toilet puking it up. Apparently flax seed and I don't agree. 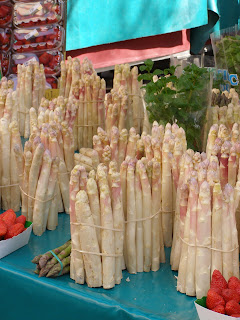 The Fat Flush Diet encourages cranberry juice, a few proteins, unlimited vegetables (on the list), and some fruits. As Sheila commented, the diet doesn't promote exercise the first few weeks. I think that's crazy! Why would I give up exercising to diet? Won't I get better results if I combine them?
The other thing that I don't realize most of the time is that other people don't exercise nearly the amount that I do. I should have realized when Dream Girl went for cancer treatment and they said she was in too good a shape to participate in the exercise and chemotherapy treatment. If I looked around me, beyond my running friends, I'd realize that most of my friends don't do hard-core exercise. I've slacked off on my running this summer and run three to four days a week. But I've added the P90X. So I exercise a minimum of an hour a day and sometimes more than two hours a day. How can I even need to lose weight? I'm convinced that all the exercise, especially training for the marathons, messed up my metabolism.
Because of all the exercise, and after feeling too tired to move the first few days, Grace and I have changed the eating plan a little bit. We are now eating proteins -- grilled chicken, cattled-fed beef, eggs; veggies -- zucchini, asparagus, tomatoes, spinach, lettuce; and fruits -- pineapple, peaches, melon, strawberries, blueberries. Grace is not a big vegetable lover, so she eats more fruits. We also added a baked sweet potato the other night that made a big difference in our energy level.
We have done away with sugar, fats, dairy and grains. We both feel like we've slimmed down and I can't complain about the food I'm eating. Most mornings I have an omelette with tomatoes and spinach. Lunch is usually a salad with some left over chicken added, along with walnuts, tomatoes, cucumber and dried fruit. 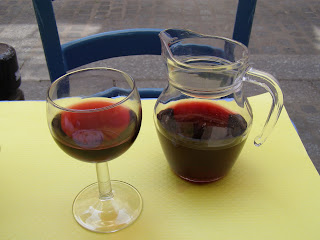 Last night for dinner, Earl grilled some yellowfin tuna steaks with a kind of vinaigrette, and we ate it along with asparagus and canteloupe. I cheated and had a glass of wine to relax with my husband.
See, that's all good food and when we get hungry we grab a banana or a peach.
We plan to stick with it until we leave for Florida and then it's vacation food all the way.
at July 27, 2010

That's great! My husband did p90x and he lost 30 lbs. He had to stop for a while, he was only on week 7 or something. I had to stop exercising too Zumba and Body pump because of my heel tendon.
I'm hoping to go back to exercsing soon, I need to lose another 20lbs.
I guess it doesn't help that I just ate a bag of M&M Peanuts:(

Oh my god! You would choose today to write about all the healthy foods you are consuming.

While biking this morning, the whole town smelled like donuts (there is a commercial bakery somewhere in town), so of course I HAD to go buy donuts, and then I HAD to eat 3 1/2 of them (sigh). I ate them so fast that I barely tasted them.

p.s. That "white" asparagus still freaks me out a little.

Lucia, It seems like guys lose weight so easily, doesn't it? Zumba was hard on my knees when I tried it, but I can still keep running.
Dream Girl, I know. The campus always smells like donuts because of the Kroger bakery. It's really tempting. The asparagus was one of the few photos I had of healthy food! Don't have asparagus nightmares.

I don't do hard core exercise. I feel lucky to do a combo walk/sort of run every day.