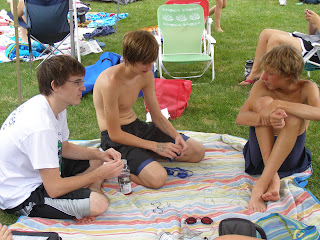 David Sedaris tells a terrific story about overhearing a conversation on the Metro by some American students who debate which city is better, Paris or Austin. After all, in spite of Paris' benefits, Austin does have air conditioning and the Sonic burger. One of the points he makes is that no country or city has the motto: "We're number two." Everyone thinks they're the best.
Yesterday, Tucker's motto was "I'm number two" as he came in second in every race he swam at the day-long, outdoor swim championships. Tucker is a great swimmer and he is used to winning everything in the outdoor swim meets, because the swimming isn't as competitive. At championships, sometimes swimmers show up who might not have been at the regular meets. Every race Tucker had Wednesday was against a boy named Orion, like the constellation.
And Orion's times were much faster than Tucker's.
When I saw him on the blocks, I thought he looked like a man and wondered how he could be 14. Tucker is big for a 14-year-old, but this guy had the pecs that stand out. Gulp!
Each time Tucker returned from a race, having taken second behind Orion, he had a little more information about the boy. He was homeschooled, Tucker said. Of course, so was Tucker for six years.
He's graduating from high school next year. Okay, Tucker is not doing that.
All of Tucker's times were good. He dropped seconds in each race, but always came in second to Orion.
"I'm sorry, Buddy," I said to Tucker. "I knew I should have named you after a constellation."
"Yeah," Tucker said. "Little Dipper."
at July 22, 2010

Tucker's so witty. :) So did it motivate him to try harder or make him not want to continue?

LOL. Always seems like there is someone better out there.

Your son has a great sense of humor, and the competition was good for him. It made him try harder and he did his personal best too. I love the way you write just happened onto your blog.