With the temperature in the mid-80s rather than the mid-90s, we decided that a bike ride would be a perfect family night.
It was a little complicated with five people and five bikes. We ended up taking two cars because the bike carrier holds three bikes, so we put the top down on the convertible and stuck two bikes in the back of it. Of course, one of our bikes was missing because Tucker had ridden it to a friend's house and left it where it was locked in a garage. We borrowed a bike from Earl's sister's husband.
Spencer was focused on getting family night over with. "How many miles?" he asked.
Eleven there, eleven back with ice cream in between, I told him. 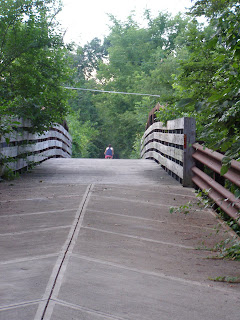 And he took off. The bike trail runs from Johnstown to Granville. The trail is shared with walkers and runners and crosses several roads, most of them not too busy.
As we started off, we came to a wooden bridge. A squirrel ran onto the bridge at the same time Spencer rode onto it. The bike scared him and he scurried across Spencer's path then ran and dove off the edge, hopefully onto a tree.
That was about the last we saw of Spencer as he decided to ride ahead. He later told us he managed the whole 11 miles in 35 minutes. He turned around and came back to find us since he didn't know where the ice cream shop was. 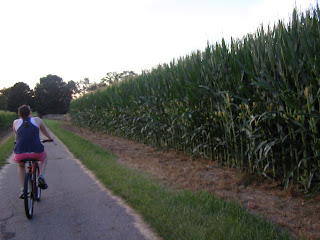 The path goes through woods and farm fields. It was full of strong odors, like skunk and cow manure. It also had butterflies and birdsong. The woods were protecting and ominous. The fields full of corn that stretched as high as an elephant's eye.
Tucker's bike has issues. Earl says it's because he throws it on the ground when he finishes using it. I say they should have put a kick stand on it if they didn't want kids throwing it to the ground. Nevertheless, he would be riding and the chain would just pop off and he would pedal going nowhere until it reattached.
I found this hilarious. Him, not so much.
Some swear words were thrown around when we left the flat path of the trail to climb the hill up to Granville. It's a steep hill and I called "every man for himself" before we got to it.
Earl and I rode on the street, but the kids all headed for the sidewalk, which meant they couldn't pass each other so were limited to the speed of the person in front of them. Anyway, they all made it to the top without stopping to push their bikes, which is more than I could say for myself the first time I did it. 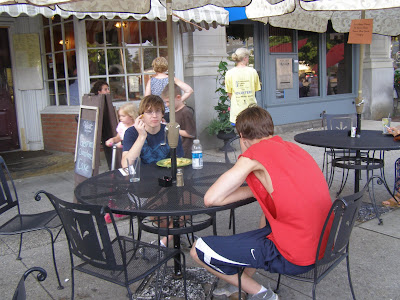 The ice cream parlor in Granville served up floats and milk shakes that helped get us the 11 miles back to the cars. 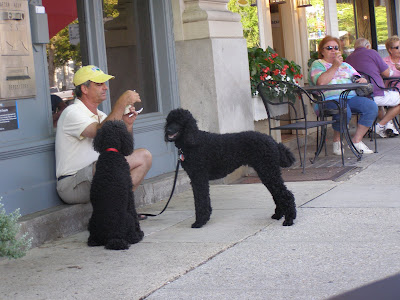 This guy fed ice cream to his dogs. He made them take turns and share a spoon. He used a different spoon and somehow thought that was sanitary, even though they were all eating from the same bowl. Ick.
After ice cream, Tucker needed a grilled cheese. Grace and I headed back to the trail while he waited for his food. We knew we would be slower than the guys. We rode steady for a total 64-minute ride on the way back, along with a few stops for photos. I figure less than a 6-minute mile isn't bad for us.
The boys stayed at the ice cream parlour to eat the grilled cheese sandwich then took off at a pace that might have done the peloton on the Tour de France proud. They shoulted a hello and Spencer's red shirt billowed in the wind as they passed and rode toward the lowering sun. 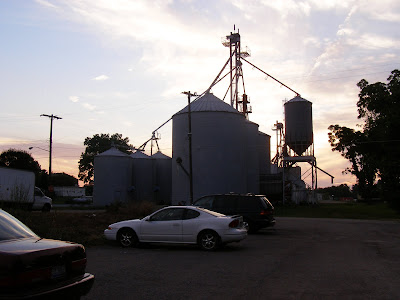 The sun was setting as we finished at the grain mill in Johnstown.
We were all pretty tired when we got home, except Spencer who of course ventured out to "hang" with his friends at "the turf" which is the high school football field.
at July 12, 2010

Sounds perfect to me. My brother used to order a double scoop of ice cream and share it with our family dog. They would take turns licking it. Can you imagine??? Grossed me out. I think that was half the fun for him.

Whoops, that was from me, Gina

I loved this, Paulita! I could really picture this ride.
-Tracie