I get up sometimes before the sun, so I try to get to bed early most nights. The other night I was in bed by 10:30. I was awakened at 11:50 when Spencer came in and kissed me on the cheek to let me know he was home.
Then, around 12:30, Tucker climbed into bed next to me.
"I can't sleep," he said. "I keep thinking about what happens after you die." 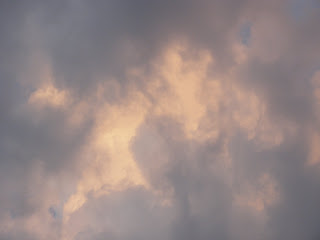 Maybe I should have anticipated this question.
A boy from his school died last week after he touched some live wires. The boy, a tall lanky kid with curly blonde hair, was on the track team with Tucker. Tucker declined the opportunity to go to the candlelight vigil.
But this week, as he lay alone trying to sleep, the question began to haunt him. Where was this boy now? What happens when people die?
We are Catholic, so Tucker has grown up hearing stories about Jesus, and he knows the timeline includes some point in the future when there will be "a new heaven and a new earth."
I couldn't bring myself to remind Tucker of that story in the dark of the night. It seemed too much like a fairytale that I would tell a six year old.
I told him that I thought there was more after this life. That our spirit doesn't just snuff out.
"What happens?"
He's 14. He wants black and white.
"Maybe we come back again," I suggested.
"Everybody?" he asked.
He realized that I wasn't able to comfort him in my groggy state. He decided he would read his "boring" book for Honors English and that he would probably be able to sleep once his dad got home from work, and he stumbled away without a definitive answer.
That's one answer, whether morning or midnight, that I won't be able to give him.
Maybe I should tell him about some of the near-death experiences that people have written about. They tell the same stories about a bright light and seeing figures. They talk about watching the efforts to revive them and the wonderous feeling. That's about all the hard proof we have.
I do believe in God and I believe that there's an afterlife, but I don't believe in hell, which makes it harder to think there's a heaven where everyone is having a big family reunion.
Maybe our spirits stay close to those we love. Maybe we all hover some place waiting to be needed by our loved ones. And when they need us, our spirit goes to comfort them with a familiar smell or a feather on the ground.
at July 31, 2010

Tough questions. I don't believe in hell either. Before my favorite aunt died she told me she would return with butterflies. I have a lot of lavender and so have tons of them every summer. I don't know if it's her or not but I always think of her. The first summer after she died we were sitting on the porch eating and a butterfly came and sat on my arm for a long time and then flew over to my husband and did the same thing. I just knew it was her.

Linda, That's a great story. People are always have experiences that show the ones they love are still with them.