This morning I didn't write from 5 to 7 a.m. That's because Grace and Tucker had to be at a swim meet at 6:15. Waking teenagers to swim at 5:45 a.m. is never a cheery event.
Tucker has been swimming year round since he was 8 years old. Even that first year, he showed promise, making a "star time" in back stroke and free style. Now as he wrestles his way through his thirteenth and fourteenth years, he wants to give up swimming. He has fought me about practices since last fall, complaining each time that I send him out the door with his black Speedo backpack. He swam for the middle school last year and is already faster than most of the high school boys.
Today was a USA meet rather than a YMCA meet. That means the fastest swimmers from around Ohio, southern Michigan and northern Kentucky gathered at Ohio State to swim this morning.
The air was cool as I dropped Grace and Tucker before parking in the garage. They both dogged it on their 100 free, their first events. Then came the 50 frees.
Tucker ended up fifth overall for the 13-14 boys. That means he made it into the finals this evening. USA swimming uses the times in the morning for preliminaries. The top 8 come back to swim the finals and the next 8 come back for a consolation round.
From the stands, I told his coach that he wouldn't want to come back. Tonight Columbus celebrates Fourth of July with Red, White & Boom. Tucker asked earlier this week if he could go to a party to watch the fireworks.
The coach talked with him for a minute, turned toward me in the stands and said, "He wants to come back."
"Okay," I said.
As soon as we left the building, he told me, "I don't want to go back tonight."
"You already told the coach you'd go," I replied. I really didn't want to hash this out. The coach had talked to him; he'd agreed, why did we have to talk about it. Or, more precisely, why did I have to listen to him complain. He is four-tenths of a second behind the first place finisher. Hundredths of a second behind the second through fourth place finishers. He could win this.
Sometimes I wonder if it is worth the constant arguments about swimming.
Pat, one of the dads in the stand with me, said, "If I were as good at anything as Tucker is at swimming, I'd keep doing it forever."
That's just it. When you're 14, you're pretty sure you can be good at anything you want to. You may not recognize that this is a special talent you have.
As we headed back to the pool at 4:30, Tucker said, "I'm not going to do as well as I did this morning."
"Why?" I asked suspiciously. Was this his plan? 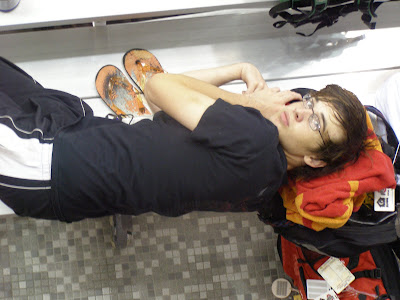 "I'm tired," he said.
"I'll let you stay out until midnight tonight if you swim a faster time than you did this morning," I offered.
Game on. Usually he has to be home at 11.
He warmed up then sat and waited. He went to the diving well and warmed up some more.
Finally, it was his turn to swim. 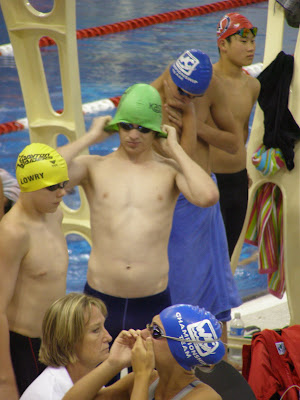 They were swimming long course, which means they swim 50 meters all the way down. Most pools have a lane that goes 25-yards across then they come back 25 yards.
Tucker climbed on the blocks, his cap a bright green. 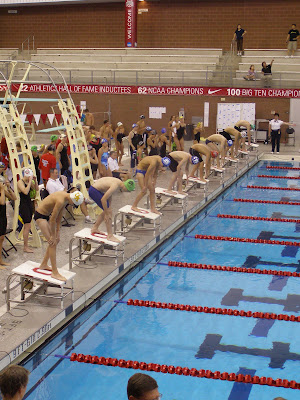 He dove in the water and moved his arms fast. He was ahead for much of the race. He finished in second place overall and dropped more than half a second. For anyone who cares about swim times: he had a 27.66 in meters long course. That translates to a 23.79 in short course yards.
I could tell he was proud afterward as he walked me through the race.
"Those other guys were all wearing Speedos and I wanted to show them I could beat them not wearing a Speedo." Tucker hates those little suits like underwear. He wears the suit that comes down tight to his knees. The guy who won wore a suit like Tucker's. 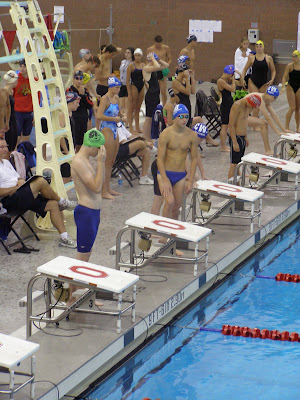 As we walked through campus, emptied by the holiday weekend, Tucker was satisfied with his hard work for that day. That doesn't mean that we won't argue again on Monday when it is time for swim practice again, but I plan to make him stick with it.
at July 02, 2010

It does sound like he really hates a talent and I know you hate to see him not use it. I had the same thing with piano lessons. My oldest son was so negative about it that we let him quit and, of course, now he says he wishes we had made him coninue.