This summer, Earl cleared the garden in front of the garage and planted strawberry plants. Strawberry plants come back every year and they spread. They shouldn't be allowed to grow fruit their first year. Instead, Earl had to pull off any flowers so the plants would grow well.
After the first few weeks, a couple of volunteer plants stuck their heads through the soil in the strawberry patch. A tomato plant began to grow in the front corner away from the strawberries, so we left it. Then some sort of melon began to grow right in the middle of the strawberry bed. We love a good melon at my house, so we let it grow too.
We weren't too surprised about the volunteer plants since we had grown tomatoes and melons there the previous year. 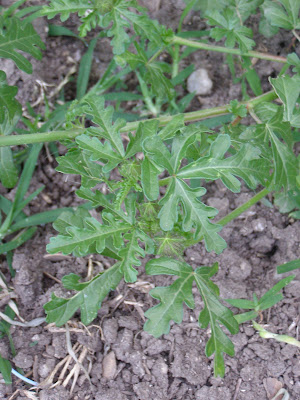 Here's a picture of the leaves on the melon plant.
All of a sudden, the melon plant began to grow up instead of crawling along the ground. And then it sprouted this: 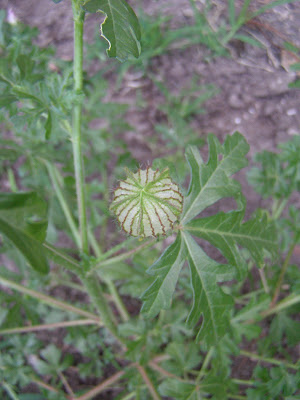 Something that was not a melon was definitely on its way.
And mid-morning, the plant would flower into a tiny yellow bloom with a reddish center. 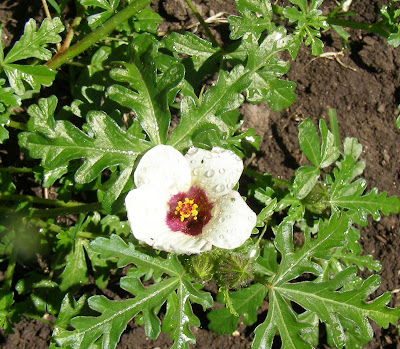 It closed again before noon, so I was the only one in my family who ever saw it since everyone else slept most of the morning.
One morning, before the sun became ferocious, my neighbor Sandy joined me in the garden with a couple of wildflower books. We searched until we found the same bloom with the same leaf shapes. It was called "Flower of an Hour." Well, that made sense because it only bloomed for an hour. And it was a wildflower from "Eurasia." Truthfully, it was a weed.
Earl asked if he could pull it since it was a weed. I said no.
"Why?"
"Because it's pretty."
And in spite of its beautiful blooms, as it grew, it began to look weedier -- tall and rangy.
Finally, when Earl asked his weekly question about pulling the Flower of an Hour, I told him to do it.
Now our nobbly strawberry patch is without the gangly weed in the middle.
Here are a couple of actual flowers growing around our house. I'm not going to let Earl pull them. This is a Chinese bellflower, or a baloon flower, and I love it. 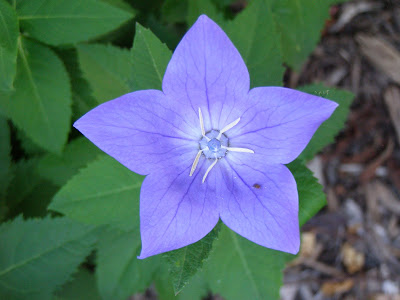 This is how it looks before it blooms, like a Chrysler symbol. 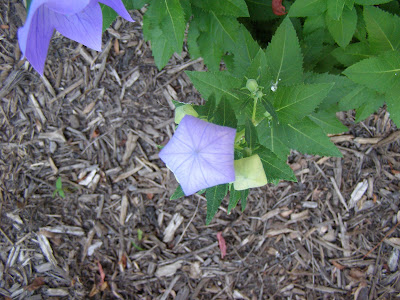 We also have a rose bush for the first time at this house. 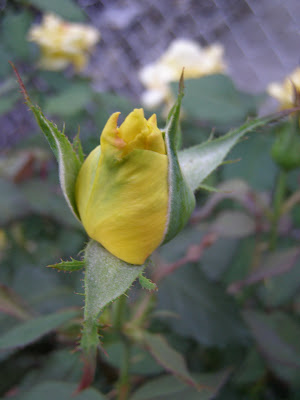 It has bloomed for nearly a month now.
I don't spend a lot of time on flowers. I usually plant some things in the spring and hope they continue through the summer. About this time of year, I run out of color in my garden. Before long though, the mums will begin to bloom and I can stop worrying about whether the neighbors are whispering about my garden or lack of it.
at July 15, 2010

I didn't have time to plant a vegetable garden this year. I am going to miss those tomatoes.

FYI, the anonymous comment is in Portuguese. Translated by Google Translator, it says, "I loved this headline our congratulations."

Linda, I just picked our first tomatoes this morning. Wish I could share with you.

Hey! Thanks for identifying the wildflower/weed that I find in our yard every once in a while. I think it's pretty too, so I let it grow whenever I find it.