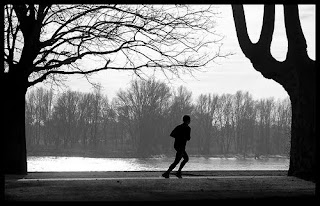 On Saturday morning, we ran 9.5 miles.
When I left the house, I was already tired and dreading it. If my friends hadn't been waiting for me, I would have skipped. That's the reason to exercise with friends, isn't it?
I took some vitamin B12 for energy and ate two shot bloks on the way to meet my friends. Shot bloks are like gummy candies that are "electrolyte chews" to give energy and replenish the things we sweat out.
Princess joined us for our morning run, so there were four of us. Princess just bought a new house and moved so she has a legitimate excuse for missing some of our runs. She also is a single mom with a son, so she always has a good reason to sleep in rather than run with us.
We ran our normal route of 7.5 miles, talking and laughing the whole way. I ate two more shot bloks at the turn around, but I wasn't feeling as miserable as I had anticipated.
We went on past the parking lot an extra mile south before we turned around. That made for a total of 9.5 miles. The training schedule called for 9 miles and we're trying to keep that .5 edge.
I "sprinted" the last half mile or so, but only because if I didn't run faster and finish then I was going to stop and walk. I felt good at the end and relieved it was over.
When I got home, I drank more water and sat down to finish reading a book. Slowly I began to feel like a dishrag that had been rung one way then the other. Nothing really hurt, I was just exhausted.
My husband got up and came into the living room where I was lying on the couch. I explained why I was taking a nap at 9 in the morning. My daughter got up and I repeated the scenario.
The rest of the day, the headache slowly built. Dehydration? Possibly. Maybe I should have had Gatorade after my run. Allergy headache? Always a possibility in Ohio. Hormonal-related? The timing was right.
I pulled myself together for a cookout at Earl's sister's house then spent the rest of the day doing nothing. Grace and Tucker stayed home with me since they had been out late the night before and I was in bed early, hoping to vanquish the headache with a good night's sleep.
The next morning, a trace remained, but I didn't even notice it as Grace and I did our morning core workout.
Is it worth it to continue training for the marathon, even though I don't plan to run the marathon, if I'm going to face days when I feel like a limp noodle?
at July 05, 2010

glad you're feeling better today. maybe you need more iron, isn't that what Sarah was having problems with?

I admire anyone who can run that far. I feel proud when I do my piddly 30 minutes a day.