When I was in 7th grade, my best friends were Bonita and Leisa. We talked about boys and the changes in our bodies. We ate Doritos and M&Ms. We went to the movies and walked over to McDonalds. I should have seen the signs. When I would say something, they would look at each other, as if they had talked about this in private. They laughed at the way I said TV, like tevie, and suggested I wax my upper lip. I shouldn't have been surprised when I received the very mean note that ended our friendship. 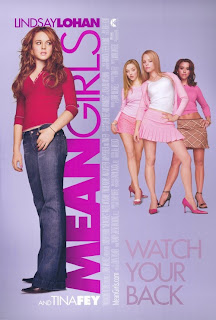 I sobbed as I waited in my mom's car to go home. My mom was a teacher at the middle school. I couldn't imagine ever going to school again. Who would I sit next to? Who would I eat lunch with? I hated them.
For some strange reason, I showed the note to my older brother, who barely tolerated me, and my father. They both had the same advice. Time to get new friends.
I didn't want new friends. I wanted my old friends back. I wanted things to be the way they were before. And eventually, I was back in the fold, a little gunshy, a little more eager to please my friends.
That story has been haunting me this winter as Grace has friend struggles at college. When people hear how those friends have rejected her, they suggest they aren't really her friends any way. That's true. They haven't handed her a note saying "We hate you" but they have all paired up for rooms next year and left Grace standing alone. She has born up well, applying to live in a dorm that she really wants even if it means an unknown roommate. She's taking a dance class and added swing dance one night a week. She's working at the theater, going to classes. So why does it still hurt so much when those same friends just reconfigured to add a third girl to their room, again with no mention to Grace.
She hides her tears. She calls me. She watches old movies and slinks off to the dining hall with other people from the dorm, but this rejection hurts so much. She doesn't get to come home each night to hugs from her family.
All of the successes at college feel drowned out by the decision of the girls that Grace is not worthy to be considered, to be included.
She thinks about the grayness of the sky and the depth of the snow. Maybe she has Seasonal Affective Disorder. Maybe she should go to school some place where it's warm. But even bright sun outside wouldn't warm the chill that has settled over her in the dorm.
Making acquaintances should be fairly easy. Now in my 40s, I could easily take a book to the dining hall and eat alone, or pull out a chair next to some unknown people and strike up a conversation. I don't think I could have done that at 19. The idea of starting over in the friend category is overwhelming.
Sometimes late at night we talk about what might have happened. How could these friends who shared deep secrets, who trusted Grace with their darkest thoughts, simply turn away? Maybe they were never true friends. Maybe they were and Grace changed. Her life was fraught with drama Fall Semester -- quitting swim team, dropping a class that she thought she would major in, taking a part in a play that was outside her comfort zone. Yet, she survived it all. This semester all her drama has come from her inner circle -- the people she thought were her friends.
The idea of all new friends is overwhelming. Still maybe she could start with one. Maybe that boy in her history class would meet her for coffee. Maybe the girl in her French class would go to lunch with her. Maybe she could take a yoga class and stop for smoothies with the girl on the mat next to hers. It's a process of inches and she needs to eek along for six more weeks. Six weeks is a long time when you're 19 and alone.
Were you ever rejected by your friends? Were you a mean girl who did the rejecting, kicking someone out of your circle? Do mean girls go on forever, or does it stop after high school, after college?
at March 28, 2011

I know its hard to keep this in mind when you are in the midst of these friendship issues. Grace is going to go so much further than the walls of that college dorm room. she has big European plans and true friends that she will get to share that with. Hopefully, Beth, Marie and Grace will reunite in Paris and make fabulous memories. And she will keep making new friends along the way, you never know which of those friends will end up being the true friends that you keep forever. But each new experience opens you up to that possibility if you let it.

That all being said I think a transfer to a warmer, closer campus is still a good idea!

we love you Grace!

Yep, so much one can say about this isn't there. My daughter is going through this now too. Why are girls so nasty to each other?
I used to see this pre kindergarten on our street.

Thanks, Sheila and Lucia. It's good to know Grace isn't alone. Hope Marina survives her middle school ordeal.
Grace and a friend who's a boy decided to request the same hall next year, so at least she'll have that. Boys seem safer friends than girls, until they want to be more than friends.

Grace can chat with Mirae sometime about friends at college. Mirae moved out of her house of 'friends' the beginning of her sophomore year and moved into a new friend situation. It ended very nicely though a ROUGH year.
There's a book about ups and downs of women/girl friendships...Best Friends by Apter and Josselson.
I reread it when I need to remind myself and my daughters of the universal :) and :( experiences.

<3 Love to Grace <3
Tell her the other girls are cake sniffers, we think she's the best and would LOVE to room with her.

I think the freshman year is always tough. I had a horrible roommate my freshman year but to my surprise and delight, a nice girl I really liked asked me to be her roommate and we became life long friends. It's hard being rejected. I've been there.

Girls / Females can be sooo nasty and bitchy.. NO not me , I got picked on all the time for the shape of my chin.... they called me names all of the time ..!!

I am sure your daughter will find TRUE friends .. travel to Paris , see the world and have fab memories for a long time to come .... ♥

I'm really sorry to hear that Grace is going through this.

I'm not sure why it hurts so much but it does. Why does slamming your finger in the screen door hurt.

Yes it can happen at work too. My current job is the first time I experienced it. Once I was able to to see, it was being done to other people as well, was I able to take it less personally.

It still happens from time to time, and it's still painful but now I know it's not really about me.

Guys, Thanks for your support for Grace. She reads regularly and I'm sure she feels your love and support.

That I do. Its like having a support group of aunts, mothers and big sisters. Thanks everyone for your love and kind words.