My friend Sheila, who used to blog before she became an international traveller two weeks ago, sent an update to her friends as Paris fashion week is winding down.

It’s so much more work than either Beth or I imagined. The emotional stress is also so much more than I would have thought. But at the end of the day Beth loved it. It’s a hard life being a model. It’s definitely not all glitz and glamour....it’s constant travelling never knowing where you’re going to be next. College would be so much easier than all this.


I don't think Sheila actually expects people to feel sorry for her daughter who has become an international model in the matter of a month. 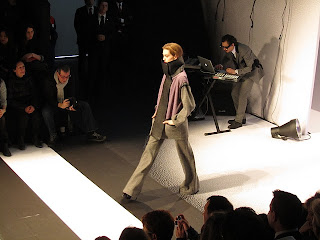 And the hours that Bethany has spent going to castings and fittings before waltzing down the runway sound exhausting. Many days she worked 14 hours without time to stop and eat.
She was booked for shows then cancelled at the last minute. She was rejected because she is too skinny -- too skinny to be a model? What did they expect when she didn't have time to eat?
In spite of the excruciating hours and the emotional highs and lows, modeling has some benefits that college would not have. 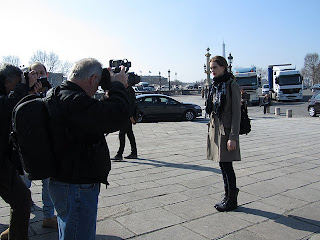 Even though Beth travelled to New York city alone, she had a strict schedule she had to follow. Nearly every hour was planned. Believe me, that cuts down on the emotional highs and lows that come from the many unscheduled hours in college where teenagers can wallow in their loneliness.
Bethany had planned to go to college in Ohio. Instead, she started modeling in New York City, flew to Milan then on to Paris. Modeling has allowed her to travel the world.
If Bethany had gone to college, she would have to pay the $20,000 yearly tuition, or find grants and loans to pay for college. As a model, she'll be paid for shows and her work. Of course, Sheila still has no idea how much money she has made or how much the expenses of the trip will cost.
As a model, at least in Paris, when Bethany exits the buildings she has to stand and allow the paparazzi to snap her photo. If that happened at college, it would mean she had a stalker.
As a model instead of a college student, Bethany does not have to read any more than her daily schedule. At college, she would have to pay for expensive textbooks then read them by the deadline, along with writing papers and studying for tests.
The best thing about Bethany deciding to forego college is that, after two weeks away from home, Sheila was able to fly and join her. She can smooth her hair and kiss her goodnight. Even when they're in a foreign country and Beth feels tired and may snap at Sheila, they aren't separated for months at a time.
That is something that, as a mother, she could not have done if Bethany had gone to college. When they go away to college, the most a mother can do is send calming words across the phone.
So, in spite of the long hours and hard work,even though it isn't all glamour and easy cash, I'm envious of the new life Bethany and Sheila have. Not just because they get to visit exotic locales, but because they get to be together.
at March 09, 2011

Don't be jealous yet of all that together time. After Beth's short break she will head off to places unknown without me by her side. And as soon as she can afford it she's moving to New York. The holidays and summer breaks that you guys get to spend together are going to be looking pretty nice once that happens.

Whatever our kids do its hard when they leave home.

I wonder how long your friend will be able to be with her daughter? It is a good chance to see the world and make money. Sounds exciting until you really get into it.

One more day mom, then you'll get sick of me and be ready to send me home. I love you!

Grace, Yikes! You said send you home about school.