Even though the weather was cold, we stopped at Jeni's for ice cream after the last eye doctor appointment.
Jeni's makes its own ice cream with some daring flavors. I tried the goat cheese and fig but not nearly as tasty as the goat cheese and dried cherry that they serve in the summer. I also skipped the riesling poached pear. I've yet to try the Bangkok peanut flavor or the new corn syrup custard with whiskey and pecans.
The boys got trios, which cost $5 for three half scoops. The lids looked like a work of art where they left them lying on the counter.
Although Spencer's lid doesn't tell the whole story, he had cherry lambic and two scoops of dark chocolate. He took a bite of the combination and said it tasted like a truffle. Only the cherry left its mark on the lid. 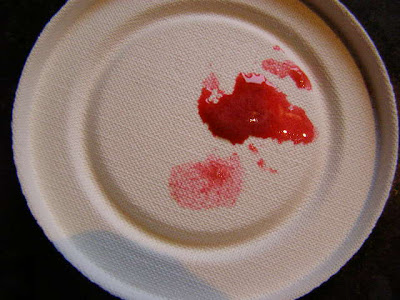 Doesn't it look like you could dip a paintbrush into it?
Tucker had a scoop of Buckeye (which is some sort of peanut butter and chocolate), a scoop of honey pistachio and a scoop of wildberry lavender. Here's how that lid looks: 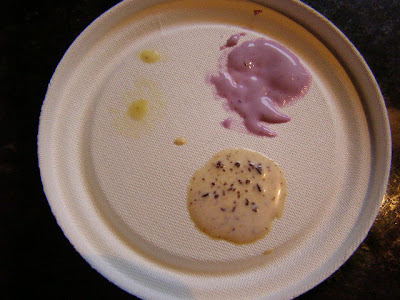 The cloth texture on the lids as they soaked in the ice cream inspired me. Too bad I don't paint.
at March 10, 2011

Makes me want to paint too.

Definitely time to make my Semi Annual trip over. Half the fun is trying everything.

Amazingly, I have never had Jeni's ice cream. That wildberry lavender is calling my name.